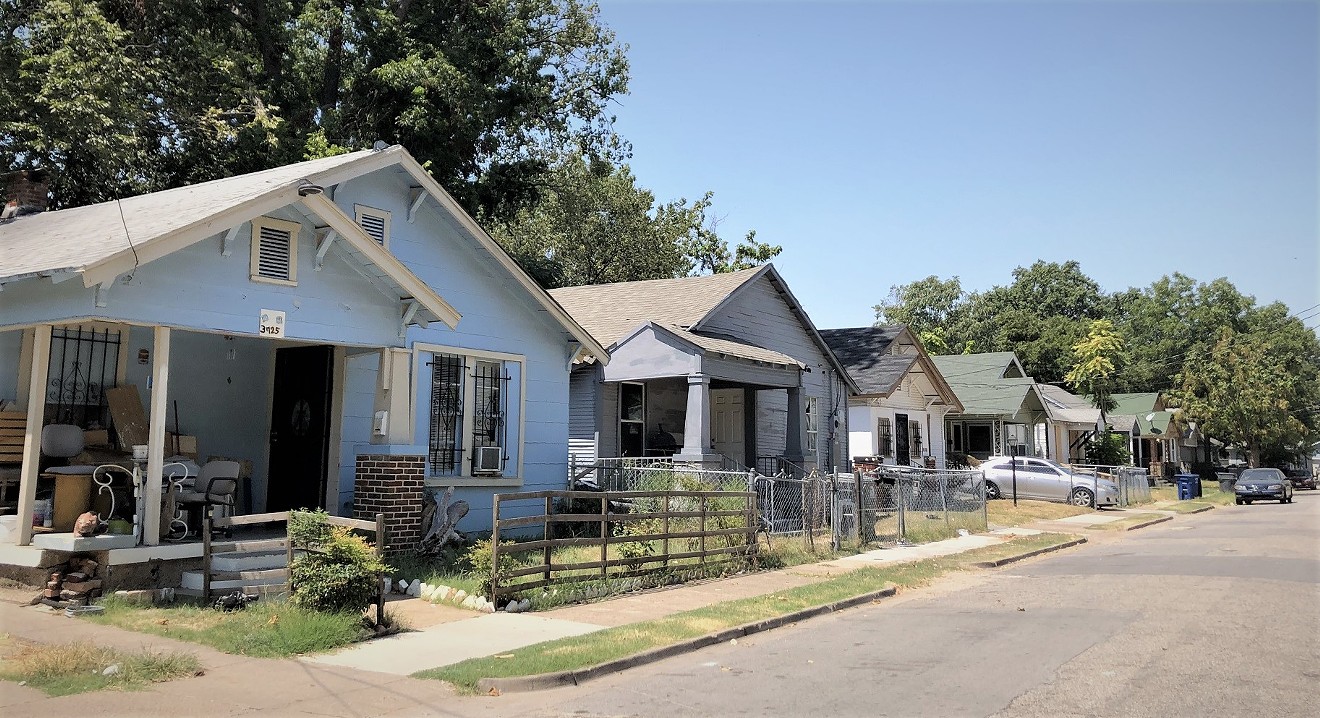 Guaranty Street in South Dallas. On this block, appraised property values increased by an average 92.34% between 2018 and 2019, up 110.25% since 2014. Jim Schutze
Just because something is below my radar doesn’t mean it’s below yours. Maybe you knew all about this, but I was astonished, mainly because it has been right in front of my nose for so long.

The part of South Dallas I’ve been writing about for years, near Jim’s Car Wash on Martin Luther King Jr. Boulevard — thought of by me and a lot of people as dirt-poor, high crime, racially segregated — may be all of that. But guess what else it is. It’s one of the hottest real estate markets in the city. Probably the hottest.

No, listen, I’m not talking kumbaya or pie in the sky. I’m talking numbers. The escalation in values set by the appraisal district is breathtaking. We’re talking whole blocks that have gone up in appraised value by 43% to 92% in one year, some individual properties soaring by 300% to 2,500%. In a year.

There’s no big thing there to explain it. Yet. No Walmart, no golf course. People have theories. I’ll come to that. But right now it’s just a flat amazing increase in land value.

When I decided to look at South Dallas, I compiled a spreadsheet. I took real estate values from the appraisal district’s rolls for 47 properties on two blocks.

One is a block away from the car wash, about which I have written two million articles. The other block I looked at, which I chose at random, is nine blocks southeast of the car wash, deeper into residential territory away from the commercial arteries of MLK and Malcolm X Boulevard. 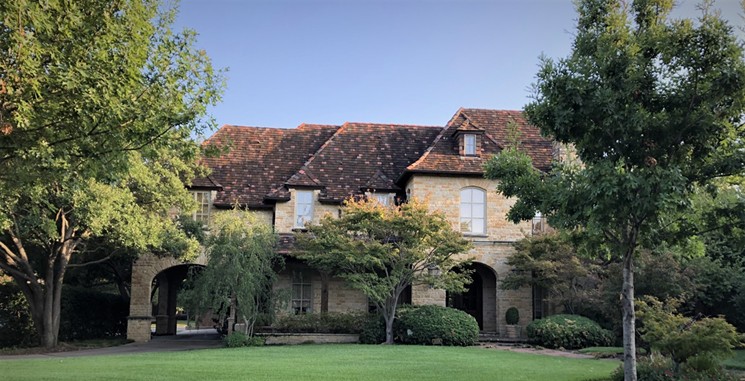 The appraised value of this house on Marquette Street in University Park decreased by $98,570 between 2018 and 2019.
Jim Schutze
The first block is bound by Peabody, Myrtle, Pennsylvania and Malcolm X — residential with some commercial property at the Malcolm X end. We’ll call that Block One. The second block is bound by Metropolitan, Ruskin, Romine and Guaranty — all residential. Call that Block Two.

To put this in context, I also chose a block at random in the wealthy enclave community of University Park. Let’s call that Block Three. That block, all residential, is bounded by Turtle Creek Boulevard, Marquette Street, Thackery Street and Colgate Avenue. Between the 2018 and 2019, the total value of Block Three appraisals decreased by just over a quarter of 1%.

If you drive all three blocks, the most striking comparison will be how grand and sedate Block Three looks and how tumble-down and modest the other two look. So you might tell yourself, “If I’m going to invest any money, I’ll put it in that Park Cities block, because it’s so much richer.”

But I think if you bet all your chips on the Park Cities block, you might wind up sorry. Let’s imagine you had bought all of Block Two in South Dallas at its 2018 appraised value. It would have cost you over a million bucks, $1,128,070.

If you had held on to Block Two for one year and sold at the 2019 values, you would have earned a profit of $1,041,659.84. Not bad. By betting on South Dallas, you would have doubled your money in one year and made a million bucks. (This assumes the appraised values are close to market values. That's a big assumption, I know, but you get the point.)

In a city mummified by assumptions about real estate, and I absolutely include myself, what I am learning about South Dallas is breathtaking. The best investment opportunity in the city probably is South Dallas.

I have a former neighbor who is a very successful real estate speculator and developer. Like many wise people, he doesn’t want to be associated with me in public, so I won’t name him. I don’t really know where he lives now. Paris and the North Pole maybe. Not where I do. But he was back on the block a couple of weekends ago visiting somebody. He stopped his truck while I was walking the dogs, and we chatted.

I told him I was working on a lot of stuff in South Dallas. I said I had just written a piece in which I revealed that a huge developer, Matthews Southwest, appears to be interested somehow in Martin Luther King Boulevard in South Dallas. My former neighbor kind of looked at me, like, “You call that, ‘revealed?’”

He said, “It’s the hottest real estate in the city, Jim.”

I think I said, “No,” and he said, “Yes,” about four times. But this guy definitely would know. He told me he used to buy up large numbers of properties in South Dallas at tax sales. He blocked them up into packages, and then he did something with them about “creating notes,” which I don’t understand. I create notes all day long, and I get bubkes.

He told me he stopped going to the tax sales a couple of years ago and stopped buying in South Dallas, because the soaring values there were making his game too hard to play. What’s driving it? I asked him.

He wasn’t off the block 10 minutes before I went to my computer and started looking at the appraisal district. I couldn’t believe what I was seeing. I poked around in other blocks and found the same thing. Some blocks are hotter, some less so, but overall the values are surging. I needed answers.

Among a few people to whom I went for answers, former Dallas Plan Commissioner Betty Culbreath was top on my list. In the ’90s, she was the first-ever non-physician to head the Dallas County Health Department. Later, when she was on the plan commission, Culbreath learned everything there was to know about land values in the region. She lives in Duncanville now, but she has been a landowner in southern Dallas.

She was a bit blown away, too, when I ticked off some of the values I was seeing at the appraisal district. But then she said the same thing my former neighbor did. It’s time.

This house on Ruskin Street increased in appraised value by 215.83% in one year.
Jim Schutze
She remembered telling property owners in South Dallas in the mid-1990s not to sell. “I said, ‘Folks, y’all need to hold on to your land, because there is nowhere else for development to go.’

At one end of MLK is Fair Park, the 277-acre exposition park where the State Fair takes place every year. At the other is the area now called The Cedars. It used to be called don’t-ever-go-there, a warren of burned-out warehouses and very bad-looking hookers just a few years ago, now the city’s new, cool lofty-shmofty zone pioneered by Canadian developer Jack Matthews. MLK is the spine connecting the Cedars with Fair Park, with one of the city’s best private schools, St. Philip’s, in between.

Culbreath told me she thinks a new management contract at Fair Park, masterminded by former City Council members Philip Kingston and Scott Griggs, is a major factor in what’s happening right now at one end of MLK. At the other end, she sees big money lurking.

“Something about the new Fair Park contract and the possible revitalization of Fair Park and making it a destination," Culbreath said. "To me, that’s part of what’s driving the train. Then remember (Mavericks owner and billionaire) Mark Cuban’s got that little piece off of Kiest Boulevard (to the west). They’re getting ready to build him a dam so his property will be secure from flooding.

I’m going to write more about this next week. One of the most dramatic and brutal consequences of the soaring values is in property tax bills that people are getting. I looked at residential owner-occupied properties not protected by homestead exemptions where tax bills are increasing four- and fivefold in a year. For poor people, that’s a bulldozer.

Where in Dallas — where anywhere — can an elderly couple living on Social Security without savings or assets beyond their house buy another home for $37,900? If they lose all of their neighbors and friends, what does that cost them? Can they pay the taxes on a new house?

Don’t get me wrong. We are looking at something huge and absolutely wonderful here. But we also are looking at something huge and absolutely terrible. We just need to keep looking.
KEEP THE DALLAS OBSERVER FREE... Since we started the Dallas Observer, it has been defined as the free, independent voice of Dallas, and we'd like to keep it that way. With local media under siege, it's more important than ever for us to rally support behind funding our local journalism. You can help by participating in our "I Support" program, allowing us to keep offering readers access to our incisive coverage of local news, food and culture with no paywalls.
Make a one-time donation today for as little as $1.