The Search Continues: FBI in Dallas Is Still Looking for Alleged Capitol Rioters from North Texas The FBI is still on the lookout for Jan. 6 Capitol riot suspects. Photo by Andy Feliciotti on Unsplash
After the U.S. Capitol riot on Jan. 6, 2021, the FBI immediately started digging. Officials wanted to identify those who had entered the Capitol building, as well as people who had committed acts of violence against police and media workers.

More than a year has passed since the day that supporters of then-President Donald Trump charged into Congress, interrupting the 2020 Electoral College vote certification. But the search for North Texans who participated in the events of Jan. 6 continues.

Authorities are asking for the public’s help identifying insurrectionists who’ve so far evaded law enforcement. Earlier this week, FBI-Dallas sent out a description of one such alleged rioter who possibly resides in North Texas.

Dubbed BOLO [be on the lookout] 318, she’s believed to be a white woman with brown hair in her 60s or 70s and stands between 4 feet 10 inches and 5 feet 4 inches. She was pictured in a black jacket and a long-sleeve white shirt featuring a caricature of Trump. Authorities believe she also wore a green scarf and purple backpack.

The FBI say BOLO318 was seen in the Speaker’s Lobby. She also allegedly entered the Capitol building and, despite her petite frame, “was observed assaulting members of the media.”
click to enlarge 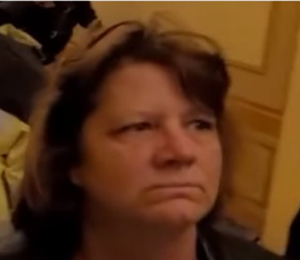 Federal authorities are on the lookout for this woman.
Courtesy FBI-Dallas


Shortly after the Jan. 6 riot, Democrats and Republicans largely condemned the storming of the Capitol, which forced Congress members into hiding and caused them to fear for their lives. Yet since then, many in the GOP have begun to change tack, reframing the riot as a protest and the rioters as tourists.

Some charged in connection with the breach have even run for office and bragged about their involvement while out on the campaign trail. Yet the FBI is working to ensure that the insurrection doesn’t become normalized.

As recently as last month, agency leadership has “made a push to help the American people understand how important it is … that the folks that committed these violent acts are brought to justice,” said spokesperson Katie Chaumont of FBI-Dallas, which covers much of the state’s top half.

Sometimes, internet sleuths aid the FBI in identifying a suspect, even if they don’t know the person themselves, she said. 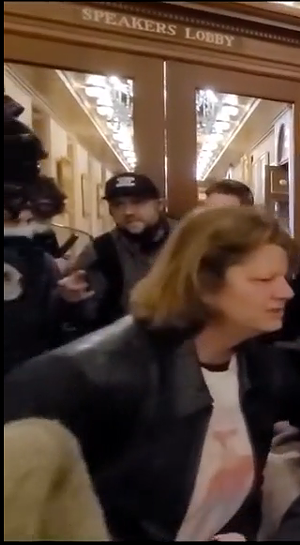 It's believed that she lives in North Texas.
Courtesy FBI-Dallas
Such sleuths assisted in exposing rioters from North Texas, including Frisco real estate broker Jenna Ryan. Last month, the Realtor was released from a federal prison camp after she had been sentenced to 60 days over her alleged participation in the insurrection.

Ryan was among several other North Texans who had flown from Denton to the nation’s capital in a private plane. Now, one of the plane’s other passengers, Jason Lee Hyland, has also pleaded guilty to a misdemeanor count of parading, demonstrating or picketing in the Capitol building. He could face up to six months behind bars.

Hyland and some of his comrades who attended the “Stop the Steal” rally on Jan. 6 went back to their hotel afterward, court documents show. But upon learning that their fellow Trump supporters had begun to swarm the Capitol, the group booked it back down to ground zero.

Once there, Hyland and Ryan remained in the Capitol building for a short period of time. Law & Crime reports that while inside, Hyland recorded himself saying that he was a taxpayer. Federal prosecutors have interpreted that to mean that Hyland felt a sense of ownership regarding the Capitol grounds.

The following day, Hyland and company flew home via the same private plane. His sentencing has been set for Aug. 2.