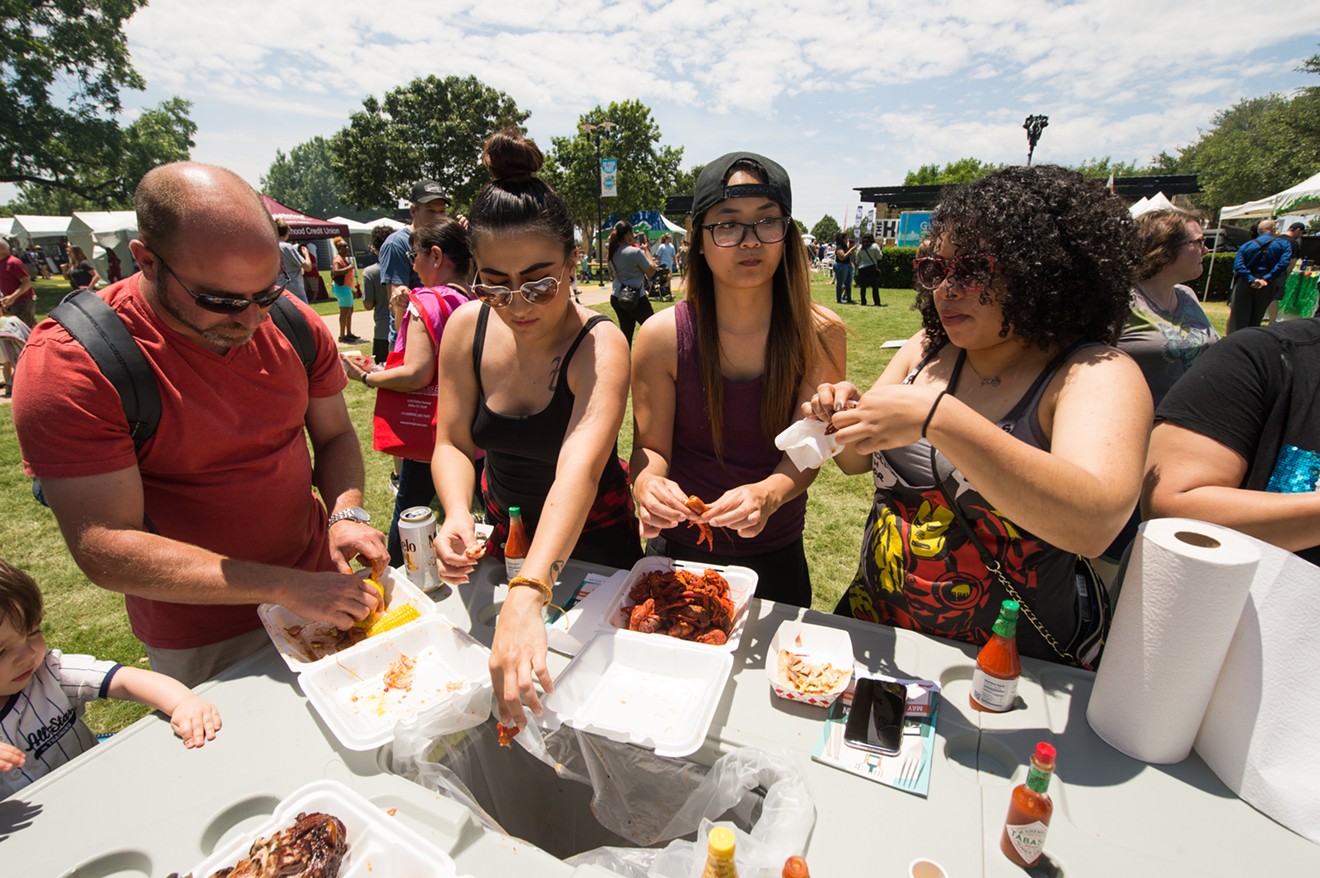 Taste Addison
We’ve been deprived of food festivals and events for so long that knowing what to expect from them in this post-COVID vaccine era is hard. Creative takes and virtual efforts stood in for some of our favorite foodie gatherings last year, but Taste Addison is back, and it’s live at Addison Circle Park June 4-5.

There’s much that’s familiar about this long-running festival, but several things are new, and I don’t just mean social distancing in the food lines. To be honest, some of the changes are so exciting we’d like to see them at all the food festivals all the time.

We've got the scoop on those changes as well as the basics (what, when, where), plus some fun facts about Addison’s food scene. Whether it’s your first time or your 20th, here’s a guide and some insider tips to help you make the most of Taste Addison 2021.

Sometimes the hardest thing about multi-day festivals is deciding which day to go. This year, your choices are Friday night (6 p.m. to midnight) or Saturday afternoon and evening (2 p.m. to midnight).

Sadly, the food-inclusive tasting room event, Friday Night Bites, has already sold out. That simplifies your choice a bit. Food vendors will be there for both days, so you just have to decide if you want to listen to long-time Dallas party band Emerald City followed by Flo Rida (Friday night) or a lineup including Lit, Hoobastank and Third Eye Blind (Saturday night).

Both days will feature music on two stages from these headliners as well as local singer-songwriters and the most popular local tribute bands.

Either way, get your tickets ($15 for general admission) ASAP. You can buy them online at the Taste Addison website.

To make the most of your day at the fest, plan to arrive early; you’ll almost certainly spend some time fighting traffic and parking. 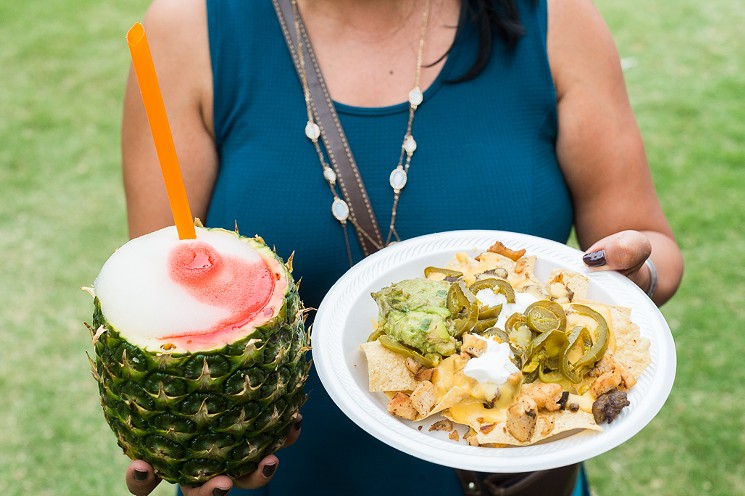 Nachos and a fruity drink in a community event? Dreamlike.
Taste Addison

You can skip parking hassles altogether by staying the night at a hotel. Several nearby hotels are offering discounts as well as a special Taste Addison package that includes event tickets and a tote bag.

The park is not 100% accessible, in that there are areas of uneven terrain, but restrooms in the park are ADA-friendly and there’s parking available at the nearby DART station for those with handicap placards.

Be sure to check the list of what’s allowed into the festival and what isn’t on the website FAQ page. The short and sweet of it is that purses and handbags are allowed; large bags, coolers and outside food aren’t. Strollers and children’s wagons are welcome, but don’t bring pop-up tents or lawn chairs.

The Restaurant Experience in Addison

It’s always hard to decide what to eat when you’ve got a lot of great choices, but in Addison, it can be a heavy lift any time, not just at Taste Addison. I’m not sure the city’s claim to the most restaurants per capita in the U.S. can be verified, but with 180 restaurants and only about 15,000 residents, it’s definitely in the running.

Sure, some of those are chain restaurants, but that came about because Addison was the first city in Texas to allow liquor by the drink, which permitted cocktails and spirits to be served in restaurants. This attracted restaurants like a magnet when other cities required restaurants to have private memberships in order to serve drinks or simply forbade it altogether.

Cantina Laredo and Great Outdoors were both founded in Addison and Fogo de Chao’s first U.S. location is there. The Chili’s in Addison was the second one ever opened and is the longest-running still-open Chili’s location anywhere.

Mix in quite a few independent restaurants and at least a dozen diverse cuisines and you could eat something different every night for weeks. At the festival, you’ll have to do all that in a single day.

Food Choices at the Festival

Among the booths offering various menu items and special $3 Taste Bites, you’re likely to find any cuisine you want, with options for all kinds of dietary requirements.

If “fair food” is a must for you, get (keto-friendly) turkey legs from Nate’s Seafood & Steakhouse or The Hub/Ron’s Place. The Lion & Crown Pub will have sausage on a stick.

Some of the $3 Taste Bites are also fest-food focused. Try the Mexican street corn on the cob from Cantina Laredo, fried avocado from Los Lupes or fried pickles from Nate’s.

I don’t know what it is but the ‘Texas Beef Cake’ from Savorista Kitchen and Catering is on my “want” list.

If you’re looking for gluten-free options (and even if you’re not), Fogo de Chao’s ‘Fogo Sampler’ or candied bacon and corn salad both hit the spot.

Once you’re full, or done with round one, head to the marketplace shopping area for some food to take home. Vendors will include Rickey’s Jerky, Nikki’s Popcorn Co. and Cowboy Candy Salsa.

No Need to Buy Coupons

One thing that will make your food decisions easier is that you won’t have to calculate how many tickets you need or stand in line for more if you run out.

That’s right, your food festival dreams have come true: Cash and credit are both good for purchases at the food booths. No more food and drink coupons.

If you happen to have leftover ‘Tasty Bucks' from a previous year’s Taste Addison (even if it was 10 years ago), they never expired, so bring ‘em on down. But if you don’t have any, you don’t need any. That is SO worth celebrating. 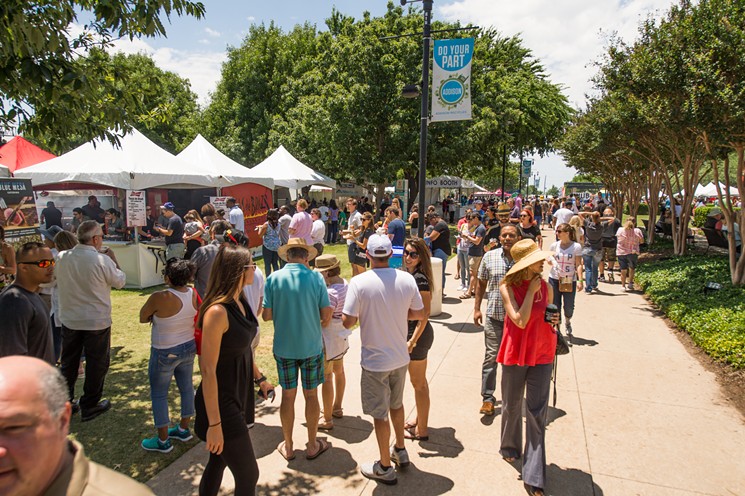 Tickets are selling out pretty quickly to this year's event.
Taste Addison

Don’t skip this part if COVID talk and mask talk makes you roll your eyes. There’s so much more than just a mask policy on a website. (“Face coverings are strongly recommended to be worn by all attendees that have not been fully vaccinated for COVID-19.”)

Yes, social distancing has been taken into account, making it easier to feel less crowded as you experience the festival. The best of these safety measures will also up the convenience level. One example of this is that you can use QR codes at the festival to order and pay for your food online. That means no standing in line at all, just place your order and pick it up.

The new Cupcake Wine Garden brings some safety measures by offering a big screen where you can watch a livestream of the main stage. That means you don’t have to crowd in toward the stage on the lawn.

But the wine garden is more than just a place for a giant livestream screen. For the first time ever at Taste Addison, there will be free wine tasting, courtesy of Cupcake Vineyards. Adults 21 and over can sample prosecco and cabernet sauvignon or try the lower calorie Cupcake Lighthearted rosé or sauvignon blanc.

Seriously, not sure what more you could ask for from a food festival or how we could be any happier that events and festivals are back. Grab your tickets now and have a great time at Taste Addison.

Taste Addison at Addison Circle Park, 4970 Addison Circle, Friday, June 4, 6 p.m. to midnight and Saturday, June 5, 2 p.m to midnight.
KEEP THE DALLAS OBSERVER FREE... Since we started the Dallas Observer, it has been defined as the free, independent voice of Dallas, and we'd like to keep it that way. With local media under siege, it's more important than ever for us to rally support behind funding our local journalism. You can help by participating in our "I Support" program, allowing us to keep offering readers access to our incisive coverage of local news, food and culture with no paywalls.
Make a one-time donation today for as little as $1.