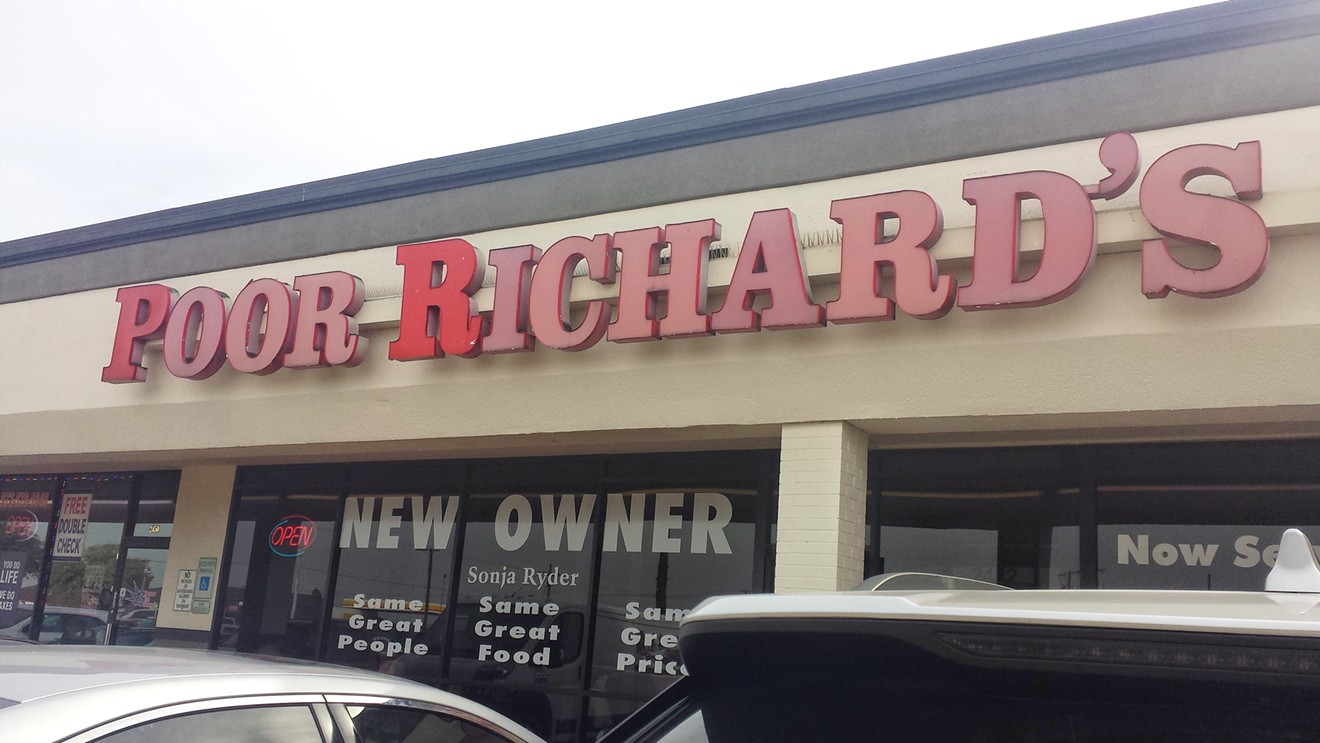 Several signs in front of Poor Richard's Cafe in Plano prominently tout that the cafe has a new owner. Alex Cronin
Under new ownership, Poor Richard’s Café is getting over Richard Butterly.

On a Saturday morning at Poor Richard’s Café in Plano, it’s business as usual. In the more than 30 years this local institution has been serving breakfast and lunch, very little has changed — except its ownership. In fact, the huge lettering on the windows outside prominently declares that there’s a new owner, Sonja Ryder. That’s about as far as the people of Poor Richard’s Café want to go to acknowledge the scandal that Butterly, the previous owner, brought down on their house.

Poor Richard’s is a diner stripped down to the factory settings. It serves the brass tacks of bacon and eggs without twists, tricks or foodie fusion. The coffee, while not great, is serviceable with the aid of the creamer packets that are dumped on the table. The Southern breakfast comes with slightly limp hash browns, fried eggs that are a perfect medium and pleasantly buttery, sturdy biscuits. The eggs Benedict is pretty good; the migas are popular for a reason. It all verges on grungy, but in a comforting, authentic manner.

Most of the waitresses, in their weathered “I grew up at Poor Richard’s” shirts, have been there upward of 10 years. The same goes for the customers; in fact, often the only people in the place who have been patrons for less than a decade are children. And there are a lot of children here. A 6-year-old with her grandparents at a table by the window has her Minnie Mouse doll with her. Those who love this place have loved it for a long time with staunch, familial loyalty. 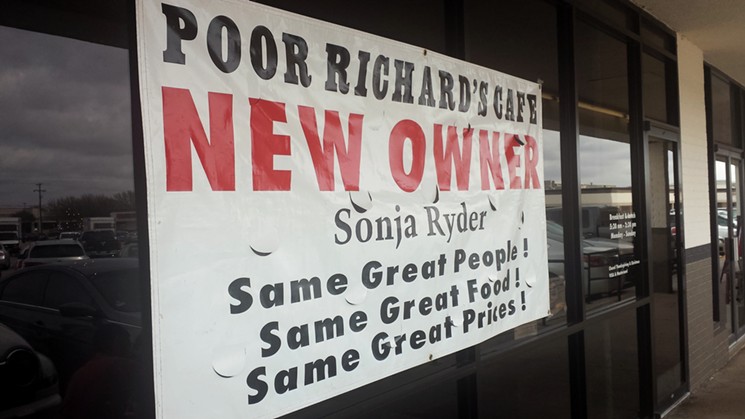 “If he had stayed, we all would have jumped ship," Poor Richard's new owner, Sonja Ryder, says of Richard Butterly.
Alex Cronin
Butterly was a fixture in the community and the face of the restaurant. In 2008, the Plano Chamber of Commerce named him Small Business Person of the Year. He frequently made the news by for toy drives and delivering meals to local organizations such as the Boys and Girls Club, City House and Samaritan Inn.

A week after his arrest, Butterly kept working at Poor Richard’s. People were naturally disturbed.

A year has passed. The restaurant changed hands. And now, things are back to normal.

All the references to Butterly stay outside, on the huge signs celebrating Sonja Ryder’s new ownership. Inside, no one talks about him, save for a few customers here and there. They stop Ryder as she buses tables to thank her for saving their favorite breakfast spot. Poor Richard’s Café still gives back to the community, and it serves a big crowd every morning.

“May 15,” Ryder says, pausing during St. Patrick’s Day breakfast. She wears a new Poor Richard’s shirt of her design, with a big coffee cup on the front. “It was my birthday. Pretty crappy birthday. It sucked. Let me just say that.”

Six months ago, after a long, hush-hush process in which lawyers were involved and her family pooled money, Ryder bought Poor Richard’s Café. She’d started at Poor Richard’s as a hostess when she was a teenager, and like most of the staff, she was disturbed by the allegations against Butterly. They all worried that they’d go down on his ship.

Ryder says she bought the place because she loved it. It was the only way she knew to assure that nothing would change, everyone would keep their jobs — except, of course, Poor Richard — and the restaurant would stay afloat.

“Everyone was shocked,” she says. “We were all going back through our memories of all these years here, looking back for signs we had missed. I couldn’t remember him being weird with the customers. I asked [Richard] once if it was true, and he said [the authorities] had made a mistake. I never asked again.”

She didn't want to speculate further.

After Butterly’s arrest became public, Ryder says, Poor Richard’s business dropped by 35 percent to 40 percent. In the year since, business has slowly climbed back, making nearly a full recovery.

“This is my family,” Ryder says. “We really didn’t know [about Butterly].”

According to Collin County court records, Butterly was charged May 9, 2017, with 10 counts of possession of child pornography. Several court dates have been reset, and the case is still pending.

So where is Butterly now? Ryder says she isn’t sure. The conditions of her ownership, she says, stipulate that Butterly has no further affiliation with the restaurant. Poor Richard's eggs Benedict, same as it ever was.
Alex Cronin
One Observer reader wrote in last week, claiming Butterly had recently served them at the restaurant. Ryder says that’s impossible. She suggests the person might have seen longtime restaurant general manager James Wells. It would jeopardize the whole restaurant if Butterly set foot inside.

“If he had stayed, we all would have jumped ship,” Ryder says.

Today, Ryder’s main concern is moving forward, out of the cloud cast over the restaurant’s reputation. No new details on his case have surfaced. Ryder says she once thought about changing the name of the restaurant, but she decided against it.

“We’re on lists of the best diners to visit in Texas. Changing it would have meant starting over completely," she says. “People know the name Poor Richard’s Cafe.”

KEEP THE DALLAS OBSERVER FREE... Since we started the Dallas Observer, it has been defined as the free, independent voice of Dallas, and we'd like to keep it that way. With local media under siege, it's more important than ever for us to rally support behind funding our local journalism. You can help by participating in our "I Support" program, allowing us to keep offering readers access to our incisive coverage of local news, food and culture with no paywalls.
Make a one-time donation today for as little as $1.
Alex Cronin
Contact: Alex Cronin