The Best Breakfast Sandwiches of 2020

The mega-egg sandwich from AllGood Cafe at Exall Park Taylor Adams
While breakfast may allegedly be the most important meal of the day and a favorite one for this writer, 2020 had fewer visits out for the meal than we intended.

Upon putting together this list, that became obviously true, and we missed spending weekends finding new places actually cooking eggs properly. And, again, it sucks to put a list about breakfast together when you can’t include Crossroads Diner.

This list was originally a best breakfast list, including excellent chilaquiles verdes from El Pueblo and breakfast tacos from Tia Dora’s. But the list became dominated with sandwiches, which proved to be good takeout foods that fueled us for most of 2020.

AllGood Cafe
While breakfast at AllGood previously involved plenty of pepper bacon and pancakes, a visit in May for takeout made us opt for this giant, club-like breakfast sandwich that won our hearts ($7.99). Freshly sliced, salty ham gets paired with a fried egg, cheese, tomato, avocado and Tabasco mayo on sourdough (from Empire Baking Co.). “Seems like a simple sandwich but we are picky about everything we do and put on the plate,” owner Mike Snider says.

Sausage and Egg or Any Other Breakfast Sandwich

La Casita Bakeshop
While admitting to Sandwich Expert Nick Rallo that my breakfast list turned into a breakfast sandwich list, he recommended La Casita land on here. With his title (which is not an official Observer one, just one this editor keeps throwing on his name) it seems worthwhile. “There are a lot of excellent cruffins on their menu, but they are really, really good at stuffing meats into rolls. They had a pastrami croissant. Every now and then they’ll have a sausage biscuit with poblano gravy.” Yeah, I’m in.

Goodfriend Package
Sure, get any biscuit sandwich at Goodfriend, but go all out and try the Ol’ Dirty ($7.50). It’s a lot — embarrassingly so if someone happens to see you eating it, but it’s worth it. A biscuit has egg, sausage, plenty of American cheese and nearly too-much gravy (but it’s not, promise) for a hearty meal that should hold you until dinner. 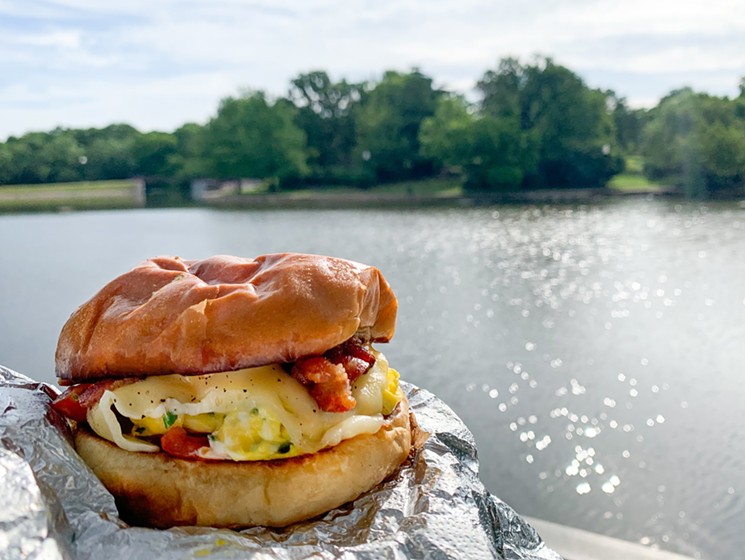 Whisk Crêpes Café
It was a wonderful thing when the decadent-looking breakfast sandwiches at Whisk’s Plano location made their way south over the summer. All of them are fantastic, sitting on a perfect brioche. Try the 7 o’clock with bacon, soft scrambled eggs, Swiss cheese, tomatoes, chives and Sriracha mayo ($6). 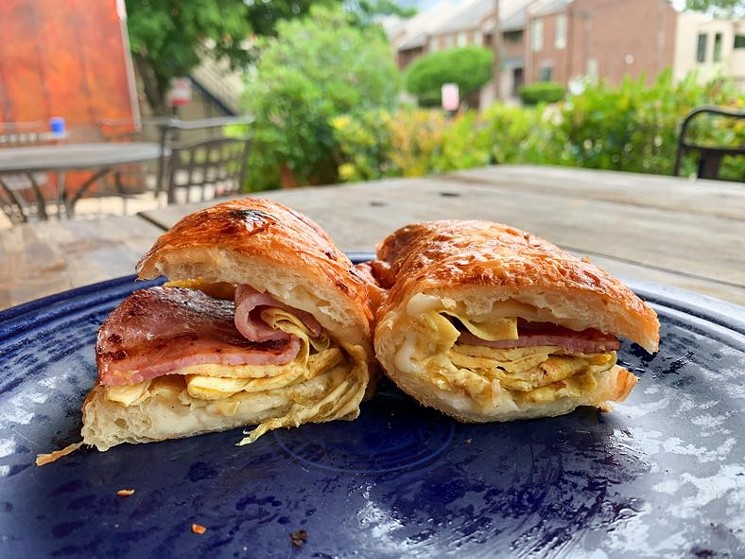 The ham, egg and cheese croissant from Zaguan
Taylor Adams

Zaguán Latin Cafe & Bakery
Zaguán will become a spot you frequent occasionally, assuming it’s geographically convenient enough. That could be for fresh fruit smoothies, wonderfully crisp and cheesy arepas. But definitely get the egg, ham and cheese croissant ($7.99). This place knows how to bake, and you’ll get a delightful croissant with plenty of cheese complementing a salty ham. We like the egg mostly for protein, you could 86 it and still be happy.

It would be great to have more places on this list — the pandemic prevented that, though. It did, however, allow more cooking to happen, and this writer became rather skilled at making two things: a margarita and a breakfast sandwich (never consumed at the same time). You can go local for it all, too, from the eggs (Bonton Farms) to the butter (Lucky Layla) to the bacon (Rudolph’s Meat Market) and so on. Make good use of your griddle and find the best version for your own self.

Have a favorite breakfast you think we should check out? Let us know — we always welcome tips.
KEEP THE DALLAS OBSERVER FREE... Since we started the Dallas Observer, it has been defined as the free, independent voice of Dallas, and we'd like to keep it that way. With local media under siege, it's more important than ever for us to rally support behind funding our local journalism. You can help by participating in our "I Support" program, allowing us to keep offering readers access to our incisive coverage of local news, food and culture with no paywalls.
Make a one-time donation today for as little as $1.