East Dallas’ Khao Noodle Shop Is the No. 2 Best New Restaurant in America, According to Bon Appétit Turns out, it’s one of America’s best new restaurants. 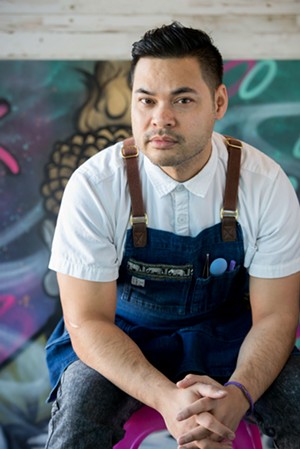 “I’m in disbelief and amazed,” he says. “I’m just pumped for the Khao family and what they’re representing for what Khao is, especially for us being in East Dallas. I was wishing Petra would be on there, too. ... But oh my God, just, I’m happy, I’m happy about it, I really wish my mom could be here.”

"After one slurp of painstakingly handmade noodles in a savory, complex pork blood broth, the restaurant’s roots came through clearly: This is the cooking of Laos, the country the chef’s mother fled after its civil war before resettling in Texas in 1977," writes Julia Kramer and Amiel Stanek of BA. "Now, in a strip mall in East Dallas — an area once home to many Southeast Asian refugees in the late ’70s and early ’80s — Sirisavath serves a menu inspired not by books or classes or other restaurants but by his own singular vision, rooted in family and place. This is a rare thing to find, and I felt lucky just to be there."

And plenty in Dallas are probably feeling lucky to live here.

Sirisavath can be found in that kitchen working every shift; before BA named Khao and Petra and the Beast as finalists in the top 50 last week, his small restaurant was regularly packed. This past week, they’ve had a line out the door and they’ve run out of food. Now, Sirisavath is readying for the business that's sure to show up today and onward.

“For us with Bon Appétit, we were more just happy that we got any kind of notoriety,” he says. “I’m not going to see anyone for a year.”

Khao follows No. 1 restaurant Konbi in Los Angeles, the Japanese sandwich shop gaining popularity, especially for its egg salad sandwich. (BA has a good podcast on this spot, by the way.)

Dallas was named Restaurant City of the Year by the magazine last week. Today, we celebrate another major win for a small East Dallas restaurant serving unforgettable noodles.

Dallas, let’s take another bow.
KEEP THE DALLAS OBSERVER FREE... Since we started the Dallas Observer, it has been defined as the free, independent voice of Dallas, and we'd like to keep it that way. With local media under siege, it's more important than ever for us to rally support behind funding our local journalism. You can help by participating in our "I Support" program, allowing us to keep offering readers access to our incisive coverage of local news, food and culture with no paywalls.
Make a one-time donation today for as little as $1.