Trompo al pastor at Chilangos. courtesy of Chilangos
A good taco will take you places.

Jon Garay and Joel Mendoza had dreams of bringing the street food they grew up on in their native Mexico City to Dallas, but both did it the wrong way the first time around. However, this was one of those good mistakes.

Garay thought he'd start with a food trailer (not to be confused with a truck) but quickly learned the city of Dallas doesn’t allow food trailers, so he put it up for sale. Mendoza, who has worked in high-profile kitchens in both Mexico City and Dallas, called Garay to inquire about it to start his own taco venture. When they realized they were both working toward the same concept, they became business partners, and the trailer was sold to someone else.

Garay and Mendoza started with a food truck, La Botana. After a year establishing business and learning about the local market, they opened a brick-and-mortar spot, Chilangos, on Harry Hines Boulevard. Their signature las costras taco is worth traversing the city or state for — cheese is placed directly on the grill, and the result is an ooey-gooey taco shell that is one thin line short of a scandal. 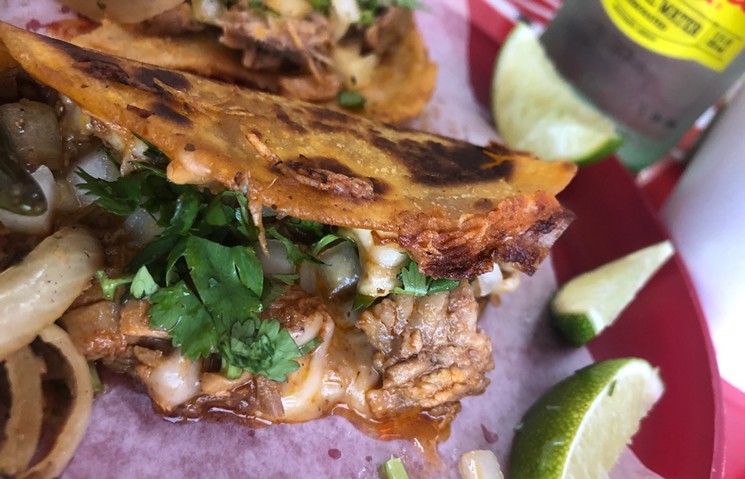 The cheesy las costras taco at Chilangos.
Lauren Drewes Daniels
Chilangos was one of the earlier places to serve the now trending birria, for which Mendoza uses his grandmother's recipe. They also make all their tortillas in-house. During the week, patrons include workers with dusty boots and neon safety jackets and people snapping photos for their Instagram feeds.

“The whole concept was born out of necessity,” Garay says. “I’m from Mexico City and couldn’t find tacos like I enjoyed back home anywhere in Dallas. With Chilangos, my goal was to go back to the basics and take a look at what makes a good taco. It all comes down to a good tortilla, great protein, amazing salsa and simple toppings, and that’s exactly what we focus on at Chilangos.”

This Tuesday, Nov. 24, the duo is expanding to Legacy Hall in Plano, a three-story food hall that's home to more than 20 restaurants, a brewery and a large outdoor courtyard.

The menu at Chilangos is simple: tacos, quesadillas and elotes or chips and salsa for sides. Protein options are carne asada, pastor, pollo, barbacoa or hongos (carmelized mushrooms). Tacos and quesadillas are served in traditional Mexico City style with onions, cilantro and your choice of salsa.

“Since opening our Harry Hines location, we’ve seen taco enthusiasts from Oklahoma, Celina and beyond driving to try our tacos,” Garay says. “When the opportunity to open at Legacy Hall came to the table, it felt like the perfect match. Geographically it targets the growth that we were planning for the next five years, and we feel we can fulfill a need for Mexico City-style tacos in the area.”

Legacy Hall is open for dine-in, carry out and delivery.

Chilangos, 7800 Windrose Ave., Plano. Open 9 a.m. to 11 p.m. Monday through Wednesday; 9 a.m. to midnight Thursday; 9 a.m. to 2 a.m. Friday and Saturday; and 9 a.m. to 11 p.m. Sunday.
KEEP THE DALLAS OBSERVER FREE... Since we started the Dallas Observer, it has been defined as the free, independent voice of Dallas, and we'd like to keep it that way. With local media under siege, it's more important than ever for us to rally support behind funding our local journalism. You can help by participating in our "I Support" program, allowing us to keep offering readers access to our incisive coverage of local news, food and culture with no paywalls.
Make a one-time donation today for as little as $1.