It's a safe bet that Todd David and Cattleack Barbecue stays on Texas Monthly's Top 50 Barbecue list. But who stays and who goes? Chris Wolfgang
(Update Sept. 3, 8:30 a.m.: We errantly reported that the Texas Monthly Top 50 BBQ List will be released on Sept. 17. Actually, it won't be out until mid-October. Our handicapping stands.)

Four years seems like such a natural number between major events. In normal times, it’s how often we elect a president, how often the Olympics pop up in a new host city and how often we have a leap year. Perhaps most important in Texas, it’s how often Texas Monthly publishes its Top 50 Barbecue Restaurants list.

It feels almost like yesterday when we hailed the 2017 list for recognizing 10 Dallas-Fort Worth spots among the state’s best, with Cattleack Barbecue anointed as the third best spot anywhere between the Red River and the Rio Grande. On the other hand, the global pandemic has a way of making time stand still. The pandemic and the restrictions that came with it were tough on the restaurant industry, and barbecue restaurants weren’t immune to feeling its impact. While not all of the closures were directly related to pressures of the coronavirus, a stunning six of the Top 50 restaurants have closed their doors since 2017.

Two of the casualties were in the Dallas area. In 2019, Flores Barbecue moved up from Whitney to a spot in Fort Worth, only for owner Michael Wyont to shutter his business and move away from the big city just a few months later. And earlier that year, Top 5 BBQ was forced to close its doors even after we named them our 2018 pick for Best Barbecue in our annual Best Of Dallas edition.


Despite the pandemic and the closures, there’s never been a better time to be a barbecue fan living in North Texas. All it takes to reaffirm this notion is the number of new and highly praised barbecue establishments that have opened up since the last Top 50 list. By no means an exhaustive list of what's new, it still reads like a who’s-who of popular barbecue: Tender Smokehouse in Celina and Frisco (and a third spot in the works), Smoke Sessions in Royce City, Zavala’s in Grand Prairie, Terry Black’s, D Jackson’s and OAK’d in Dallas, 225 BBQ and Hurtado’s in Arlington (with a second Hurtado’s location coming to Little Elm), Panther City, Dayne’s Craft Barbecue, Derek Allan’s or Brix Barbecue in Fort Worth. 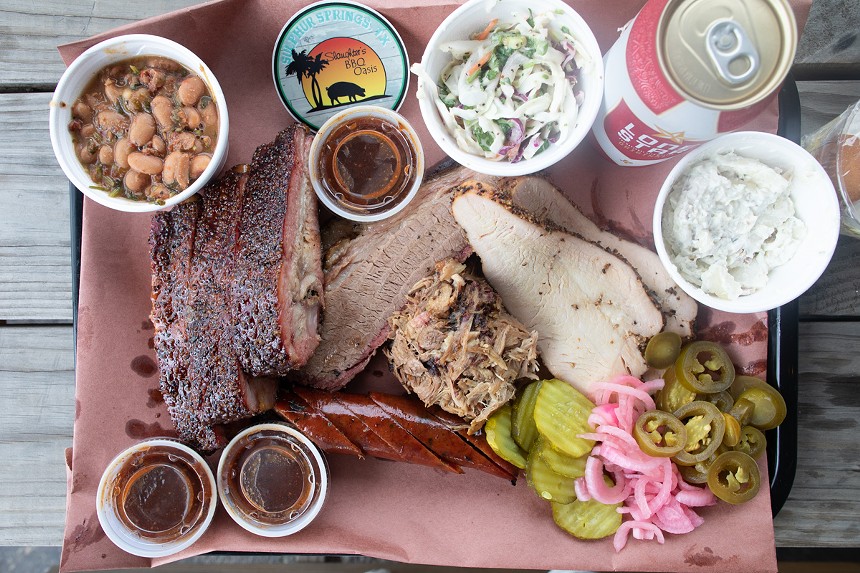 Will a new joint like Slaughter's BBQ Oasis in Sulphur Springs crack Texas Monthly's Top 50 Barbecue list?
Chris Wolfgang
And that list doesn’t even cover every spot that has opened in the area. The highways and byways of Texas lead to a plethora of good barbecue just outside of the city. We spent a summer road-tripping to some of these spots, and we wouldn’t be a bit surprised to see a place like Sunbird BBQ in Longview, Slaughter’s BBQ Oasis in Sulphur Springs or Helberg Barbecue outside of Waco get some Texas Monthly love.

The Top 50 list comes out in October and until then, we can only speculate (along with the rest of social media) on who makes the cut. But inciting people’s opinions is part of the job, so we’re going to make some bold and not-so-bold predictions about some of our North Texas spots we think will be recognized.

Prediction 1: Smokey Joe’s makes the cut
Smokey Joe’s may be the best barbecue you’re not eating. Kris Manning’s dad opened Smokey Joe’s over 30 years ago, but Manning’s curiosity about barbecue sent him across Texas to learn its secrets, which he now applies with aplomb at Smokey Joe’s. You heard it from us first — get thee to this south Dallas gem before the rest of Texas learns of its greatness. (6407 S. R. L. Thornton Freeway, Dallas)

Prediction 2: Cattleack Barbecue is still a Top 10 Destination
Think of this as our gimme. For two days a week and one Saturday a month, the barbecue faithful line up to chow down on what Todd David cranks out of his modest restaurant tucked in an industrial park. Cattleack's limited availability certainly drives the appeal, but the appeal wouldn’t last if the barbecue wasn’t so sublime. (13628 Gamma Road, Farmers Branch)

We like a lot of things at Hurtado, and these brisket huevos rancheros are at the top of the list.
Sean Welch
Prediction 3: Hurtado Puts Mexicue On The Map
Honestly, this pick could go a number of ways. A couple of blocks away from Hurtado, 225 Barbecue pumps out barbecue gems and an always-changing menu from a spot next to Division Brewing. And down the road in Grand Prairie, Zavala’s Barbecue has churned out brisket, tortillas and chimichurri since 2018 (and runs a hella great coffee shop during the week). But Hurtado Barbecue has become synonymous with “Mexicue”, the blend of barbecue, tacos, elotes and the like that Brandon Hurtado attributes to his dad’s Mexican roots. Barbecue with a Hispanic influence is a theme we’re seeing at spots not only in Dallas-Fort Worth, but across the state as well, and our guess is more spots like Hurtado will be recognized in the next Top 50. (205 E. Front St., Arlington)

Prediction 4: Let's Bet on The Over
In his 2017 list, Texas Monthly's barbecue editor Daniel Vaughn astutely noted that barbecue was becoming more of an urban institution. Towns like Lockhart, Lexington and Luling will still hold barbecue gems, but we think the trend continues with great barbecue calling the metropolitan areas home. Dallas-Fort Worth picked up 10 of the 50 spots in 2017, and we think that number goes up in 2021. Barbecue's growth hasn't been limited to just Dallas, but in our humble opinion, we've got too many great choices to not crack the double digits.
KEEP THE DALLAS OBSERVER FREE... Since we started the Dallas Observer, it has been defined as the free, independent voice of Dallas, and we'd like to keep it that way. With local media under siege, it's more important than ever for us to rally support behind funding our local journalism. You can help by participating in our "I Support" program, allowing us to keep offering readers access to our incisive coverage of local news, food and culture with no paywalls.
Make a one-time donation today for as little as $1.