How a Dallas Couple Brought a Renowned French Bakery from St. Tropez to Dallas 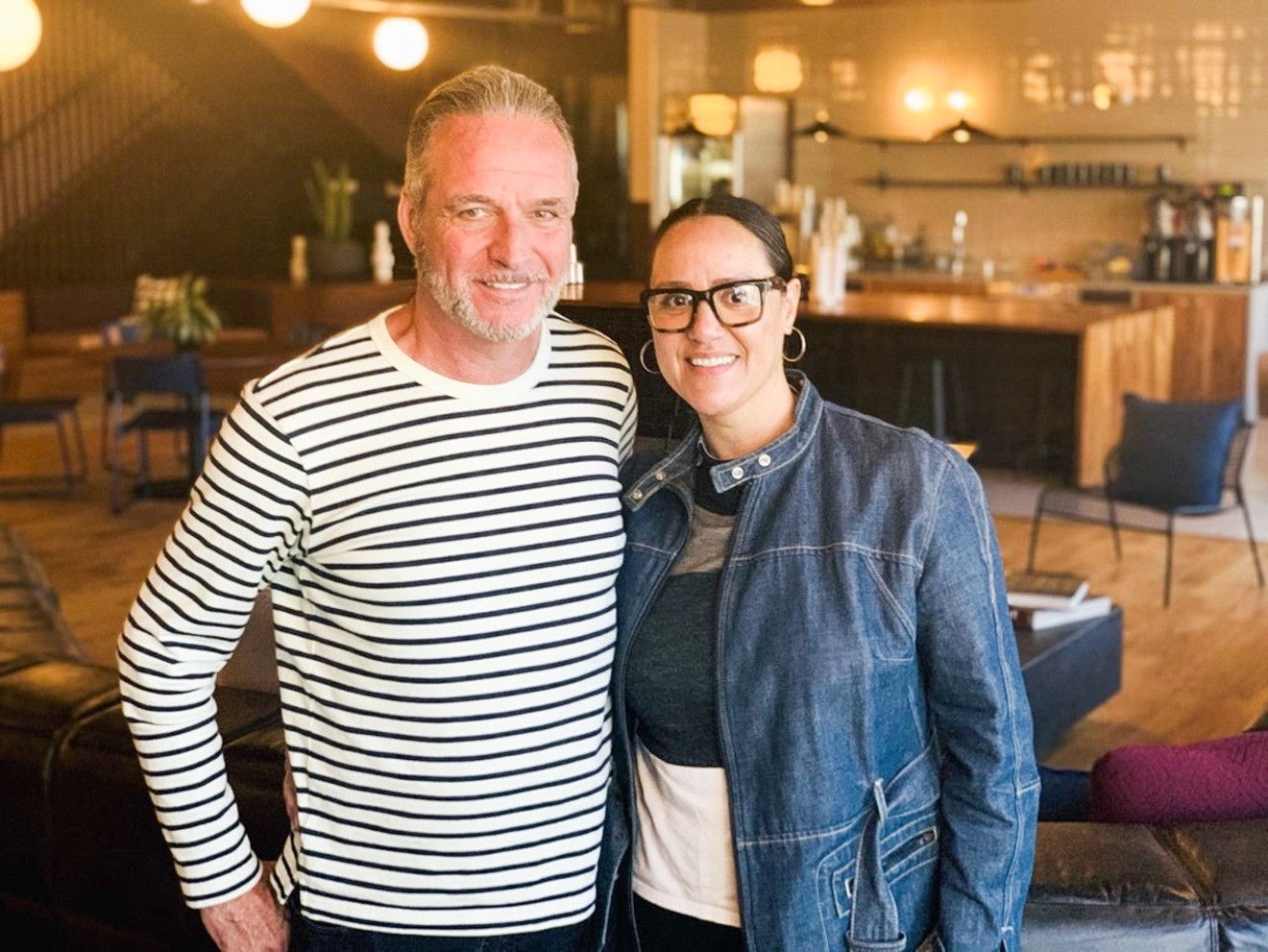 Jan Marien and Rebecca Velázquez of La Tarte Tropézienne USA Lauren Drewes Daniels
A fancy French patisserie out of St. Tropez, France, will soon be peddling its exclusive pastries in our fair city.

Adjacent to The Joule Hotel in downtown Dallas, this will be the first location for La Tarte Tropézienne outside of France, with a planned opening date in late February. (They’re waiting on permits to finish construction.)

Curious, I did a little research to learn more about the history of the bakery and found an interesting background, begging even more questions.

The story starts in 1955 when Alexandre Micka, a Polish immigrant, settled in St. Tropez and opened a small bakery. Based in part on his grandmother’s recipes, he made cream pies with a brioche-style dough and a light cream filling.

That same year, Brigitte Bardot was cast as the lead actress in And God Created Woman, which was filmed in St. Tropez. Bardot found Micka’s little bakery and fell in love with the small cream pies and suggested he call it “la tarte tropézienne.” She became a sort of unofficial ambassador of the bakery, a social influencer of the 1950s, if you will.

Over the years, the bakery’s popularity and business have steadily grown, but it wasn’t until 2012 that the business expanded, opening boutiques in Toulon and Aix-en-Provence, then Paris in 2013 and smaller pop-ups in airports.

But never outside of France.

And the recipe? It hasn’t gone anywhere. Chefs have often tried to duplicate the delicacy, but Micka got a patent in 1973, and it has been a closely guarded secret since.

According to their website, in 1985 Micka passed the recipe on to his business partner and current owner, Albert Dufrêne. The handwritten recipe, scribbled on a cardboard pie shell, has remained under lock and key. No more than three people are privy to the details. 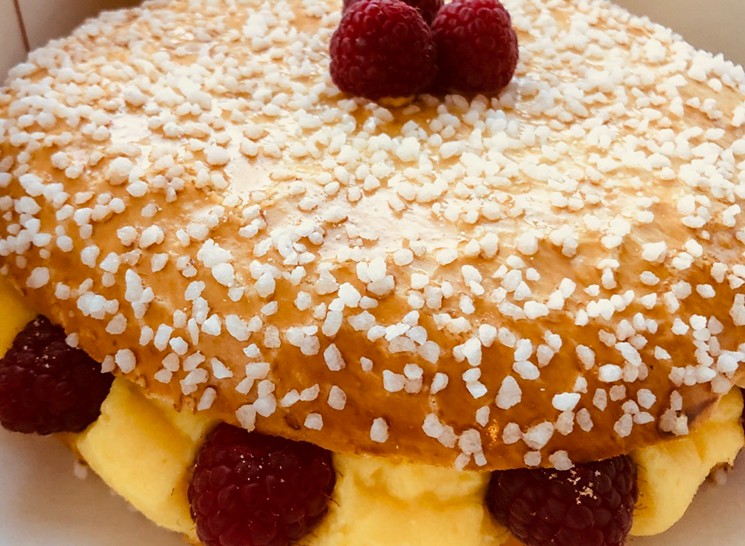 La Tarte Tropézienne
Lauren Drewes Daniels
So now we’ll meet Jan Marien and Rebecca Velázquez, the couple responsible for bringing this renowned bakery to Dallas. Here’s just how they pulled it off.

DO: How did you get into the international baking business?
Jan: “I’ve been in the bakery business for 20 years, mainly in viennoiseries, croissants and stuff. I used to represent manufacturers in Europe and bring them to the U.S., but we’d sell the product into a resell.”

How did you specifically land La Tarte Tropézienne?
Jan: “We [he and Rebecca] had been thinking about doing something in food service. We were going to start our own Italian bakery with focaccia bread and stuff. Then, a friend of mine told me he had some friends out in France, and they have a great product. They have about 30 stores in France and are doing a great job there, but they don’t export. So, we talked and partnered with them.”

Rebecca: “It was a good fit. The owner of Le Tarte Tropézienne is Albert Dufrêne, and his dream was always to have a store in the United States, so it just sort of all fell into place.”

How did you find a home in The Joule?
Jan: “We took over a year to find the right spot. We looked at a lot of different areas and locations, but it had to be the right place. We passed on quite a few locations before we decided on this one.”

Rebecca: “It was almost God-sent. It’s a small location, but we couldn’t let it go. We get calls periodically from people, calling wanting to know when it’s going to open. And it’s sad because at first we were wanting to open in November, then December. Now it’s January, but we’re waiting on permits.”

How close are you to opening?
Jan: “We just need a couple of more signatures from the city. We have the contractors in place, and we have to check their availability, but if they’re all available and it lines up nicely, we can be done in four weeks. So best-case scenario, we can open by Valentine’s Day, but it will probably be closer to the end of February.”

Do you have a copy of the highly guarded recipe?
Jan: “No. They make the brioche dough pre-proved in France. They then blast freeze it and send it over here. They do the same with the cream.

“So, what we do is pull out dough pieces from the freezer, we allow it to thaw out to room temperature, we egg wash it and put pearl sugar on the top. We then bake them in the oven, let them cool off, slice them, pipe the cream in and assemble the product.”

Rebecca: “It really is technically French because it’s made over there. All French ingredients.”

I thought I heard a baker from France might come over. Is that right?
Jan: “A week before opening and the first week we’re open, a chef will come over here to monitor everything and train the team, but Rebecca is the baker right now.”

Rebecca: “Until further notice [laughs]. It is new for me because I came from a TV production background. I used to work for The Oprah Winfrey Show and he got me into baking.”

Did you receive any formal training on the baking process from La Tarte Tropézienne?
Rebecca: “Yes, I went to their lab, or test kitchen, and trained 10 hours a day. It was an intense seven days. They all watched me very closely. They had the actual ovens in the test kitchen that we’re going to be working with here. They’ve selected everything, even down to the ovens. So we’ll bake them at our commissary and then bring them over and assemble them at the store.”

Jan: “We’ll bake at 5 in the morning, then bring everything over, and the store opens at 8. That’s not necessarily going to be our business model across the board. It was just with this, because it’s such a small store, we had to put the kitchen somewhere else. Our goal is to eventually be able to bake, assemble and sell at the same store.”

In addition to the famed tarte tropézienne, the cafe will also have a wine and bubbles bar with caviar, as well as breakfast and lunch offerings from Bright Box Foods and happy hour events. And be sure to look for a mosaic of the bombshell that helped start it all — Brigitte Bardot.

La Tarte Tropézienne, 1604 Main St., Suite 110 (downtown). Planned to open in February.
KEEP THE DALLAS OBSERVER FREE... Since we started the Dallas Observer, it has been defined as the free, independent voice of Dallas, and we'd like to keep it that way. With local media under siege, it's more important than ever for us to rally support behind funding our local journalism. You can help by participating in our "I Support" program, allowing us to keep offering readers access to our incisive coverage of local news, food and culture with no paywalls.
Make a one-time donation today for as little as $1.