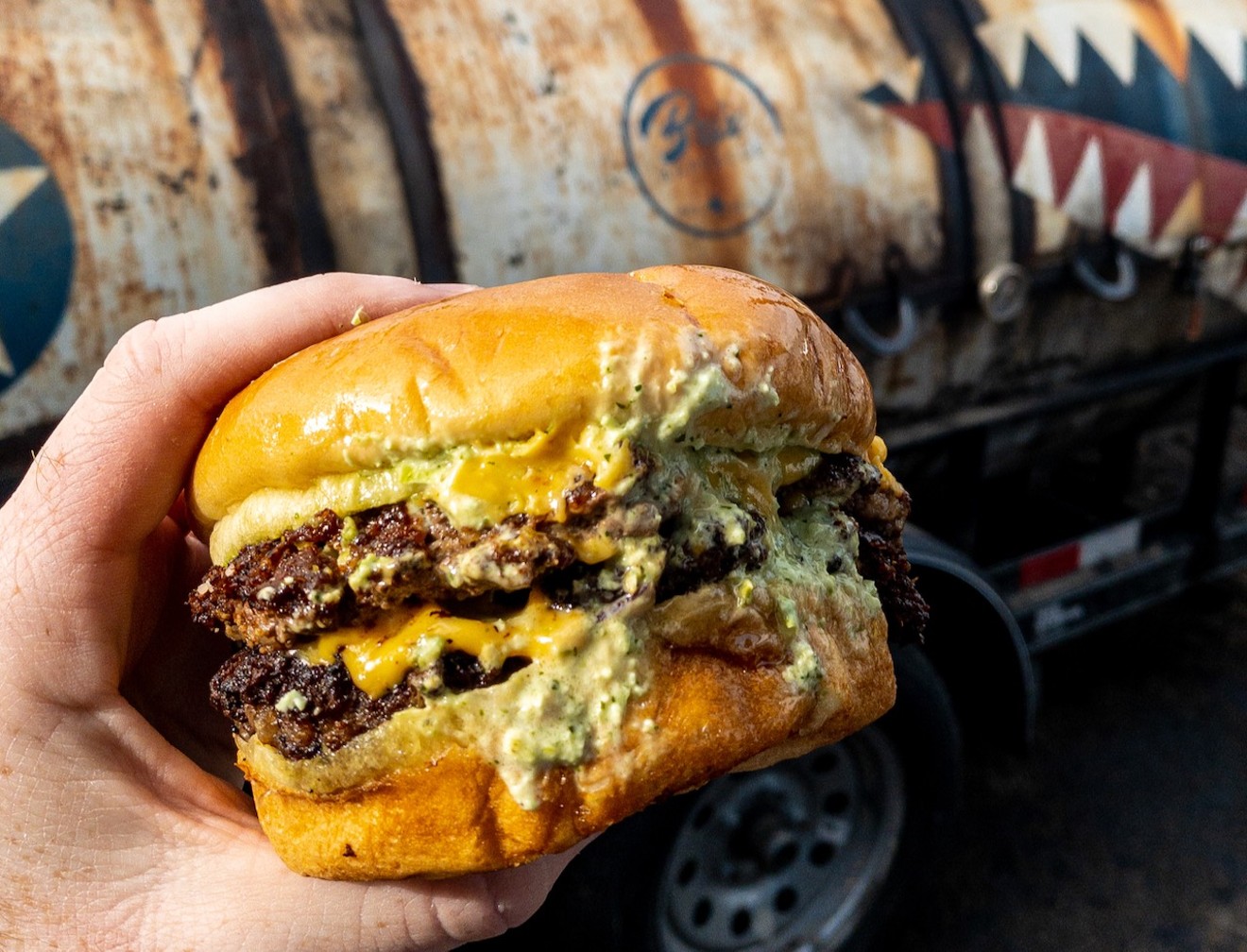 This is from a special after-dark menu, which is only served on Sunday night starting at 6 p.m. Sean Welch
Have you ever seen the before and after of a brisket trimming? If you haven’t, you would be amazed by the transformative makeover a brisket receives from the knife of a skilled pitmaster. During this makeover, the brisket sheds pounds of quality meat that could either go to waste or be put to good use. At a time when beef prices are high, some pitmasters, like Dayne Weaver, owner of Dayne’s Craft Barbecue, have decided to utilize this excess quality meat to make one of America’s favorite meals: a burger.

Since many barbecue joints sell out of their prime meats and sides rather quickly during the day, folks worry they may stand in line for lengthy periods and still miss out on the deliciousness that place has to offer. Thankfully, a select few of these joints have decided to add burgers to their menus, giving people an extra option to choose from.

Some places offer them as an all-day, everyday item and others are choosing to showcase them on special burger nights. From smash burgers (a mix of coarsely chopped brisket and ground beef) to half-pound burgers to burgers topped with various aiolis and cheeses, the barbecue burger scene keeps growing with each passing week. Following are a few barbecue joints making some exceptional burgers.

Brix isn’t just an adorable boxer puppy roaming the streets of South Main in Fort Worth, he is also the namesake of one of the best new faces in Texas barbecue: Brix’s Barbecue. Our first dive into the new barbecue burger craze was at the notorious Brix After Dark. After multiple unsuccessful visits, we finally made it to the front of the line with a full menu still available. Voila!

The crispy edges and the light green aioli dripping from every side of the burger really gave us high hopes for all barbecue burgers in the future. Shortly after our first visit, Brix teamed up with Doughboy Donuts to make a special doughnut burger, one that we’re patiently waiting for them to repeat. This menu is definitely worth the wait after dark and it continues to expand. B.A.D. is traditionally Sunday nights starting at 6 p.m. until sold out!

Dayne's comes with a secret sauced developed by one of the pitmasters.
Sean Welch
We were at Dayne’s on a Friday when he looked through the window and asked if we wanted to try the Dayne’s Brisket Burger. Of course, we said, and eagerly added it to our already overwhelming tray of his barbecue.
Dayne said they wanted to keep the burger simple and let the meat shine. The brisket burger is two smash patties, white and yellow American cheese, vibrant fresh crispy purple onions and a secret sauce developed by Thomas Loven, one of the other pitmasters at Dayne’s.

The burger did exactly as Dayne had hoped: it spoke for itself. We found ourselves sneaking bite after bite on the drive home because we just could not put it down. Dayne and his team put an exceptional amount of time and passion into their work and the burger is just another display of that. Clearly, everyone else has been noticing as well because he’s been selling substantially more burgers than ever expected. That’s a great problem to have when they plan to rotate monthly specials while always serving the original burger pictured here.

You can get the brisket burger or their jalapeño Havarti burger, which pays homage to one of their special sausages, topped with jalapeño jelly. The burgers are available only on Fridays and Sundays alongside their full menu.

Zavala's serves their burgers on a plastic McDonald's plate because it tastes better that way.
Sean Welch
Joe Zavala and company seem to enjoy rotating the menu, having particular nights dedicated to special menus. We’ve been fortunate enough to sample most of these special menus, like the Crispitos and Cheese Night, as well as the Fajita Night.

We want to highlight their burger. The Zavala's crew, a group who do everything but take themselves too seriously, comically named this the “Drew’s Booter Burger” referring to pitmaster Drew Wright’s childhood nickname.

Like many of the other barbecue burgers across the area, it’s simple but full of flavor. Attempting to re-create Drew’s favorite burger, The Friendly, in San Diego they’ve brought us quite the tasty burger. Served on Martin’s Famous potato rolls as either a single or a double, a 44 Farms beef patty topped with gooey American cheese and beer-braised chopped white onions blanketed with Drew’s garlic aioli.

Originally they were using brisket trimmings like the others but when the demand got high (140 burgers a night) they ended up switching to 44 Farms ground beef to keep up.

While we may have not sampled all of them, there are a few other locations worth mentioning. Bare Barbecue in Cleburne, T & D Barbecue in Weatherford and SmoakTown Barbecue in Royse City all have burger specials as well.
KEEP THE DALLAS OBSERVER FREE... Since we started the Dallas Observer, it has been defined as the free, independent voice of Dallas, and we'd like to keep it that way. With local media under siege, it's more important than ever for us to rally support behind funding our local journalism. You can help by participating in our "I Support" program, allowing us to keep offering readers access to our incisive coverage of local news, food and culture with no paywalls.
Make a one-time donation today for as little as $1.