The Italian restaurant Olivella's in Deep Ellum is open as a more casual deli at lunch. Olivella's Italian Deli
Santa and his posse of hoofed aviators aren't the only ones busy this December. Restaurateurs around North Texas continue to create new spaces where we can expand our waistlines. There's been a spate of recent news on openings.

Here are some we're most excited about:

1499 Montfort Drive, Preston Place, Addison
The Asian smokehouse LORO is the love child of James Beard Award-winning chefs Tyson Cole of Uchi and Aaron Franklin of Franklin Barbecue. Slow-smoked nuggets of brisket mingle with Asian spices for a beautiful menagerie of flavors. A new LORO opened in Addison on Dec. 14. The original North Texas location in East Dallas is also a cozy space with a unique communal vibe, and we're excited about this expansion. Also, if you missed it previously we spoke to LORO's 5-foot-1 pitmaster Judith Covarrubias a while back.

4234 Oak Lawn Ave., The Shops at Highland Park
Coupes is a new French-inspired, Champagne-driven bar in the Oak Lawn area. This spot, founded by "Champagne enthusiasts" Eric Chiappinelli and Amanda Hale, recently opened with a vast selection of 15 "true Champagnes," sparkling wines by the glass and 50 more by the bottle. There are also still wines (no bubbles) sourced from France and Texas. Yes, Texas.

1404 N. Riverfront Blvd. (Design District)
This & That Hospitality (The Whippersnapper, Sfuzzi, Ferris Wheeler's, Tiny Victories) has a new bar called Double D's, a nod to its Design District neighborhood. What did you think it was a nod to? As with many of this group's concepts, this spot has a mischievous spirit. With an "all the love" tagline, Double D's is a cocktail lounge straight out of the '70s with "dope DJs" and "nice ass bartenders." Drinks range from shots to classics cocktails ($11 to $14). A pony Miller High Life is $3. And how great is it to see Coors Banquet on a menu ($5)? There is also a mocktail menu for $6. And a $7 happy hour runs from 5 p.m. to 8 p.m. Wednesday through Friday. We can all get behind a happy hour that runs until 8 p.m. 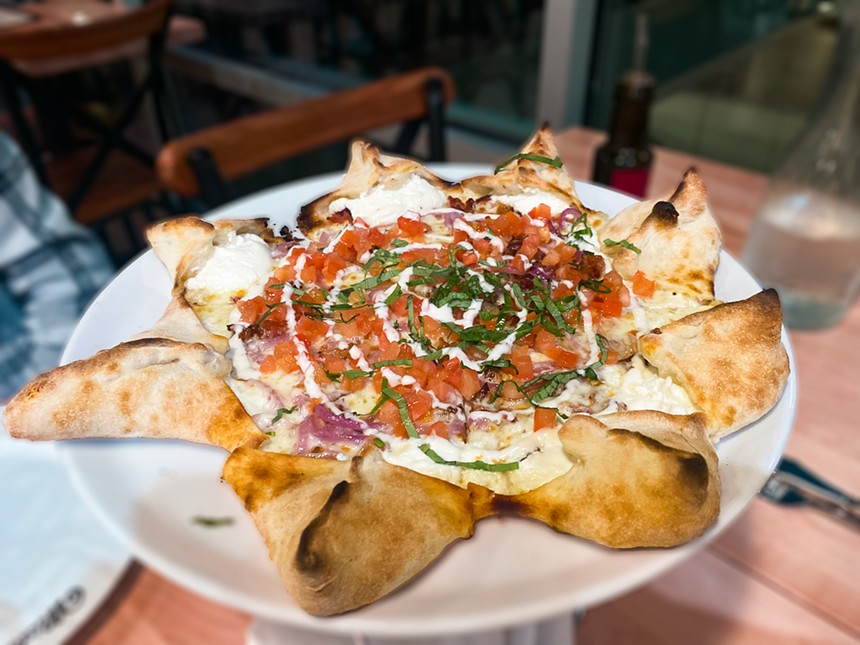 The star of the show at Mister O1 is the star-shaped pizza.
Lauren Drewes Daniels

4525 Beltline Road, Addison
OAK'D BBQ will open a second location this February in Addison. It's a bit of an elevated barbecue restaurant with wagyu briskets sourced from Rosewood Ranch and smoked with post oak. The sides and desserts are all made from scratch (a full-time pastry chef is on staff). This new 7,000-square-foot space will have two outdoor entertainment patios in addition to the restaurant.

6565 Hillcrest Ave., No. 150, Snider Plaza
After recently expanding from seafood (TJ's Seafood and Malibu Poke) to Tex-Mex (Escondido), John Alexis will open the Ramble Room in early spring 2023 at Snider Plaza. This two-story spot with a fireplace will serve classic American cuisine and will have a bar.

129 S. Main St., Grapevine
We recently wrote about Mister O1, a new Miami-based pizza concept that is expanding across the U.S. The big draw is star-shaped pizzas with the crust pinched into a "tent" that's stuffed with cheese. It's actually amazing and was one of our best bites of the year. Also here is warm, fragrant rosemary focaccia bread in a brown paper bag that is equaling amazing. A spot on Grapevine's Main Street is next up for Mister O1 pizza. It's expected to open in spring 2023.
KEEP THE DALLAS OBSERVER FREE... Since we started the Dallas Observer, it has been defined as the free, independent voice of Dallas, and we'd like to keep it that way. With local media under siege, it's more important than ever for us to rally support behind funding our local journalism. You can help by participating in our "I Support" program, allowing us to keep offering readers access to our incisive coverage of local news, food and culture with no paywalls.
Make a one-time donation today for as little as $1.