As Dallas Restaurants Take a Punch, Many Answer With an Embrace

The restaurant industry has certainly gotten rolled in the COVID-19 pandemic. According to the Texas Restaurant Association, more than 1.3 million Texans work at or for restaurants (normally). With the recent extension of the shelter-in-place rules through April 30 for Dallas County, no one would blame local workers, owners and operators of restaurants if they wanted to sit in a corner and cry.

Actually, many probably are.

And while all of us on the receiving end of their craft have called in orders to try to help them stay afloat, in some way at least, it’s still a struggle. Takeout just can’t replace a dining room serving 400 people (many of whom are drinking) on one busy Friday night.

But, an unpredictable aspect of this crisis is the number of restaurants helping others. The very ones who we’re trying to toss a life ring to are tossing their own to others.

For instance, over the weekend, La Casita Bakeshop, which just opened its doors for business this year and has worked seven days a week for the last three years to establish its wholesale business, sent boxes of fresh baked pastries to the medical staff at Baylor University Medical Center.

“We’ve been looking for a way to help out, and we have help from a physical therapist who is friends with other doctors and nurses,” owner Maricsa Trejo says. “So, we decided to send them some pastries and bread to help keep them going.” 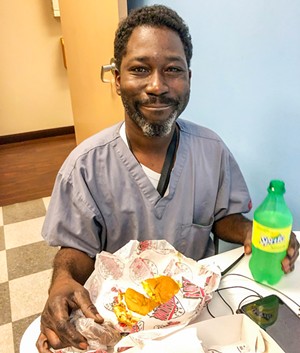 Ray Mills enjoying a break. He looks happy. And that makes us happy.
courtesy Norma's Cafe
Almost immediately after the shelter-in-place directive was issued, New York Subs cleared out their dining room to set up a meal kit assembly line to feed staff at hospitals, food pantries and homeless shelters. Sometimes local groups, such as Armstrong Elementary and Hyer Elementary, sponsor the meals, other times they just do it.

Owner Andrew Kelley says his production process was overseen by a physician, and he also had input from Parkland Hospital about how to make sure his process was clean and safe.

“We pack everything into my truck and make my deliveries to the hospitals,” Kelley says. “My employees work lunch and prep the lunch boxes for the next day so that I can just go and make the sandwiches and put them in the boxes. I also have a crew that comes at night and sanitizes the whole place.”

Norma’s Cafe, which opened in Oak Cliff back in 1956 and now has five restaurants across North Texas, worked with the Austin-based delivery company Favor to create an outlet for giving. Favor A Neighbor encourages people to send a slice of pie or a chicken-fried steak to a neighbor.

For a bigger impact, Norma's pulled out their Rolodex of local nonprofits to pair with customers who wanted to help on a larger scale.

“We get emails everyday, sometimes two or three, and as many as 10, from people asking how they can help,” says Katy Anderson with Norma’s Cafe.

A couple of weeks ago, HotBoyz Charities, led by Dallas Cowboys defensive end DeMarcus Lawrence, contacted Norma’s Cafe to sponsor meals for those in need. Others have made large anonymous donations allowing them to drop off 100 meals to the Wilkinson Center.

A huge upside is that these orders allow Norma’s to retain much of their kitchen staff.

Other do-gooders that have scrolled past our social media feeds include LA Burger, which took 100 meals to Parkland Hospital.

Last Friday, Sandwich Hag delivered meals to one of the city of Dallas testing centers and UT Southwestern Veterans Affairs.

Jasper’s Uptown chef Yia Medina posted that no service industry worker should go hungry and to contact them directly if they needed anything (they’ve since shuttered for the time being).

225 BBQ, which parks their barbecue truck in Balch Springs and Arlington, has offered a free meal to anyone who is out of work. They also have a pay-it-forward board for anyone who wants to buy a meal for someone else.

As we wrote about earlier, Salaryman in Oak Cliff created #ConnectingPeopleAndPlates to help furloughed service industry workers. Anyone can donate money to help provide meals, and any restaurant can join the cause.

Jose in North Dallas is providing breakfast tacos to Parkland on weekdays for the next seven weeks.

There are many who are making a difference right now. It’s inspiring when the ones who have taken a gut punch have reciprocated with an embrace.
KEEP THE DALLAS OBSERVER FREE... Since we started the Dallas Observer, it has been defined as the free, independent voice of Dallas, and we'd like to keep it that way. With local media under siege, it's more important than ever for us to rally support behind funding our local journalism. You can help by participating in our "I Support" program, allowing us to keep offering readers access to our incisive coverage of local news, food and culture with no paywalls.
Make a one-time donation today for as little as $1.