Courtesy of Wits Steakhouse, photo by Kathy Tran
Last year when Oak closed, it was the end of a pretty good 10-year run for the spot in the Design District. Many high-profile chefs had led the kitchen, notably Jason Maddy and Brian Zenner.

Now the owners of the space, Apheleia Restaurant Group (ARG) — PakPao, El Bolero and Hawthorn —have opened a new concept, Wits Steakhouse. According to a press release, it’s a modern steakhouse that is both traditional and creative and includes some South African-inspired dishes. Richard Ellman, the founder of ARG, was born in coastal South Africa and went back to his family roots for inspiration for this spot. “My parents were also born and raised in South Africa, so the history runs deep within my background,” Ellman says in a press release.

The name, Wits, is a reference to the University of Witwatersrand, which Ellmans’ mother attended and is in a region with a history of being home to some of the world's largest gold mines. The theme is carried out throughout the space (lots of gold-hued decor) and on the food and drink menus. 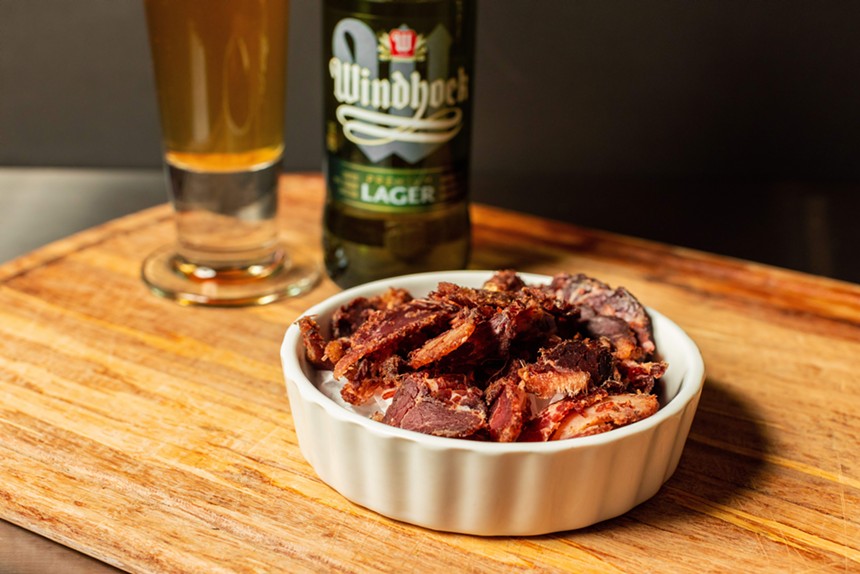 On the entrée menu, there’s a Prime New York Strip (14-ounce, $78) and tomahawk steak ($120) with house-made sauces including a cognac peppercorn, bearnaise or truffle butter. Peri peri prawns ($37) are served with roasted peppers, garlic and red onion. There’s a New Zealand lamb rack and a South African braai, which is grilled chicken with roasted peppers and sunchokes. A black truffle burger is served with truffle aioli and shaved truffle. There are also lobster dumplings, black cod and duck fat-fried chicken.

In addition to all of that, there’s a sushi menu. They’ll also have South African beers and wines by the glass and bottle.

There's no mention of who the chef is. We reached out, and if we hear back we'll update.

Update: The executive chef is Jeremy Lewis who was an executive sous chef at Whiskey Cake most recently, and a sous chef at True Food Kitchen and III Forks prior to that.

Wite Steakhouse, 1628 Oak Lawn Ave., #110. Open 5 - 10 p.m. Tuesday - Thursday, 5 - 11 p.m. Friday and Saturday. Closed Sunday and Monday.
KEEP THE DALLAS OBSERVER FREE... Since we started the Dallas Observer, it has been defined as the free, independent voice of Dallas, and we'd like to keep it that way. With local media under siege, it's more important than ever for us to rally support behind funding our local journalism. You can help by participating in our "I Support" program, allowing us to keep offering readers access to our incisive coverage of local news, food and culture with no paywalls.
Make a one-time donation today for as little as $1.