Texas set a new record in May for total liquor sales at bars and restaurants. Kathy Tran
It's no longer a question of "if," rather "by how much." The local bar and restaurant scene is back with margarita machines swirling at helicopter speed trying to keep up. Our cup quite literally runneth over.

Last week the state released total beverage sales across the state for May. AlcoholSales.com dug into that a bit and reported that statewide a new record was set for total beverage sales, "May sales [were] at an all-time high. March of 2019 was the standing record with more than $722,000,000 in total sales. May came in at $737,718,495, this is a 6 percent increase over last month."

In December 2020 and January 2021, total alcohol sales in the state were around $450 million, then dipped to below $400 million in February due to the winter storm when many restaurants were closed and treacherous road conditions kept us home. Since March, however, sales have been climbing and peaked in May at $738 million. 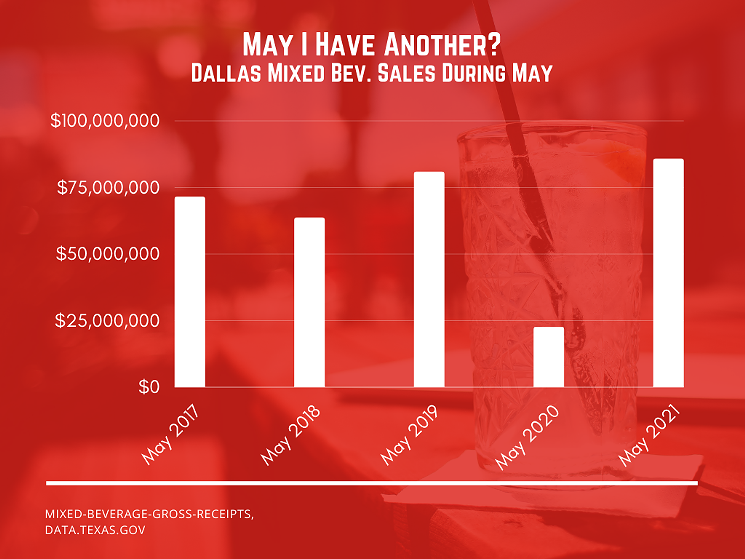 Comparison of total beverage sales in Dallas during May over the past five years
Lauren Drewes Daniels
We pulled the bars and restaurants in Dallas for this past May and compared them with May of the previous four years, as shown in the chart above.

Total mixed beverage receipts in Dallas restaurants and bars this May were 6% higher this year compared to 2019.

Six percent might seem insignificant, but that's an increase of $4.9 million in just 31 days. That's more than one million more beers at $4.75, the average cost of a beer nationwide according to Frommers. That's 33,000 more beers a day in May 2021 versus May 2019.

For fun, below are the 10 highest-grossing restaurants and bars in Dallas in May:

Bottled Blonde, $1.12 million
Happiest Hour,  $1.09 million
Katy Trail Ice House, $956,453
Vidorra, $845,526
Virgin Hotel, $769,031
Citizen, $750,978
Round Up Saloon, $738,441
Nick & Sams Steak House, $732,550
Sporting Club, $612,665
Ritz Carlton $586,963
KEEP THE DALLAS OBSERVER FREE... Since we started the Dallas Observer, it has been defined as the free, independent voice of Dallas, and we'd like to keep it that way. With local media under siege, it's more important than ever for us to rally support behind funding our local journalism. You can help by participating in our "I Support" program, allowing us to keep offering readers access to our incisive coverage of local news, food and culture with no paywalls.
Make a one-time donation today for as little as $1.