You'll get strong Cowboys vibes and excellent wings at Will Call. Photo Courtesy of Will Call
The Cowboys have a big game this Sunday, in case you haven't heard. Kickoff is at 3:30 p.m., perfect for Dallas' all-day Sunday brunch habit. The high temperature on Sunday is expected to be about 52 degrees, a bit chilly, but it'll feel perfect with your jersey and Cowboys beanie.

There are lots of options whether you're looking for an old-school sports bar or a more casual place where people won't throw a plate of nachos at the TV because of the run game. Not that they'd be wrong. But either way, following are some suggestions from our freelance writers: Angie Quebedeaux, Felicia Lopez, Chris Wolfgang and Doyle Rader.

For Those Who Want to Go All In


Despite being one of the oldest bars in Dallas, Stan's Blue Note has plenty of modern amenities. The Lower Greenville institution has a bevy of flatscreen TVs, both inside and out. Patrons are hard-pressed to find a seat without a TV in their direct line of sight, making it the perfect place to watch the Cowboys. What's more, the from-scratch kitchen serves up great bar staples like burgers, nachos and wings.

Will Call in Deep Ellum is one of our favorite restaurants and bars in the city. You can bet the game will be on, and it might get a little rowdy here. They give out prizes and have shot specials when the Cowboys score (but pace yourself because we're gonna win the air game). Be sure to get their recycled wings. All of them.

The Avenue Sports Grill on Greenville Avenue has good brunch and lunch specials, a huge bar area and about 25 TVs throughout the place all showing the major sporting event of the day. If the weather is nice, they will have their sliding bay doors open.

The bloody mary buffet at Ozona Bar and Grill
Angie Quebedeaux
Another good place to watch the game is Ozona Bar & Grill, not only because of their awesome patio, but their make-your-own bloody mary bar will help you drink away your sorrows if the Cowboys don’t show up to win.

Christie’s Sports Bar's new location on Lower Greenville has two stories of space to watch the big game plus a rooftop deck. There are enough TVs to hold your attention during the playoff games and the drink, burgers and bar food are spot-on for Sunday gluttony.

It's crawfish season at Shell Shack locations. Party tip: order 1 pound at a time so they stay warm as you work your way through a pile. And their hand-washing machine was hospital grade before it was cool to have such amenities. You can dig your way through crab legs, crawfish and wash away all the evidence. Beer and wings at Siren Rock Brewing.
Eva Cannon
Siren Rock Brewing in Rockwall has a big indoor and outdoor space with local beer and a craft kitchen, Surf Report, with a full menu of coastal-inspired dishes, bar staples and chicken wings. On Sunday they're running a special: half off all beer to anyone wearing a Cowboys jersey. (They're being equal opportunitists and offering the same deal to San Fran jersey-wearers too).

Chelsea Corner near Park Cities has a good number of TVs (22 to be exact), a great kitchen and $25 bottles of prosecco until 3 p.m. on Sundays for pregaming. Their outdoor courtyard has plenty of heaters and the menu runs from big indulgent plates to gluten-free and vegan Buddha Bowl with Impossible Meatballs. They take reservations through OpenTable.

Katy Trail Ice House in Uptown is an awesome place to watch the game if the weather is great. Not only is it great for football, but also for people watching in general. Their barbecue and burger menu will make you feel like you’re tailgating at the stadium. 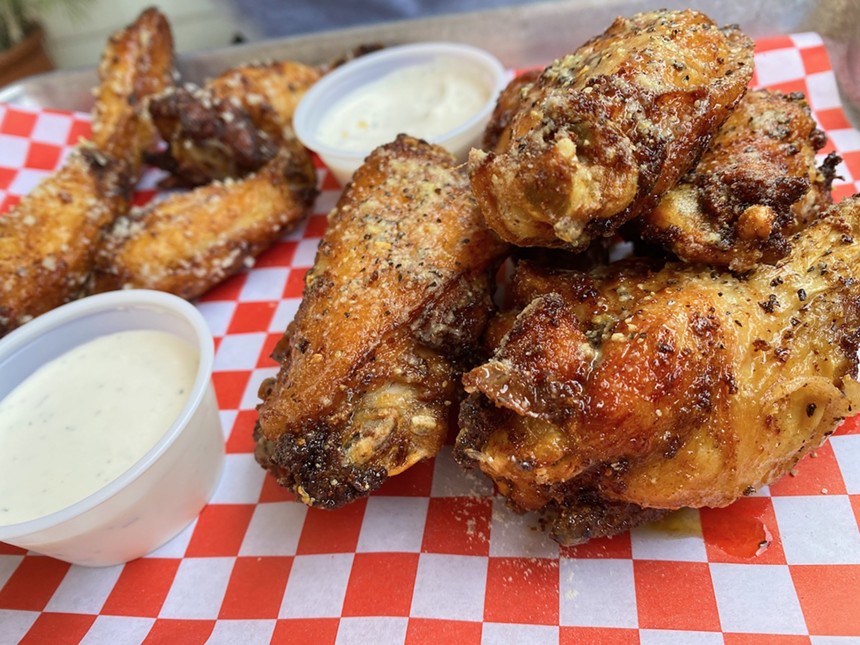 Wings from FireHouse Gastro Park
Lauren Drewes Daniels
FireHouse Gastro Park in Grand Prairie is a fun space to waste away any number of hours, game day or not. Get their mountain of hot chicken french fries or wings and sit out in their big patio to watch the game, which they'll have on a pop-up screen.

The AT&T Discovery District in downtown will have the game on its giant side-of-building media wall. Bring your own chair or blanket here to watch the game picnic style. The Exchange food hall will be open with any number of vendors to choose from. Jaxon's Beer Garden has $4 Miller Lite and Coors Lite.

For the Foodie with a Side of Sports

If food is your main motivation for getting out of the house on Sunday, but you'll casually watch the game if it's on, but without much emotional investment, go to Pho 544 in Murphy. We met this loud and proud family earlier this year and turns out the owner is a die-hard Cowboys fan. You can bet they'll have the game on.

Tricky Fish in Richardson will likely have the game on over the bar. Ari Korean BBQ in Carrollton is always a fun dinner and their upstairs bar would be a fun place to watch the game.

CraftWay Kitchen in Plano has a solid brunch and a nice bar. The bourbon bread pudding is highly recommended.
KEEP THE DALLAS OBSERVER FREE... Since we started the Dallas Observer, it has been defined as the free, independent voice of Dallas, and we'd like to keep it that way. With local media under siege, it's more important than ever for us to rally support behind funding our local journalism. You can help by participating in our "I Support" program, allowing us to keep offering readers access to our incisive coverage of local news, food and culture with no paywalls.
Make a one-time donation today for as little as $1.