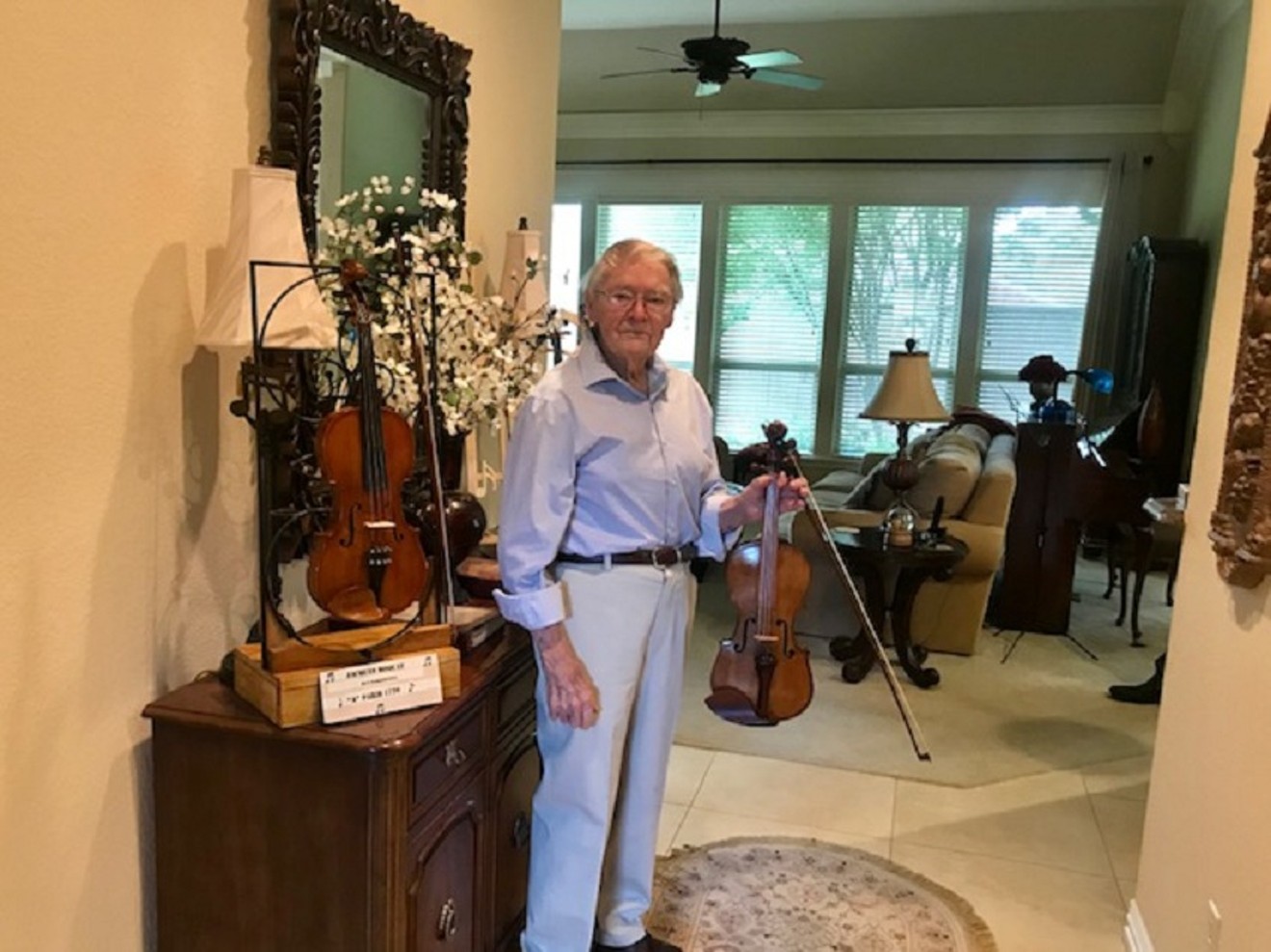 It's never too late. At 87, Al Schahn took on a new career. Karen Gavis
As a boy, Al Schahn knew that the handmade violins his “papa” created made a distinct sound. Now 88 years old, Schahn began patiently restoring musical instruments last year and has since refurbished more than 20 violins, he says, including 13 that his father made. The instruments arrived from places like Denton, Breckenridge, Comanche, Kerrville, Kennedale, Arlington and Dallas. Recently, Schahn strung the first fiddle he crafted himself.

“It’s never been played,” he says of the instrument before giving the wood a few taps. ”It’s like thumping a watermelon … this is ripe.”

Schahn grew up in the Texas Hill Country watching his father mend furniture and make violins and guitars using wood from the trees around Rio Frio. He’d also design special tools for his father to use in his woodworking, which often took place outdoors on a tree stump.

His brother Bill is a pianist who taught Beyonce's teacher. These days, in his spare time, Schahn scours garage sales and estate sales, searching for derelict violins as well as material, such as ornate wood or wrought iron, which he can fashion into musical display stands. He says he once struck a deal at an estate sale for three cast-off violins.

One of the instruments was signed by 20 people and handwriting inside another indicates that it was reworked in 1840. When restoring old violins, Schahn says he doesn’t aim for a high shine.

“It would take away from the value if I tried to make it look new,” he says. “So I just took it to a certain level [and] then quit.”

Schahn used about six different types of wood while making his fiddle. Typically, his father had used spruce wood for the front of a violin and harder wood, such as mesquite or curly maple, on the back. Schahn had trouble finding spruce wood locally, he says, so he settled for a front made of Douglas fir. He says he crafted the back from cherry wood, and during the coronavirus shutdown, he shaped the fingerboard from a piece of cherry wood stored in his attic from an old armoire.

Noting that a millimetre makes a difference in sound, Schahn says he used digital calipers to test the thickness of the wood for the violin. He also used two tuners his father had made from a fallen black walnut tree limb, then made two himself from a piece of the same wood he’d salvaged from his father’s workshop. He also incorporated an arching element that he says is characteristic of instruments designed by luthier Jacob Stainer.

Schahn hopes the slightly wider design will increase the volume. Sharing space with a stored Christmas tree, Schahn would often work in his attic with one of his father’s fiddles nearby serving as a model. Later, he might retire to the garage downstairs where it was cooler. When needed, he’d soak pieces of wood in a laundry room washbasin or mix wood stain to just the right hue.

“I was busy.”– Al Schahn, on why he waited so long to start his new career.


“You don’t just use any stain,” he says. “You have to use shellac. It allows the sound to penetrate
and come through.”

When pondering why he had waited until the age of 88 to build his own violin, Schahn says, “I was busy.”

Schahn retired from Vought, the aerospace company where he’d worked as an engineer. He’s designed hundreds of homes in Arlington, where he lives, and in his off time, he would lay rock.

“I formed my own way of doing things from the farm,” he says, recalling an airplane which he’d built himself as an 8-year-old boy and named “White Cloud.”

“In farm life, if Papa said go fix something you went and fixed it,” he says. “You didn’t ask how or why.”

Emily Klophaus, granddaughter of a man with whom Schahn worked at Vought, provided the strings for the violin. And Schahn, who once taught Klophaus at First Baptist Church of Arlington, says his former Bible class student will be the first to play the fiddle.

“It’s going to be sitting here waiting,” Schahn says.
KEEP THE DALLAS OBSERVER FREE... Since we started the Dallas Observer, it has been defined as the free, independent voice of Dallas, and we'd like to keep it that way. With local media under siege, it's more important than ever for us to rally support behind funding our local journalism. You can help by participating in our "I Support" program, allowing us to keep offering readers access to our incisive coverage of local news, food and culture with no paywalls.
Make a one-time donation today for as little as $1.