Nancy Cartwright, a voice actress best known for playing Bart Simpson on The Simpsons, will screen her semi-autobiographical film In Search of Fellini at the USA Film Festival. Courtesy of Spotted Cow Entertainment


Actress and writer Nancy Cartwright may have one of the most lucrative voice-acting careers in the history of entertainment, but that doesn't mean her wandering days are over.

The Ohio native turned Californian, best known as the voice of Bart Simpson, lives in a historic farm-style home in Northridge that once belonged to one of the Andrews Sisters. Cartwright says she has converted the house back into a farm, complete with small animals like chickens and bunnies. It's basically a personal petting zoo for her 8-month-old granddaughter.

"Bart Simpson is a grandmother," Cartwright says. "I just had to say that."

She's been looking for a classic pickup truck to go with her new farmhouse and she found a pristine 1952 Chevrolet from a seller in North Carolina that's cobalt blue, the same color as the iconic shorts Bart has told so many people to eat over the last 28 years. Getting the truck is the perfect excuse to go on another adventure, she says.

"It was owned by this guy who was a pit crew chief for Jeff Gordon, and all of this ties together because I've got my NASCAR driver's license and I love driving fast cars," Cartwright says. "It's cobalt blue, and the thing is so cool. So I'm going to pick this up and drive it back cross country. I'm driving it home, and I'm going to have my own little pit crew with me."

Cartwright went on a similar trip in 1985 before she became a regular cast member of The Simpsons. She set off for Italy to meet the acclaimed director Federico Fellini after being inspired by his Oscar-winning film La Strada.

When she got home, Cartwright says, "I realized I had a story to tell." Cartwright first wrote In Search of Fellini as a one-woman show in 1995 along with writer Peter Kjenaas, but she always envisioned her trip to find the elusive Fellini as a movie.

"The time was never right and I didn't have the confidence level to think I could do this as a film," she says. "We started to develop it and write screenplay after screenplay and were changing it to make it better. I didn't have the power that I have now or the relationships, but mostly, it was the confidence level to be able to write something and produce a film. So that took a bit of time."

It took 20 years, to be exact, but now that movie — also co-written by Kjenaas — is finally finished. In Search of Fellini stars Ksenia Solo, Maria and Mary Lynn Rajskub and will be screened on Friday at the Angelika Film Center in Dallas as part of the USA Film Festival. 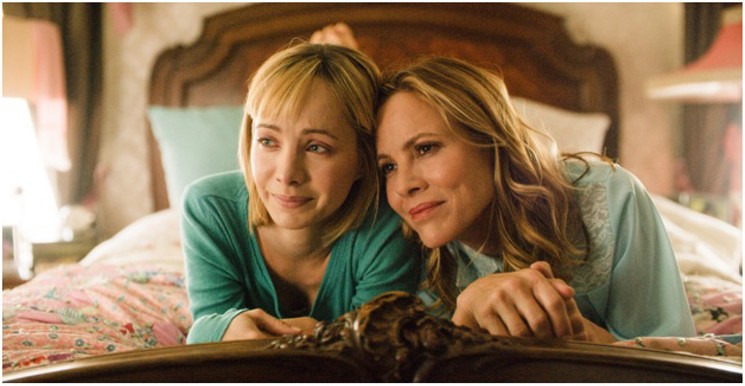 Ksenia Solo and Maria Bello star in In Search of Fellini, a film written by Cartwright and Peter Kjenaas that will be screened as part of the USA FIlm Festival this Friday at the Angelika Film Center.
Courtesy of Spotted Cow Entertainment
Cartwright says her 1985 journey started in an acting class where her teacher recommended the '54 Fellini classic La Strada, a heartbreaking story about a woman named Gelsomina who is sold to a sadistic and controlling circus strongman by her mother. She's eventually encouraged to consider her true value and destiny with the help of a dashing young tightrope walker nicknamed "The Fool."

"I looked at it and I was just captivated by Masina playing Gelsomina, the little clown," Cartwright says. "So I started putting scenes up in my class and casting guys as Zampanó [the strongman played by Anthony Quinn] and I was always Gelsomina, of course, and a spark went off. I thought, 'Wow, maybe I could do this as a play.'"

Cartwright called the legal holders of the rights to Fellini's work so she could produce her play, but they weren't very encouraging.

Lucy Cunningham, the main character in the film played by Solo, goes on a journey similar to the one Cartwright went on in 1985. She's not a carbon copy of Cartwright's younger self, but the overall journey is true to her experience, Cartwright says.

"There are some things we altered just a little but there also things that did happen [in real life] when you see the movie," Cartwright says. "I did get proposed to and I did fall in love with this guy briefly and I had a little incident in Venice that was, yeah, let's just say I got myself in a very awkward situation so I'm not giving away too much of the movie."

Cartwright has had a lot of time to fine tune the stories. She's performed them in her one-woman show, and shared them at countless dinner parties over the last two decades. "The versions of the story have changed as I was creating it, but going back to the original journey, that was always consistent," she says. "People said, 'You've got to do this. You've got to do this as a film

The idea endured and she finally acted on it, and Cartwright sees a message there. "Everybody serves a purpose and if you have a dream, you should do everything to make your dream come true," she says. "It's kind of like an underlying theme in the life of Nancy Cartwright."

The USA Film Festival will screen In Search Of Fellini at 7 p.m. Friday, April 28, at the Angelika Film Center, 5321 E. Mockingbird Lane. The screening will be followed by a Q&A with screenwriters Nancy Cartwright and Peter Kjenaas, producer Monica Gil and actress Mary Lynn Rajskub. Tickets are $10 at the door, usafilmfestival.com.