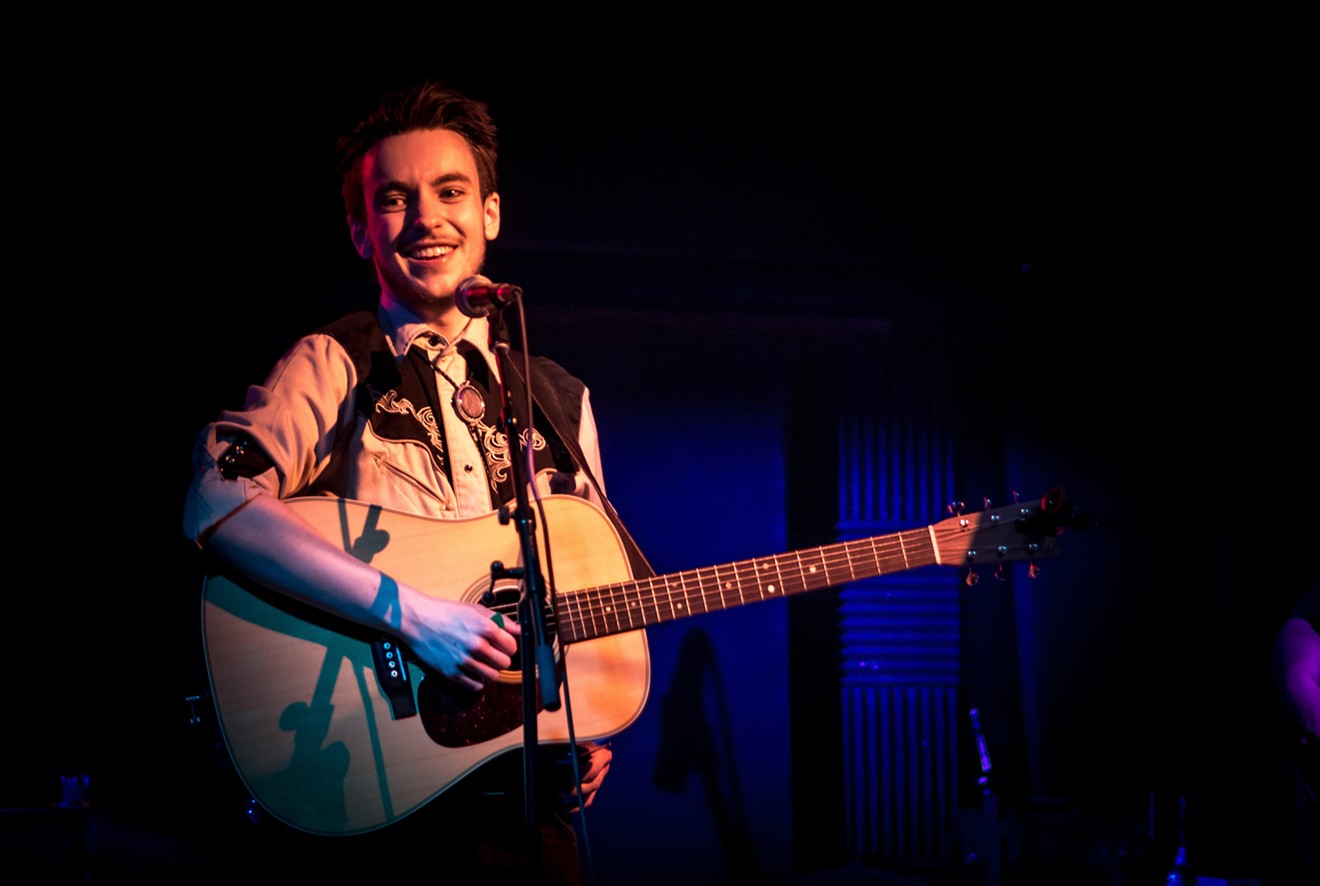 With his new album, Kirk Holloway breathes the same air as Texas outlaw country artists. Jessica Waffles
Despite all the clichés that say otherwise, country music consists of a wide variety of moods. From Patsy Cline to Sierra Ferrell, Charley Crockett to Charley Pride, Loretta Lynn to Mojo Nixon, all fall under country's wide umbrella. That ocean of listening possibilities may seem daunting or crowded — even on a local level — when trying to search for the true country variety containing grit and soul, but fear not. We've waded through the waters of modern country music and have compiled a list of 13 non-cheesy country artists with the big plus that they all play in Dallas. So put on your best Stetson, dream dreamy dreams of Adair's Saloon on a Friday night and listen to these artists for whatever boot-scooting that must get done.

Kirk Holloway
Growing up, Kirk Holloway thought that outlaw country legend Merle Haggard was “just what music sounded like.” Holloway's music denotes a timelessness and honesty that is all too rare in these times of Top 40 country-pop music, and his recent release “Wrong Ways” evokes self-reflection that's par for that course.
Justin Pickard & the Thunderbird Winos
Justin Pickard’s laurels include the Best Americana award from last year's Dallas Observer Music Awards and, maybe more important, the respect and admiration of every musician who has come into contact with his music. Recently, Pickard trekked with his band down to Sun Studios in Memphis where luminaries such as Elvis Presley, Johnny Cash, and Carl Perkins also recorded to lay down his next album, to be released on Fun Guy Records, the label of Dallas’ own luminary, the Reverend Horton Heat .
Tin Man Travis
Tin Man Travis is a country-blues artist who plays around regularly. When you can’t catch him anywhere from Dallas to Decatur at any number of local dive bars playing his brand of “blues-infused psycho-folkabilly,” you can find him streaming his variety show TuPlay Tuesdays with bandmate James Kirk Hampton and guests on Facebook Live 8-10 p.m. every Tuesday.
Sarah Johnson
Sarah Johnson is fairly new to the Dallas scene but already has an album recorded at Modern Electric Sound Recorders and a show at The Kessler under her belt. Her music borders on indie, with pastoral songwriting and a conversational vibe that carries through her recently released first record, Volcano.
Jenna Clark
Originally hailing from Ocala, Florida, before settling in Dallas, Jenna Clark picked up a lot of influences along the way. She’s been referred to as soul, jazz, country, blues and everything in between. Clark’s music is enigmatic, but, especially lately, has been more influenced by her adopted home of Texas. You can see her play 2–5pm every third Saturday of every month for Hern’s Country Saloon at Three Links in Deep Ellum.
Ottoman Turks
At its core, Ottoman Turks is probably a country band but with their amount of punk rock and booze-infused mania it can be hard to tell. They’re raucous, loud, insane and amazing — as displayed in one of their newer music videos, “Wound Up.” You can catch them June 4 and June 5 at the Texas Music Revolution festival.
Joshua Ray Walker
Joshua Ray Walker has been referred to by Rolling Stone magazine as “country’s most fascinating young songwriter,” and hyperbolic as that may seem, they weren’t kidding. His newest album, Voices, oscillates between fast barn burners to ballads where Walker’s haunting voice borders on the side of wail. His music is truly not to be missed.
Frankie Leonie
Frankie Leonie’s music walks the line between vintage and modern. It sounds like a Texas sunset in a way in that it’s warm, big and sort of settles the soul in a way that can’t quite be described in words. You can catch her at Three Links on June 3 with fellow local badasses Tommy Luke, Jake Quillin, Wesley Geiger and Billy Law.

Justin Cashion
Justin Cashion’s music ranges from absurdist narratives about aliens come to earth to boot-stomping heavy rock songs about mortality — all tied together with the countrified twang in his voice, earned in his hometown of Paris, Texas. Watch the recently released music video “They’re Here” for an example of the former of his two polarities.
Madison King
When you don’t find her around town cooking or bartending, you can catch Dallas mainstay Madison King playing. Her songs are full of heart, soul and magic. If you tip her enough at her next show maybe she’ll release a new album for us! Until then, there’s her last full release, Livin’ Right.
Charlie J Memphis
Charlie J Memphis’ songs have to be heard for one to believe they came from a man so young. The gravel and honesty in his voice often get him compared to country legends. His latest release, “Learning to Cry,” has his typically somber voice in full effect over a slow and meditative train rhythm on the drums and pedal steel soaring and wailing along with the lyrics.
Meredith Crawford
Not to brag because we saw her first, but Meredith Crawford has one of the greatest voices you will ever hear in country music (if you can limit her to that genre), or otherwise. The depth of her lyrics mixed with her voice is a sight to be seen, or, well, a sound to be heard.
Pedigo’s Magic Pilsner
In addition to producing the records of four of the artists listed above, renowned producer John Pedigo's band John Pedigo’s Magic Pilsner is a true force of honesty and grit. His love of music comes through in Pedigo’s own music as well as in the projects he produces. Over the pandemic, Pedigo set out to release a single every month, the newest of which is both heartbreaking, hopeful and, most of all, beautiful.
KEEP THE DALLAS OBSERVER FREE... Since we started the Dallas Observer, it has been defined as the free, independent voice of Dallas, and we'd like to keep it that way. With local media under siege, it's more important than ever for us to rally support behind funding our local journalism. You can help by participating in our "I Support" program, allowing us to keep offering readers access to our incisive coverage of local news, food and culture with no paywalls.
Make a one-time donation today for as little as $1.