Dallas’ Tin Man Is a True Man of the Blues 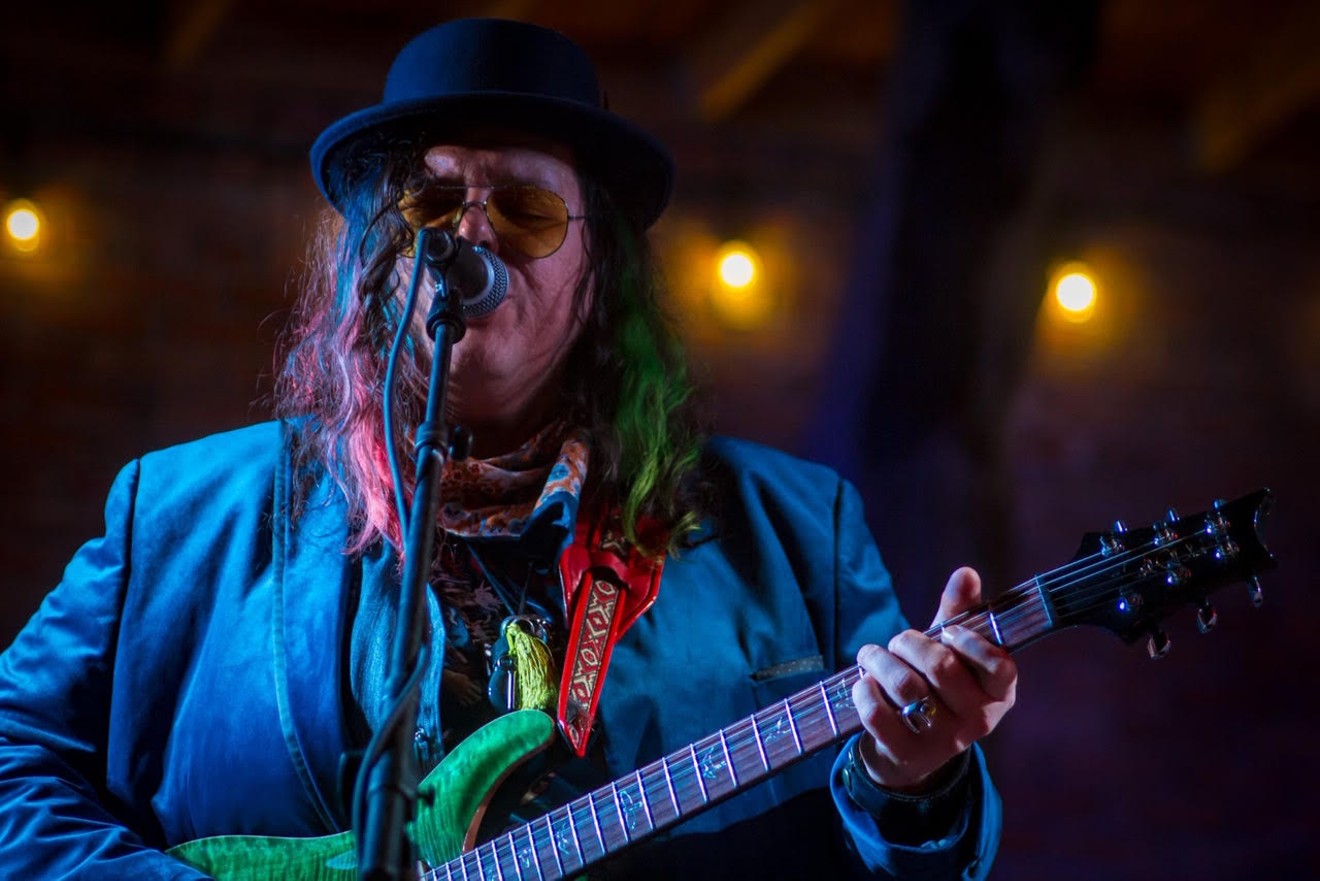 The enigmatic Tin Man Travis is a true blues man who learned the pentatonic scale in jail. Waffles Weekly
A rhythmic stride of heavy, clinking footsteps ring across the wood floors like the start of an old Western movie, as a burly, long-haired man enters wearing an oversize blazer and a black, feathered gambler hat covering his green-streaked hair. A cool rock-star swagger envelops him, making you feel as if you should ask for an autograph. And maybe you should. The man is none other than musician Tin Man Travis, one of the best guitarists in Dallas.

And Tin Man's presence is hard to miss, even if he hadn't made such an entrance. In addition to his towering height, he's also wearing an abundance of beaded necklaces and cuffs, and yellow aviator sunglasses. He sits down with a whiskey and a La Flor Dominicana cigar in his hand, crested with a large musical note on its dual-colored side.

“It’s kind of like my life,” Tin Man says, as he observes the cigar, “first half dark, second half light. And the music is on both sides.”

After thanking his bartender with a tip, Travis begins to puff on a rainbow vape, outside the door.

“I don’t always smoke cigars,” he says. “Only on special occasions.”

Tin Man takes a seat on the patio at one of his favorite Deep Ellum restaurants, St. Pete’s Dancing Marlin, where his bassist, Jamie Vahala, and wife of five years, Amy, sit with their dog, Bella. The group laughs and shares stories over tuna crostini.

When speaking on his influences, he and Amy drift into another world as they begin to sing together, looking for the lyrics to one of his favorite songs from Bugs Henderson, whom he credits as his hero. They harmonize back and forth: “The road is long / but it pays the bills. / It’s lots of hard work y’all / But it’s lots of hard thrills / All these years / I’ve watched it go by / A honky-tonk traveler / A man satisfied.”

The musician in him is conspicuous, as Tin Man begins to uncover a deep, passionate love for music reflected in his humble appreciation for art in all forms. Onstage, Travis dives into a mixture of blues, country, rock and funk, which he denotes as “Texas blues-infused, psychedelic, psycho folkabilly.” Performing solo under his childhood nickname, Tin Man, he also plays in several bands: Tin&Tonic, with Vahala, pianist James Kirk Hampton and others; as well as The Tuxedos, also with Vahala, Justin Cashion and drummer Eric Ellis.

The East Texas, Tyler-born guitar player and singer-songwriter grew up in East Plano with a family full of singers, including both his parents and sister. But it wasn’t until he was 12 and his mother got him guitar lessons that he found his niche in music.

“I grew up loving music,” Tin Man says, seemingly traveling back in time. “My parents never forced it on me. I’m not a great singer like my family, but I was a creator of music, a songwriter.”

While growing up, he found his interest in hip-hop music as an MC, battling 8 Mile-style in what is currently Ruins, then called Sandbar. Tin Man continued his guitar lessons and began dabbling in music theory. But it wasn’t until years later when he went to prison, at age 22, that he would take the leap and become serious about making music on his own.


“I’m not a great singer like my family, but I was a creator of music, a songwriter.” — Tin Man Travis

After being jailed for firearms possession, Tin Man found himself in the worst spot of his life, which, he says now, would end up being his saving grace. In prison, he began studying music in a new way, led by a cellmate who taught him about the blues scale.

“Before that, my mind frame was, if I know how to play songs, I know how to play guitar,” the guitarist explains, “but it’s the exact opposite. If you play guitar, you can play songs. When I was in prison though, I was told I needed to worry about my timing and learn what pentatonic means. It allows you to navigate five notes instead of seven — it’s more simple and soulful.” And just like that, he became a man of the blues.

Tin Man went on to study music business at Collin County Community College after his release and learned how to manage his career. He says he then discovered where he'd like to see himself in the music industry. Rather than dreaming of performing for the masses, Tin Man wanted a captive audience, no matter how small.

It seems the Tin Man has a heart after all; and we are lucky to have this one in our city. Tin Man is known as a paternal figure of sorts, handing out advice to newbie musicians, and always protecting women around him (known or not) from harassment. Not on his watch. The virtuoso blues man plays several residencies around town, like at the Balcony Club, and High & Tight.

He recalls one of the toughest moments of his career, when he performed in front of a crowd of Confederate flag-waving patrons. His repugnance in telling the story now is unmistakably sincere, as he puts a hand on his head, admitting that he was “ashamed” to have been on that stage.

It’s more than skill and music knowledge that dignify an artist like Tin Man. His devotion to his fans and humanity are what keep his name in the minds of those who have met him or seen him play. He’s the type of artist to skip his own set break to visit with fans, and he takes the time to give respect to the bar owner and all the service staff after a show. Tin Man is not strategically but genuinely nice to everyone around, and that collective kindness is what brings him back to venues time and again.

“The material makes the people move, yes,” he explains, as his cool demeanor becomes excited, “but I talk to them, and a lot of people are too caught up in how they look and how they come across visually. It’s not about that, it’s, ‘Did you go talk to them?’ ‘Are you willing to sacrifice your break to talk to this one person?’ That’s the thing, ‘Do you care about them like that?’ Because I care about people.

“It’s something I preach in my music, and I don’t mean to preach on a religious, dogmatic angle, but I preach to people on the fact that we’re human beings — we should get along — and if you don’t want to get along, why?”
KEEP THE DALLAS OBSERVER FREE... Since we started the Dallas Observer, it has been defined as the free, independent voice of Dallas, and we'd like to keep it that way. With local media under siege, it's more important than ever for us to rally support behind funding our local journalism. You can help by participating in our "I Support" program, allowing us to keep offering readers access to our incisive coverage of local news, food and culture with no paywalls.
Make a one-time donation today for as little as $1.