These Cereal and Booze Cocktails are Grown-Up Tested and Approved 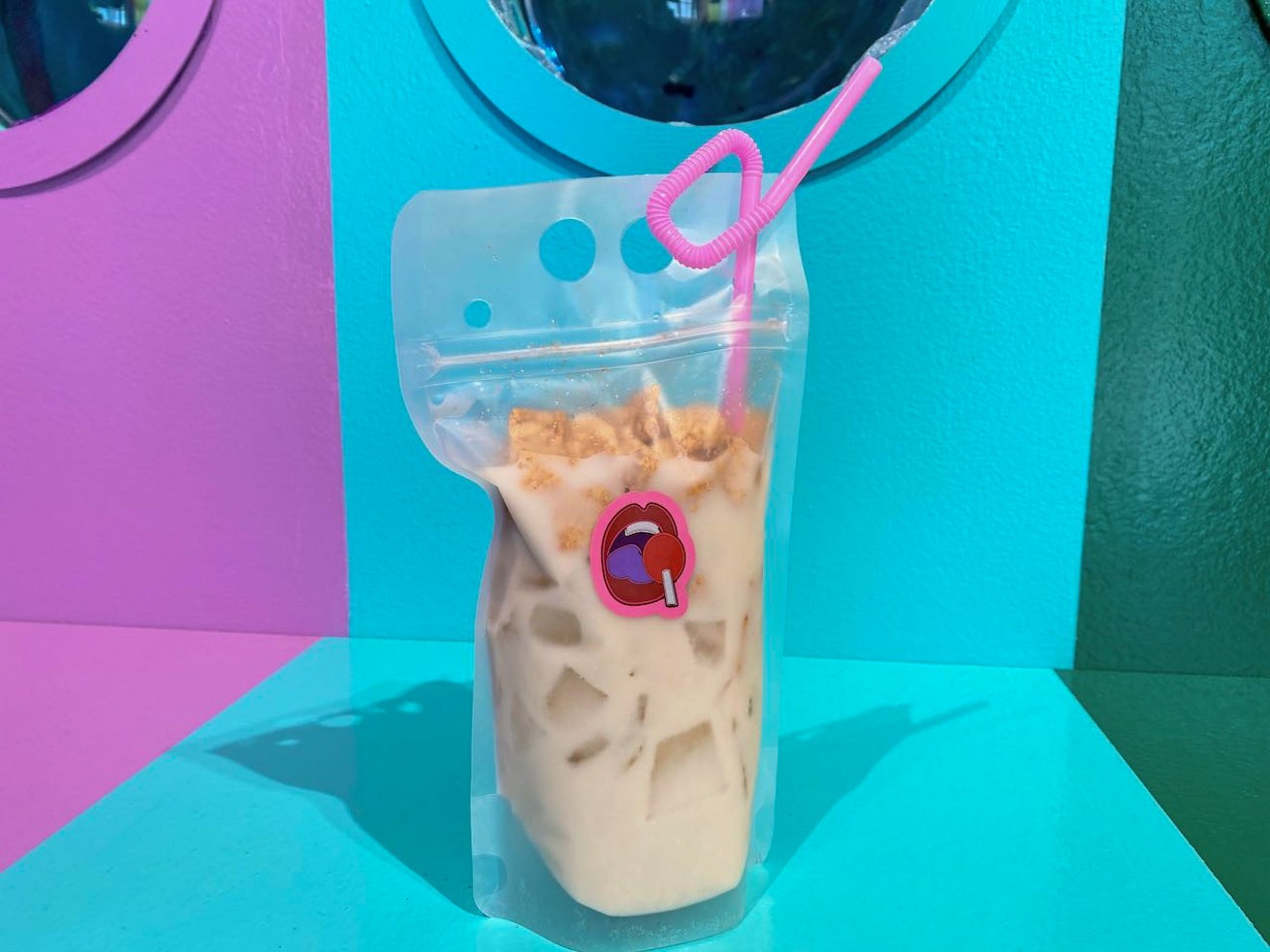 The Cinnamon Toast Pouch made with cinnamon-y vodka and almond milk, topped with a scoop of cereal. Lauren Drewes Daniels
In Noble Ape, stand-up comedian Jim Gaffigan recounts taking his five kids to London and how exhausting it was to chauffeur them around all day, lamenting, “Kids never wanna do something fun like sit in a dark bar and drink beer.”

Well, Dallas has a bar Gaffigan and his kids would approve of. And it’s adjacent to a museum, so there’s culture to boot.

Cereal Bar is the last stop on a tour through Sweet Tooth Hotel (2316 Victory Park Lane), which is not actually a hotel, rather a boutique museum. Currently, it has a pretty amazing textile installation by local artist Molly Sydnor. While perusing the show, I wasn’t even aware there was a bar. When I saw it was a cereal bar with boozy-cereal drinks, I was at pure Elf-Christmas-level of excitement. This Lucky Charms frozen raspberry lemonade drink is topped with just the marshmallows from the cereal (you know, the good part).
Timothy Albrooks
The Cereal Bar menu includes (literal) bowls of cereal, plus mixed drinks and beer. General manager Becca Hummel is the resident mixologist and creates the concoctions.

The Cinnamon Toast Pouch is made with almond milk and cinnamon-flavored vodka, and it was everything I hoped and dreamed it would be. Bonus: It's packaged like a Capri Sun. The only slight tweak I’d make next time is to request my cereal booze “neat,” as the ice doesn’t mix well with the cereal when eating by the spoonful.

For the holidays, including Halloween, they offer specialty drinks, such as a Boo Berry Fizz, which you can get sans booze for any scary little people you have with you. This bubbly blueberry mocktail comes with a rim bedazzled with marshmallow fluff and cereal.

The Magically Delish drink is a frozen raspberry, lemonade drink with a shot of whipped cream vodka, topped with Lucky Charms marshmallows. There's also a Hocus Pocus Pom Martini made with dry ice.

Fortunately, they have a large outdoor seating area, which is along the Victory Park Plaza near a water fountain. You don’t have to go through the museum to order drinks from Cereal Bar (but you should, because you want to support local artists). The bar has a digital menu so guests can order outside and not even go in.
KEEP THE DALLAS OBSERVER FREE... Since we started the Dallas Observer, it has been defined as the free, independent voice of Dallas, and we'd like to keep it that way. With local media under siege, it's more important than ever for us to rally support behind funding our local journalism. You can help by participating in our "I Support" program, allowing us to keep offering readers access to our incisive coverage of local news, food and culture with no paywalls.
Make a one-time donation today for as little as $1.