The new facility is expected to open in this fall. Community Beer Co.
Community Beer Co. has announced they're relocating to a new 70,000-square-foot facility. Their new digs will be at the recently renovated Pegasus Place, formerly the Exxon Mobil campus, at 3110 Commonwealth Drive. This is just 4 miles northwest of their current Design District space.

According to a statement released by Community Beer Co., the new location will offer expanded brewery and distilling operations, a two-story taproom, a restaurant, an outdoor beer garden, multiple event spaces and a concert venue.

Distilling operations, you say? Yep. Community is expanding its product line, which currently includes beer and hard seltzer, to whiskey, vodka and gin.

Construction has already begun, and they expect to have a grand opening in the fall. 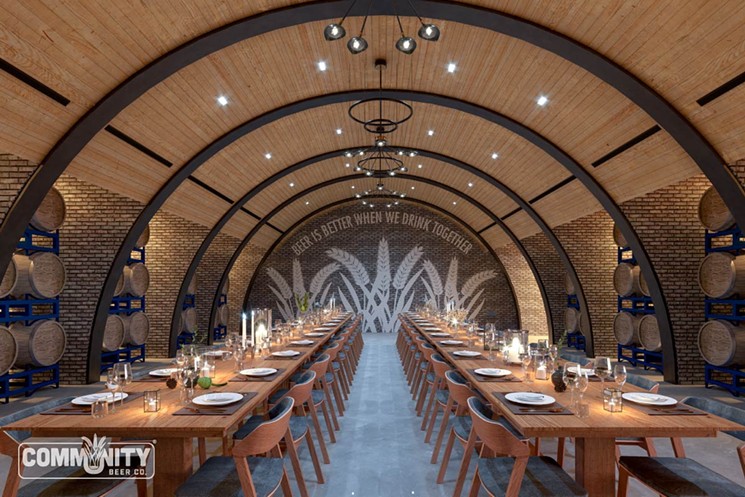 An artist rendering of the barrel room at the new facility, which will provide an elevated craft beer experience.
Community Beer Co.
Community Beer Co. opened in 2013 as one of the first craft breweries in Dallas and helped clear a complicated regulatory path for the burgeoning local industry. Since that time they’ve gone on to become a staple local brewery. They’ve also worked to expand their role in the community with things like The Greater Good, which sent volunteers across North Texas after the freeze this past February to fix busted pipes.

Also, just before the pandemic, the brewery partnered with the city of Dallas for a program highlighting local artists who created custom artwork for cans of their Texas Lager.

Their current facility is closed and will not reopen. If you're hankering to hang out with the folks at Community, they just announced they're teaming up with the Perot Museum starting April 15 for Thursdays on Tap.

From a Facebook post: "Safely hang out with other curious-minded people at the museum plaza while enjoying games, great food, and of course, plenty of delicious Community beer. Enjoy live music, food trucks, and access to the Museum, and the new traveling exhibition, The Science of Guinness World Records ..."

Cheers, Community!
KEEP THE DALLAS OBSERVER FREE... Since we started the Dallas Observer, it has been defined as the free, independent voice of Dallas, and we'd like to keep it that way. With local media under siege, it's more important than ever for us to rally support behind funding our local journalism. You can help by participating in our "I Support" program, allowing us to keep offering readers access to our incisive coverage of local news, food and culture with no paywalls.
Make a one-time donation today for as little as $1.