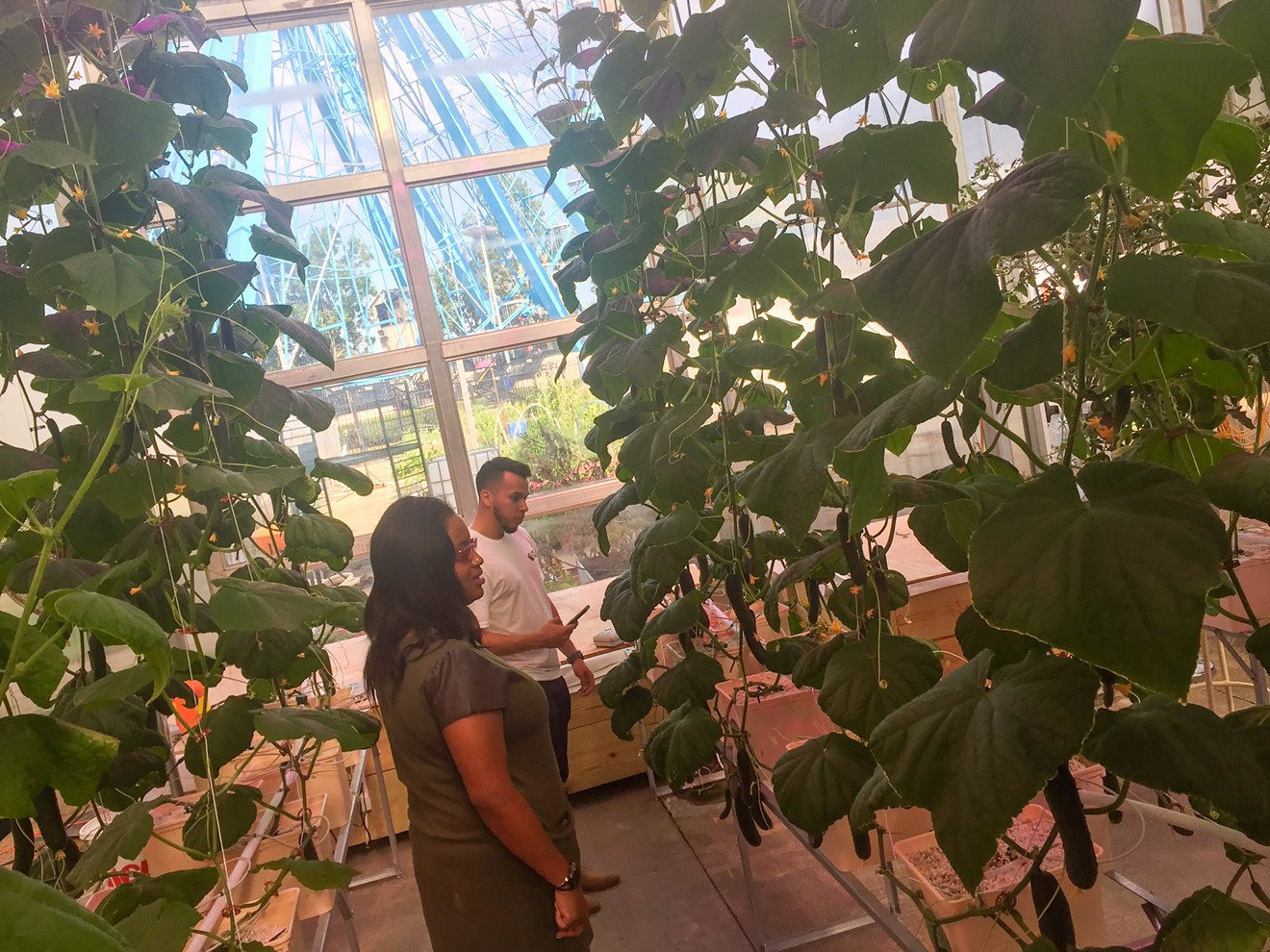 You can check out the cool new hydroponic garden that will help feed South Dallas soon. Micah Moore
There is a bountiful surprise at the State Fair of Texas this year, tucked away in a greenhouse beyond the Star of Texas Ferris wheel and carnival games.

Big Tex Urban Farms is instilling urban agriculture practices to help fill in food deserts of South Dallas. A hydroponic garden is growing cucumbers, tomatoes and a variety of greens along with microgreens and melons.

On display in the Errol McKoy Greenhouse on the Midway are a variety of hydroponic systems — tower and vertical — multiple deepwater culture systems and vine and microgreen beds.

“There is nothing we know of like this nationwide,” says Drew Demler, director of horticulture at Big Tex Urban Farms. “Everything that isn’t getting sold will be donated to shelters in the area, just across the street.” Cucumbers are among the produce growing in the hydroponic gardens at this year’s Big Tex Urban Farms exhibit.
Micah Moore
The hydroponic garden on display at the fair marks just the beginning of a three-year plan to make Hatcher Farms a profitable operation serving South Dallas, says equity activist Brad Boa.

“There are so many benefits to an urban farm that helps create sustainable neighborhoods,” Boa says. “It’s an avenue for economic development and being able to stand on your own.”

The plan aspires to employ as many as six people to operate the garden while cultivating community. The neighborhood farm is situated on the northern edge of a vast food desert that encircles the city on Dallas’ southern and western sides.

It’s all just steps away from DART’s Hatcher Station near Fair Park and the Parkdale and Piedmont Addition neighborhoods.

The garden will allow seasonal crops as well as year-round access to nutritional vegetables grown indoors.

Several groups are involved in the project: DART donated the land, Green Mountain Energy’s Sun Club donated $115,000 and Big Texas Urban Farm is getting the farm off the ground. It’s also supported by the city of Dallas, Dallas ISD, Southern Methodist University, Get Healthy Dallas, EarthX, the State Fair of Texas, Hort Americas and Texas A&M AgriLife. It takes a village.

The hydroponic garden is the last phase of Hatcher Farm. The climate-controlled garden will be housed in a shipping container, where lettuce and other greens will be grown year-round.

Impressively, hydroponic gardens use about 85% less water than traditional agriculture.

“Not only are we providing access to greens in an area where they won’t be found otherwise, but also hydroponic gardens are more environmentally friendly,” says Stacy Mehlhoff, Sun Club executive director.
KEEP THE DALLAS OBSERVER FREE... Since we started the Dallas Observer, it has been defined as the free, independent voice of Dallas, and we'd like to keep it that way. With local media under siege, it's more important than ever for us to rally support behind funding our local journalism. You can help by participating in our "I Support" program, allowing us to keep offering readers access to our incisive coverage of local news, food and culture with no paywalls.
Make a one-time donation today for as little as $1.