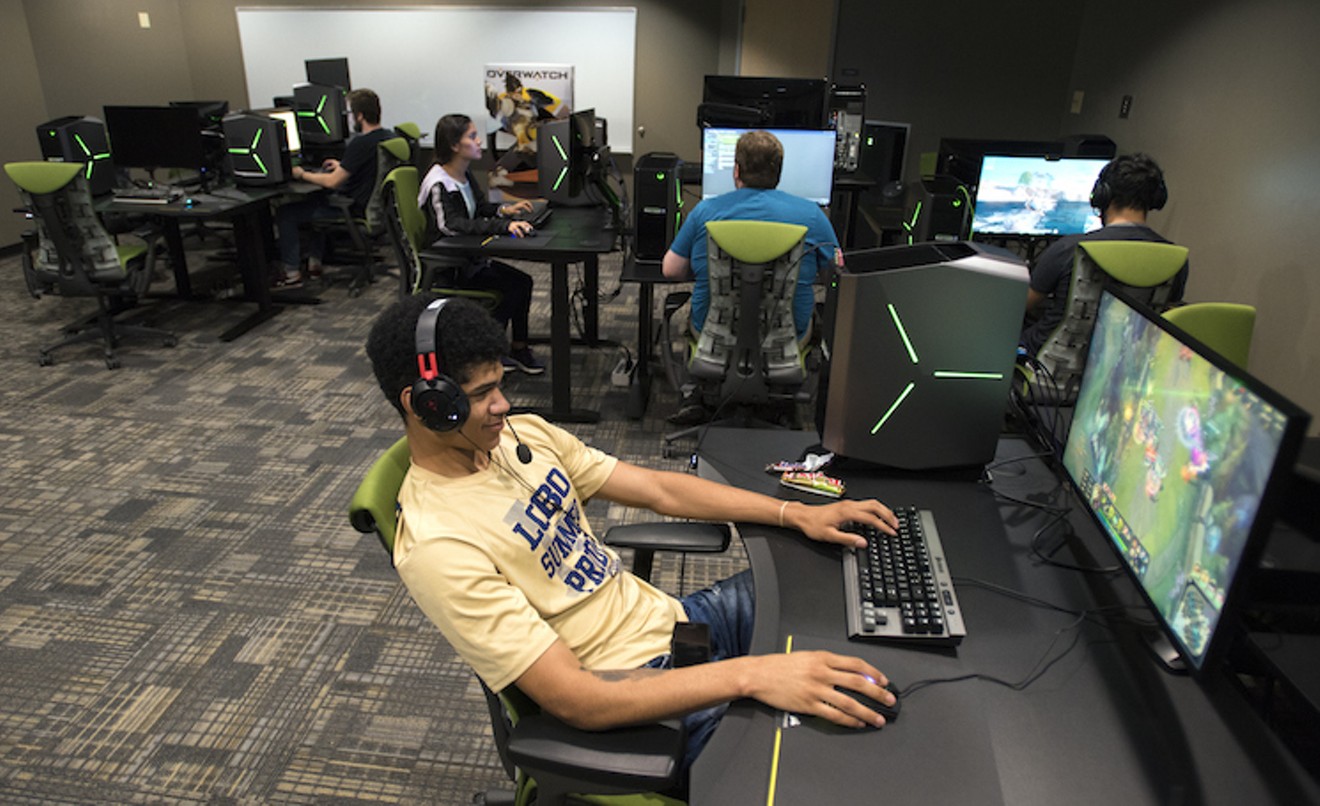 The Nest has 15 virtual reality rigs and ergonomic chairs. courtesy UNT
The University of North Texas is hoping to become a pioneer in eSports. On Aug. 30, it will open a new practice space called The Nest inside the Media Library.

The Nest will provide a place for teams playing various competitive video games, from Overwatch to League of Legends to Hearthstone, to bone up. Any university student, staff member or faculty member with a simple passion for gaming is also welcome to take one of The Nest's ergonomic green seats.

Elizabeth With, vice president of student affairs, took an unused office space and filled it with 15 custom, virtual reality-capable rigs equipped with the most popular multiplay games. If Summoner’s Rift isn’t your favorite after-school spot, the computers can also be used for game design, multimedia work or 3-D immersion.


"It's a whole new language. I watched an entire weekend of League of Legend tournaments on ESPN3, and it made no sense to me. It's amazing, exciting and frankly overwhelming." – Laurie Kline, director of UNT rec sports

“There’s all this cool software out there that allows students to design and edit and create things, and The Nest will help bring it all to students,” says Erin Miller, head of the Media Library.

Three university organizations — Recreational Sports, the Media Library and Student Services — came together to make it happen. They had been talking independently with UNT Gaming and eSports, the largest and most prolific gaming group on campus, about providing better facilities for more serious play. Once they realized the shared goal, they pooled their resources.

“What we have now has been our vision from the beginning, but it happened so much sooner than we could have imagined,” says Diane Robson, media librarian and faculty chair for UNT’s eSports club.

Many of the faculty members who participated didn't fully understand eSports, but they understood it's a rising trend that's hitting North Texas hard. Earlier this month, one of the world's top eSports teams, OpTic Gaming, announced it was relocating its headquarters to Dallas.

“For me, it’s literally learning something from the ground up. It’s a whole new language,” says Laurie Kline, director of Recreational Sports. “I watched an entire weekend of League of Legend tournaments on ESPN 3, and it made no sense to me. It’s amazing, exciting and frankly overwhelming.”

The new facilities weren't cheap, and Kline was mildly shocked the groups were able to fund it.

“I got back to Elizabeth with a plan and told her that getting the students everything they need is going to cost like $200,000, and she said, ‘OK,’” Kline says.

For students passionate about gaming, The Nest proves that the administration sees gaming as a serious path to career success.


"I got back to Elizabeth with a plan and told her that getting the students everything they need is going to cost like $200,000, and she said, 'OK.'" – Laurie Kline, director of UNT rec sports

“It’s got everything we need and a little bit more,” says Ethan Vinante, president of UNT Gaming and eSports. “The school has been really good about looking ahead and understanding that eSports is where everything is going.”

Vinante plans to get his teams registered for weekly practices with coaches as soon as the semester starts. Players and coaches will receive one-on-one time that is crucial for developing the strategies needed to clinch victory in tournaments.

“This space will make our teams better at communication and better at performing. Many of our team members have never met each other,” Vinante says. “This will help us address potential problems and work on teamwork.”

Other universities, such as Berkeley and Utah, have varsity eSports teams sponsored by university athletics, and UNT's investment in The Nest means it could become home to the next big eSports team. Vinante hopes the move inspires other schools in North Texas to follow suit.

“If I can point to another school and say, ‘Hey, they’re catching up,’ I can give our teams a kick in the pants,” Vinante says. “We can challenge each other in that way and grow stronger together.”

Healthy rivalries are all part of the landscape, and UNT is planning to steal some thunder this year in Blizzard’s Heroes of the Dorm, a college tournament of the game Heroes of the Storm.

“UTA won last year and got second the year before, so this year we’re looking to kick their ass,” Vinante says.