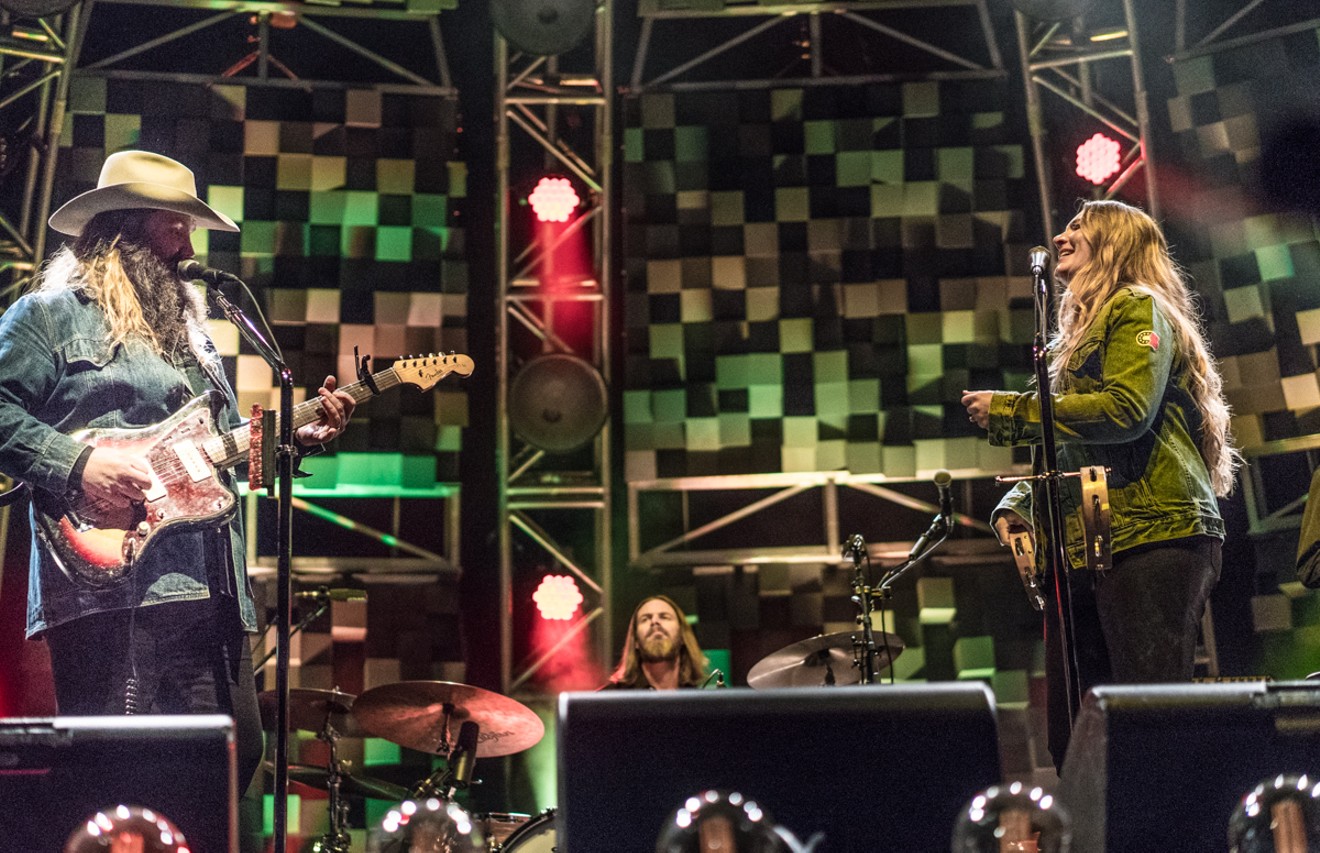 Rarely does a musical forebear open for a scion, but so high has Chris Stapleton’s star risen in a short amount of time that Marty Stuart — with iconic hair and embroidered suit — opened the show before a sold-out crowd Saturday night. Stapleton burst into country music’s consciousness around 2015, when he swept the Country Music Association awards and gave a landmark performance with decidedly not-country Justin Timberlake.

The momentum continued in Dallas. He wrung cheers from Dallasites shivering at Starplex’s outdoor pavilion from the moment he stepped out in reams of blue smoke to opener “Might as Well Get Stoned.” The song was one of many odes to substances performed Saturday, including many to whiskey. So much whiskey.

Within several songs, it became clear that Stapleton’s signature furrowed brow and pared-down presentation belied a jovial streak. With his face nearly hidden by cowboy hat shadow and beard, he smiled and initiated what turned into ongoing banter with the receptive crowd.

“I’m going to have a lot of fun tonight because I’m too cold not to!” he yelled. Also: “With all the drinking tonight, someone’s going to jail.”

Stapleton's songs for other artists and for his former band, SteelDrivers, have won and been nominated for awards, so it's strange to think that 2015’s Grammy award-winning Traveller was his solo debut. Singers such as Adele, Kenny Chesney and George Strait have all performed his songs.

Marty Stuart opened for Stapleton.
Mike Brooks
His lyricist background shone throughout the set. His writing is sometimes evocative, at other times pithy. “I couldn’t tell you honey/ I don’t know/ where I’m going/ but I’ve got to go,” he sings in “Traveller.”

His lyrics’ universality may explain some of his wide appeal. “Don’t go looking for the reasons,” he philosophizes in “Broken Halos,” one of the loudest singalongs. “Don’t go asking Jesus why/ We’re not meant to know the answers/ They belong to the by-and-by."

Stapleton’s show was refreshingly free of the overglamorized accoutrement of country’s current biggest pop stars. He traded fancy hair and flashing lights for a stripped-down presentation. That throwback appeal may help him reach a larger audience.

Only three other musicians joined him onstage. It seems to be, as he has said elsewhere, all about the music. Despite his accessibility, SNL appearances and history of rubbing elbows with pop stars, he remains deeply anchored in country. No risk of Swiftian crossovers here.

Stapleton’s voice also sounded as pure and versatile as it does on his albums. His range and twang were on display in “Tennessee Whiskey.” He belted so loudly in “Fire Away” that, without a back wall to hit, the sound simply faded into the wind outside the pavilion. He showed off his virtuosic guitar skills in a rambling solo at the end of “Without Your Love” that he didn’t seem eager to end.

Fans enjoyed the newest track from the unreleased latter half of his latest album, a two-parter titled “Millionaire,” an homage to the economic value of love. Otherwise, he shared few songs from that half of the album, sticking mainly to his hits from Traveller and the first volume of From a Room.

Near the end the night, Stapleton made a major announcement as he introduced his bandmates by riffing on “Tennessee Whiskey.” His wife, Morgane, who played with him onstage, is expecting twins.

"She's the mother of my two kids, and she's about to be the mother of two more," he said. Then he sang almost the entire song directly to her.

Seemingly indefatigable, Stapleton returned enthusiastic for an encore. The night ended with “Sometimes I Cry,” a slow, bluesy piece that induced perhaps his most soulful vocal performance of the night.

Stapleton’s humble nature shone through when he stopped to thank fans. “Thank you for sticking out the cold and for sharing this music with your friends,” he said. “It lets us fill up places like this.”