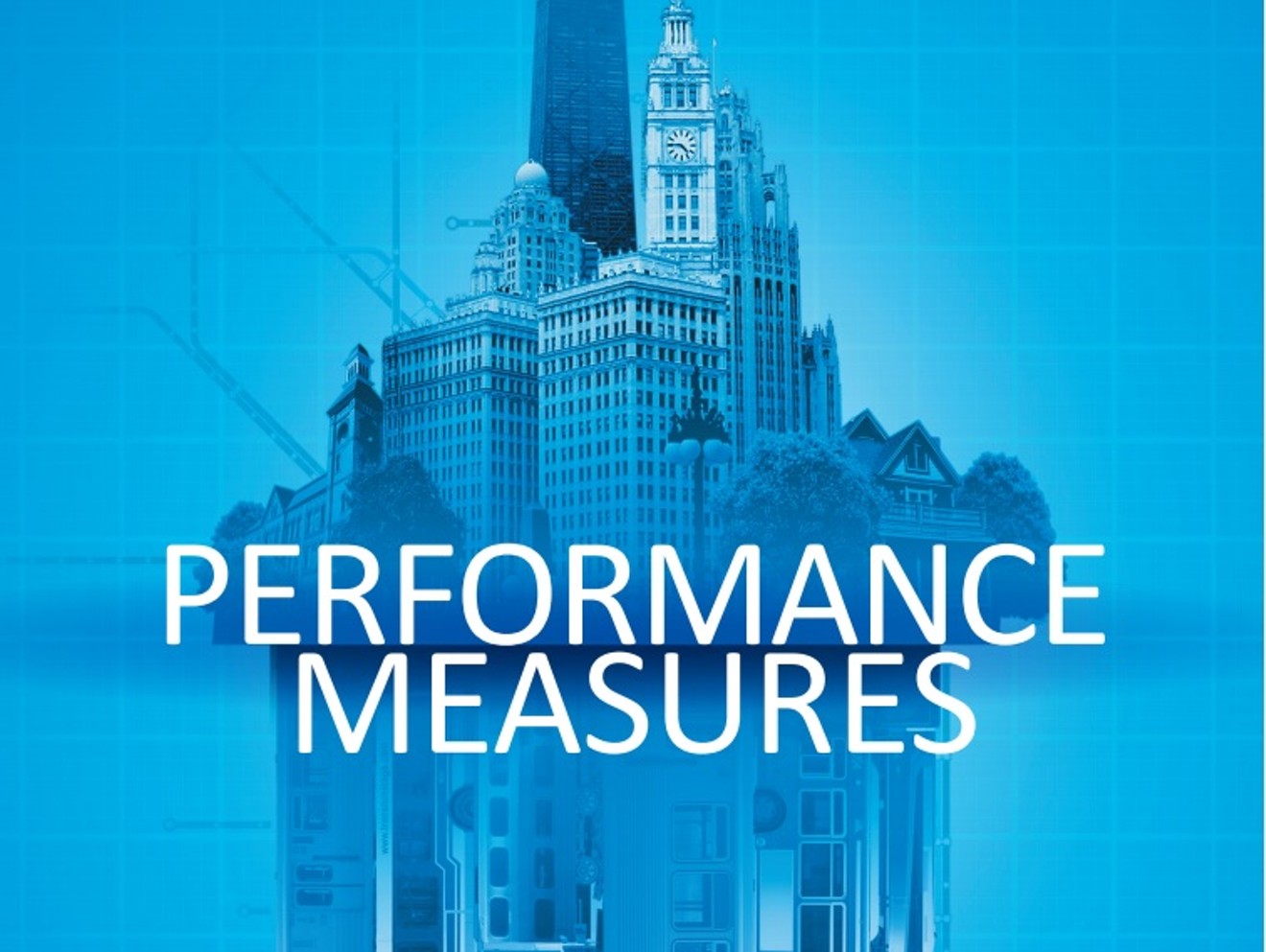 Chicago's Regional Transportation Authority compared mass-transit agencies around the nation in terms of performance and efficiency. In most measures, DART is at the bottom. RTAChicago.org
After five Dallas city appointees to the Dallas Area Rapid Transit board defeated a suburban-backed, billion-dollar borrowing scheme by DART on Tuesday, the usual grumbling and ominous threats of withdrawals of membership in and support for the agency burbled up from the 'burbs. The city, they said, had better do what the suburbs want or they might pull out.

This is like a guy who has already fathered 10 unfed, out-of-wedlock children threatening to pull out. Good idea!

OK, we have talked at some length already about the issue they were voting on Tuesday, so I don’t want to take you on another deep-in-the-weeds tour. It’s about the city not wanting DART to borrow huge sums to build more silly-string rail lines in the burned-out cotton fields of rural North Texas at the expense of downtown, where rail might actually work.

Let’s not do that one again. Let’s talk about something else even more important. Since the founding of DART in 1983, the city has been shackled to the suburbs in the creation of what has become the nation’s dumbest mass-transit system.

Instead of investing money where it could actually make a difference — in the dense, urban core where people might be talked out of their cars — DART has spent billions of tax dollars building a kind of amusement park ride. DART has squandered our resources and our time building a slow-poke, light rail, surface-running system that screws up traffic, takes forever, attracts miserably few riders and, as a result, operates at an ungodly subsidy. Its real purpose has been to serve as an amenity and sales-pitch bauble for suburban apartment developers.

But don’t take my word for it. Since all mass-transit agencies operate on major doses of federal money, various people around the country keep track. Data from The Hamilton Project at the Brookings Institution in Washington shows Dallas — DART — as one of five mass-transit agencies in 2013 whose rail operations were losing more than $4 per passenger ride. 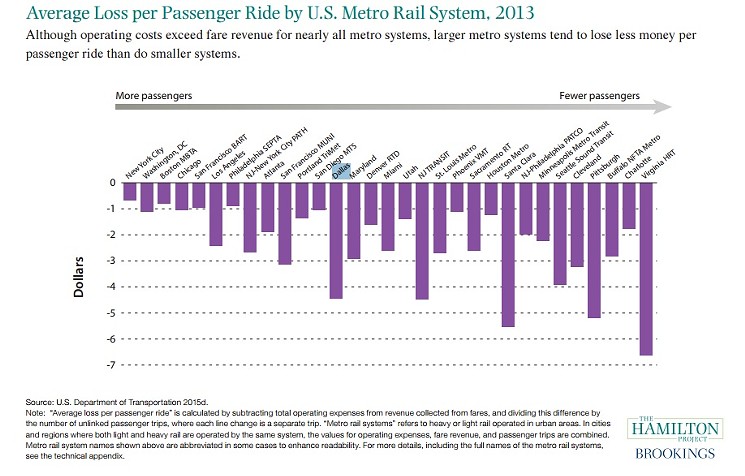 From "Racing Ahead or Falling Behind," Kearney, Hershbein and Nantz
Hamilton Project Brookings

Here is DART’s most recent statement of how much it has to pay in subsidy every time a passenger boards a train or bus — still more than 4 bucks a ride in subsidy for rail.

DART's numbers are unimproved since the Hamilton Project study three years ago.
dart.org
The Chicago Regional Transportation Authority carried out one of the most comprehensive national peer studies of mass-transit systems in 2014-15. Take a look at the numbers to see how DART is doing.

In the Chicago RTA study, DART had the country's worst fare shortfall per passenger trip for bus and rail combined. (The box in the upper right shows Chicago's national rank.) 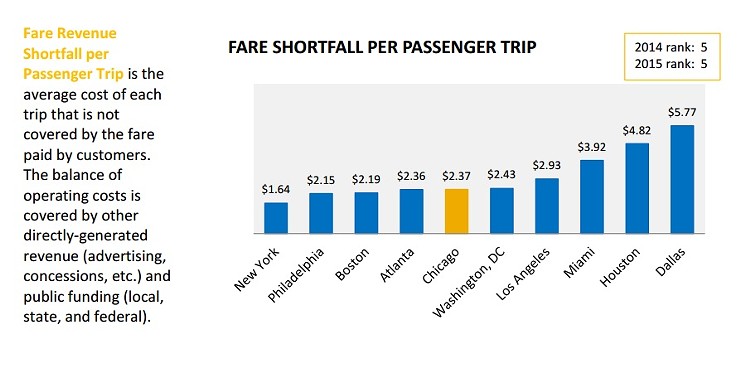 DART had the highest operating cost per passenger trip … 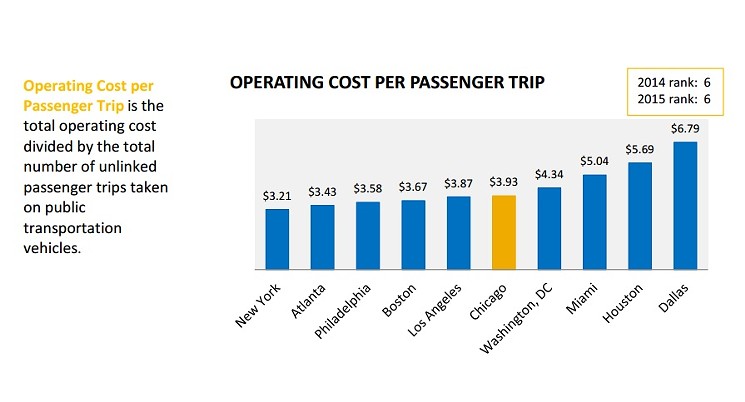 We don't travel cheap.
RTAChicago.org
… and the highest cost per passenger mile.

Our miles cost the most.
RTAChicago.org
DART had the worst record in the country for getting people in its customer base to ride. 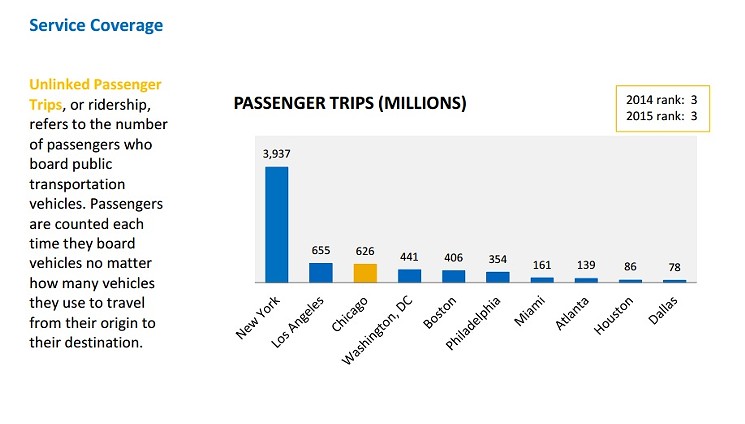 We ride the least.
RTAChicago.org

We're still at the bottom when you look at it per capita.

We go least often.
RTAChicago.org
These are the wages of allowing suburban raw-land real estate developers to design our mass-transit system. The best thing that could happen to the city would be for the suburbs to pull out and leave Dallas to run what’s left — or leave the whole thing high and dry and start over from scratch.

We need a subway downtown. We need frequent buses on a tight grid with bulletproof on-time performance. We need to be able to park our cars for weeks at a time and get everything done by riding buses and trains.

Given the powerful back-to-the-city dynamic of younger people in the last 15 years, nothing could produce a greater bang for the buck in terms of growing the tax base than using DART to enable and complement that already strong market force.

DART, as presently constituted and designed, is a massive failure that sucks up scarce resources we need to spend on smarter things. If DART were a horse, we'd shoot it.