BEST PLACE TO START A REVOLUTION 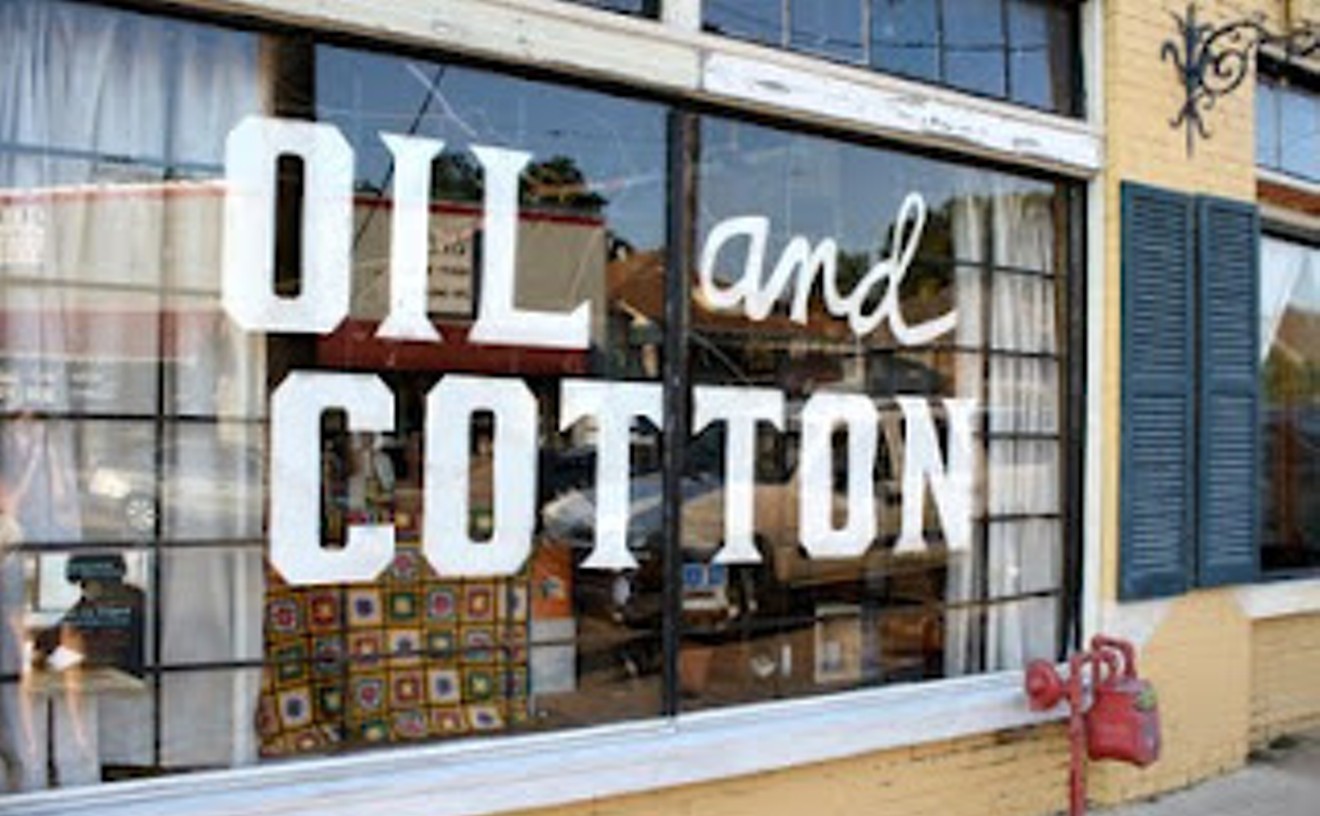 We're not sure how art wizards Shannon Driscoll and Kayli House Cusick do it all. Every day is a new collection of innovative programming, and we're talking really awesome stuff like youth zine camp, memory jugs with Bruce Lee Webb, natural dying classes using native plants or even DIY cocktail tinctures. In their "spare time" this year, they upped the ante and organized the Read-Rite Market — an all-day celebration of text, literature and the art and preservation techniques it fosters. (Seriously, those gals must be tired, but they'd never show it.) It's interesting, this space. Its core mission is to promote arts education and community building, but philosophically it has branched into something bigger. Oil and Cotton has become a hub of idea exchange, a salon for art and a spot where creative passion can find both a home and collaborators. Looking ahead in the boom of Dallas' art scene, we suspect the biggest things to come will be hatched right here.

BEST PLACE TO LEARN EVERYTHING YOU DON'T KNOW

It's really packed in here. Sculptures, collectables, home goods, clothing and mountains of other treasures are stacked throughout the lower level of Pan-African's two-story compound. You want to buy it all, even without knowing its legacy. The philosophical value of these items fills the head of Akwete Tyehimba, the shop's matriarch and sage. Go ahead, ask her about that giant crane statue. She'll smile and recant a moral-rich tale that ends with the mighty bird filling his belly then gathering the strength to soar through the air. She'll explain the African history behind the masks, checkerboards and other rare artifacts. She'll even guide you through the monthly classes and workshops, which unite an entire community with educational programming. But you might need Tyehimba most in the upstairs reading room, where books and videos are methodically organized. And that's where you'll lose hours, poring through texts from people who know much, much more than you.

As Dallas' art scene grows into itself we'll see a lot of youthful blunders. Still, little can be said in defense of the Dallas Contemporary's Internet misstep, when donated works were sold on the DC's eBay account without the artists' consent. Not only was the act disrespectful to the artists, many of whom wouldn't dare sell their work in that way — for any amount — but when the items went online and flipped for a fraction of their worth, the pieces' financial values were tarnished. Worse still was the shell game of blame, as those in top positions quickly accused the lowest-level employees for the error. Only after direct correspondence surfaced revealing director Peter Doroshenko gave the call to sell the work on eBay was a personal apology made at a higher level.

While we know the investment for the Nasher's citywide public art project stretches into the multi-millions, the return's potential is limitless. Dallas art is at an interesting tipping point where arts institutions, artists, others in the creative swarm and city officials have all decided that we are, in fact, doing this thing. The problem with that is that the general public is less motivated because the arts haven't been an active part of their lives until now. Art has been something families would have to plan a day around and pay for, like going to the zoo. Well, that's over. The Nasher's knocked down the zoo walls and sent out 10 specially commissioned pieces of public art by locally and internationally recognized talent into the Dallas wild. From October 19 to February 16, the Nasher presents the largest public art offering ever presented by a museum, anywhere. That means you'll inevitably run into art. You'll see it, Instagram it, tweet it and Facebook it. You'll tag a friend in front of it and by doing so, you'll put art in front of your entire social network. This trickles out. Others seek the piece of art they saw on your feed and soon, art becomes a citywide scavenger hunt in which individuals hunt and interact with artwork outside of the walls of a formal institution. Those acts stick with us. They increase community arts awareness and spur curiosity. The Nasher's Xchange program will be integral to closing the gap between audience demand and art supply.

The DCH is so much nicer than it needs to be. The marquee-bulb-studded facade on Commerce Street houses a world of cheap beers, arguably the best-decorated bathrooms in all of Deep Ellum and a whole host of free open mics and real cheap weekend comedy shows. Drop by Tuesday for the open mics or Wednesday for the equally free improv nights and watch a host of sweaty, nervous would-be comics test out their fledgling material. Sometimes it turns into Snarky Early 20s White Guys Making Dumb Jokes About Their Dicks Night, but not nearly as often as you'd think.

Dang, girl! This flirty little clothing label has swept up top designer wins at all the big contests, and for good reason. We love her commitment to fabric sculpture and her intuitive look at what makes for an interesting shape. Dang is architectural in her approach and ladylike in her execution, an extraordinary combination that leaves women dressed in sophisticated — but not stuffy — attire. Her line brings a refinement level to textile work that's rarely seen in larger markets, so the fact that she's from around these parts is certainly worthy of praise. Looking ahead into her fall/winter line, in which leather and silk blend puckerlessly, it's clear Dang's momentum isn't slowing anytime soon.

The career of one of Dallas' favorite news anchors took an ignominious turn last May, when she was arrested for DWI and summarily canned from NBC 5. She made a heartfelt apology and lived on in her always hilarious, borderline-racy Twitter presence. Then, as we suspected she would, she soon made it back on air, this time as part of WFAA's Good Morning Texas, doing a segment called "Starting Over," an occasionally tear-duct stimulating series on people who have to change directions in life because of unforeseen circumstances. She's still delightfully deranged on Twitter. Keep your head up, Jane.

BEST WAY TO ALMOST LEAP INTO THE CURRENT CENTURY

The Boy Scouts of America

So you're cool with gay Scouts now, Irving-based BSA? But when they turn 18, you boot them out, because gay Scout leaders are somehow beyond the pale? Man, you're so close to not being terrible. Good effort, though. Well, mediocre, actually. Better luck next year.

BEST INSIDE LOOK AT HOW CITY HALL REALLY WORKS

Oh, you thought City Manager Mary Suhm didn't actually run the city? And that City Council members read the stacks of paper put in front of them before voting on things? Bless your heart. The debate over gas drilling on city-owned property pretty much cleared up any lingering delusions about Suhm's place in city government. She secretly signed an agreement in 2007 with a gas drilling company, pledging to help change city policy in order to allow drilling on parkland. Then she (or her staff) snuck a lease into the mix that was not one of the ones the council approved. Suhm blamed the whole thing on a big misunderstanding, and the vast majority of the council quickly made clear that they were totally uninterested in investigating. Instead, the council just declined to let the driller sink its wells on parkland. So things kind of worked, in an ugly, infuriating way.

Duncanville teen Bliss and his 16 miles of glorious silken hair were captured on cell-phone video giving his teacher a scathing lecture about the mountains of boring packets she apparently liked to foist on her students. Whether you thought he was an insightful educational freedom fighter or an entitled little shit, it started an actual conversation about what the nation's schools look like, and how they could better serve our kids. (Apparently Duncanville ISD thought he might have a point too, because his teacher was quickly placed on leave.)