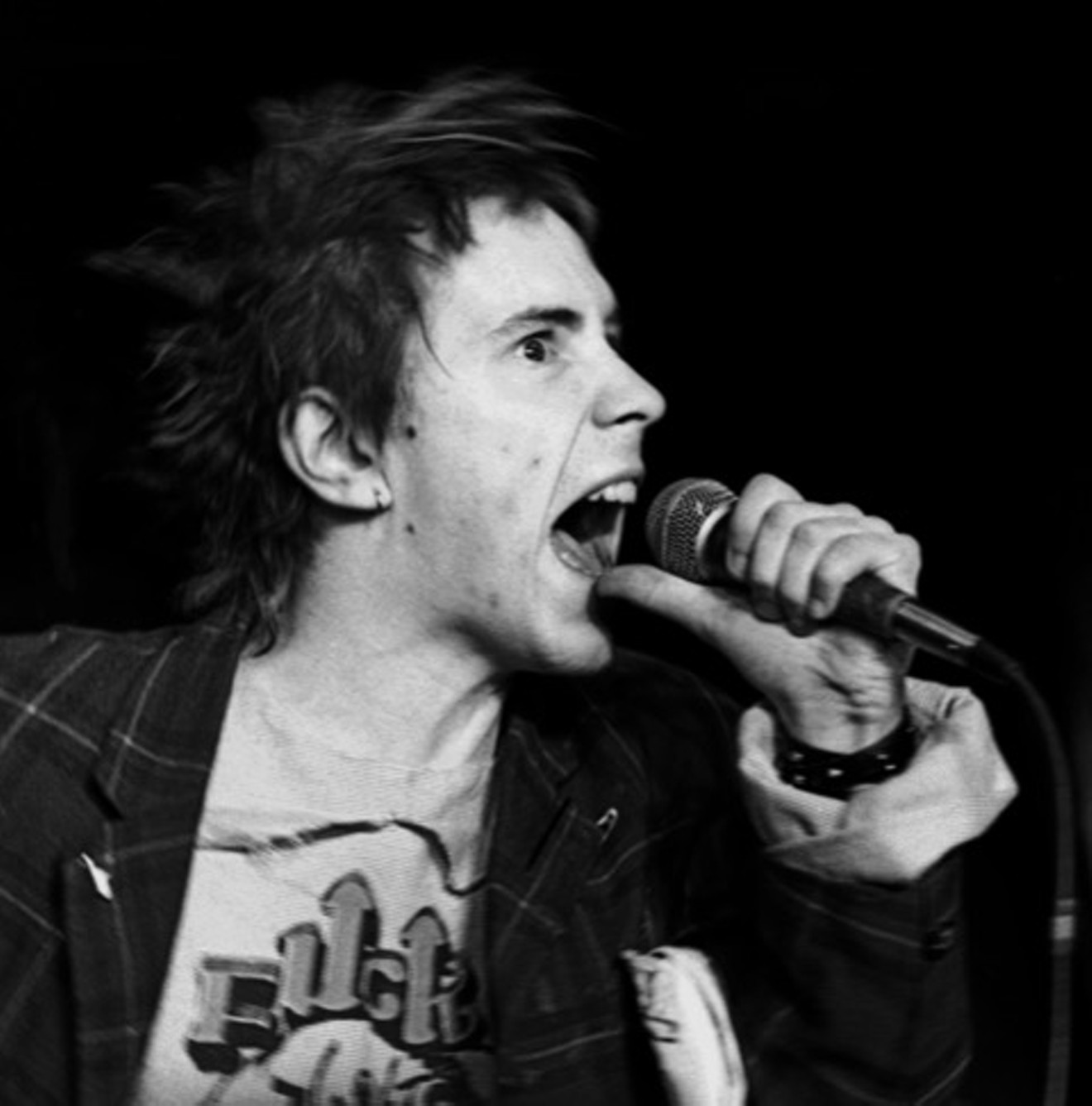 Johnny Rotten fronting the infamously nuts Sex Pistols show at Dallas' Longhorn Ballroom Curtis Smith
On a cold Monday night in January 1978, Dallas got a visit from one of the most iconic and infamous music groups of all time, the Sex Pistols. The marquee read, “Tonight, Sex Pistols” and “Jan. 19 Merle Haggard” as the crowd of ticket holders lined up for the Jan. 10 show at The Longhorn Ballroom.

This week marked the 44th anniversary of the Pistols show, which is still remembered as one of the most noteworthy music events to go down in punk-rock history.

Pistols manager Malcolm McLaren booked the British group to headline the show at the at the old country bar. Playing to a packed and feisty crowd songs such as "Anarchy in the U.K.,” anarchy actually ensued. During their performance, the Pistols ridiculed the audience, resulting in a bloody nose for bassist Sid Vicious. But he continued to play. Some remember the show as a sad embarrassment that angered Pistols fans because of the group’s unruly performance that night.

Rolling Stone noted the 1978 U.S. tour was a mess, that Vicious was addicted to heroin at the time, and frontman Johnny Rotten wasn’t on speaking terms with his bandmates. The group had never been to the U.S. before, but they had been in the national press plenty in the previous year. Instead of booking larger venues and arenas, which they could have easily done, McLaren booked the group at country bars across the South, having journalists cover the 12 days of the tour. Rolling Stone also mentioned that McLaren played up the group's chaos by intentionally booking them at what the publication called "redneck bars" for the tour. 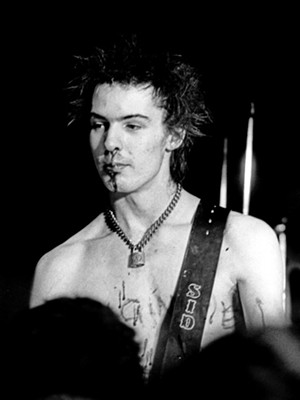 A 17-year-old senior Denton High School student named Curtis Smith was at the Longhorn show with his friends and snuck in his Minolta 85mm 1.7 lens camera, which, he says, he did a few times when attending big-headliner concerts. While dodging security, the teen snapped shots of the event, capturing a bloody-faced Vicious as well the show openers, The Nervebreakers. Detachable lens cameras are not allowed into large concerts and venues without a press pass, which Smith did not have. At the time, Smith was underage along with five of his friends, but they all managed to make their way in.

Now 61, Smith hosts Denton’s Vinyl Revival Hour on KUZU 92.9 FM every Sunday night and still photographs shows around Denton. He's accrued a large collection of photos of famous musicians touring through North Texas and Austin from 1977 to 1982, and they can be found on his Flickr site.

Smith looks back on the night that achieved infamy, the first and last tour for the Pistols until the group’s reunion tour in 1996 — sans Vicious, who died of an overdose in 1979.

Why did you decide to buy tickets and attend the show at the Longhorn Ballroom? What was the appeal?
It was six of us that went to the show and five of us were underage and one guy's older brother went with us. We had heard about the Sex Pistols on the TV show 60 Minutes and had heard “God Save The Queen,” but we went because of the hype. We decided that this was a show that we had to go to.

Was there a punk rock scene in Dallas 44 years ago when The Pistols took the stage at The Longhorn? Was it mainly hippies checking out the show?
click to enlarge 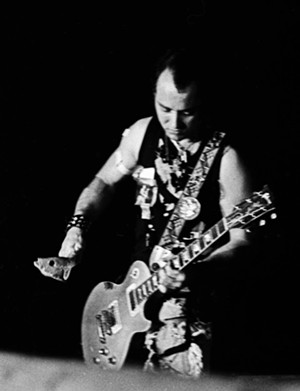 Barry Kooda and his band The Nervebreakers opened for the Sex Pistols at the rowdy January 1978.
Curtis Smith
No, there wasn’t much of a punk rock scene. The Dallas show and the San Francisco show were the only shows that had punk openers. This was when punk really wasn’t playing on the mainstream. If you wanted to discover new bands, then you’d have to read about them in Rolling Stone magazine if they weren’t being played on the radio. There wasn’t a hippie crowd at all. When you went in there was a bunch of old cowboys at the bar that had been there all day drinking and a handful of people dressed in punk rock garb with piercings and hand-painted faces. It was a small handful of people that were into the punk rock scene at the time so there were equal parts them and the drunk cowboys and a crowd of folks there seeing what it was all about, checking out the spectacle, so to speak.

I heard that night was wild, and all sorts of anarchy was going on. I also heard a fish was thrown onto the stage ...
There was a lot of antagonism going on. The band was trying to piss off the crowd and the crowd was giving it back to them. There was a lot of spitting involved. Some guy in a rival punk band threw a dead fish at the openers Neverbreakers' guitarist named Barry Kooda, so he stuck it in his mouth and played the guitar with it. He played in a bunch of different punk bands at the time. His really name is Barry Huebner and he’s still around, he lives in Oak Cliff. I finished off most of my role of film on my camera roll because I shot all those pictures of the fish and only had a few shots left to shoot the Sex Pistols.

How packed was the show and how much were tickets back then?
I’m not sure if it sold out, but the dance floor was filled with people, and it was a bumping and shoving crowd. Tickets were only $3.50 to get in.

Do you think the venue owners of Longhorn Ballroom were prepared for the show?
I heard a story that the owner wasn’t aware of what they were booking. The Sex Pistols manager was specifically going for a shit-show, and they didn’t book any gigs in areas like New York. They were trying to book country-western bars, and they just wanted the confrontation and were trying to stir up that type of crowd.

How did you get your camera through security? Was there much security at the show?
Out of our group that went, a friend’s older brother talked our way in through a side door and that’s how I got my camera in. I had my camera under my jacket, too. Since we snuck through the side door, I’m not sure if there was much security, but there didn’t seem to be any inside. 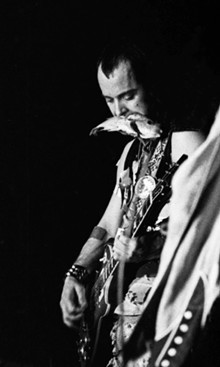 Barry Kooda played with a fish in his mouth — a gift from the audience.
Curtis Smith

How intense was the show? Was it a good time or just a mess like some have said?
It was 45 minutes of serious ugliness. The guys in the band were staring down the crowd. The broken nose incident had different stories. What I think I remember happening was a girl accidentally fell into him and some others said she or one of the other girls that were with her punched him. I heard about the beer bottle incident, but I think it was the girls that either punched him or ran into him. Sid had “Get me a fix” written on his chest in marker. At one point during the show, he took a bottle and smashed his amp with it and that killed his amp and stage volume. Sid must have been going through withdrawals.

The drummer and guitarist were the ones holding it together. [Guitarist] Steve Jones and [drummer] Paul Cook were great, and Johnny Rotten was putting on a great show, but Sid was just out of it.

Do you remember any of the songs the Pistols played or any idea of the setlist? Or was it a bad circus performance?
They played a bunch of stuff off their only album Never Mind the Bollocks, Here's the Sex Pistols and played “Anarchy in the U.K.” but didn’t play “God Save the Queen.” They were angered and shocked that the crowd wanted more so they covered an Iggy Pop song. There’s a bootleg video of the show that night that’s online that’s good, but the sound in the venue was muddy, and you couldn’t hear very well.


Do you remember what the local media or radio stations said about the show the next day?
Channel 8 news had a camera crew there, and they did a story on it that ran the next day on the news. All my friends were on the news being interviewed and are now in all these Sex Pistols documentaries except for me because I didn’t want my parents to see me on the local news, so I hid in the back. On the bootleg video on YouTube you can see me holding up my camera over the crowd.
KEEP THE DALLAS OBSERVER FREE... Since we started the Dallas Observer, it has been defined as the free, independent voice of Dallas, and we'd like to keep it that way. With local media under siege, it's more important than ever for us to rally support behind funding our local journalism. You can help by participating in our "I Support" program, allowing us to keep offering readers access to our incisive coverage of local news, food and culture with no paywalls.
Make a one-time donation today for as little as $1.