So, Is Imagine Dragons Genuinely Terrible or Actually Great? 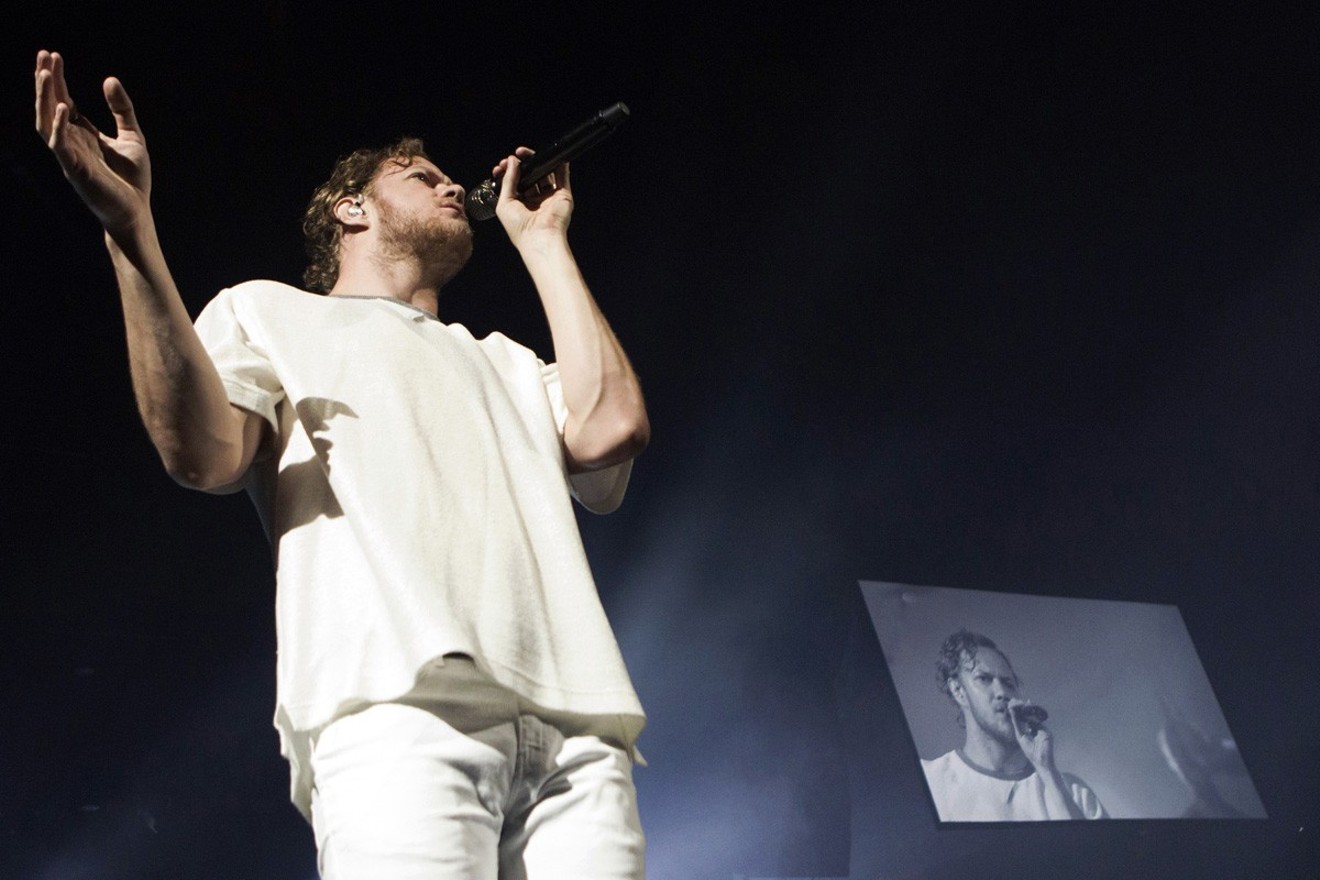 Imagine Dragons changed the musical landscape since its debut in 2010. But is that a good thing? Rachel Parker
In December 2012, the world was supposed to end — at least according to those following the 5,000-plus year Mayan Long Count calendar. In actuality, it was a pretty boring month. Some college students had retired to their homes for the winter break, and those taking winter classes were locked up until the thaw. While many people around the world had a creeping fear of an imminent apocalypse, for some of us the time was synonymous with one thing: Imagine Dragons.

In the post-pandemic pop landscape dominated by TikTok — the MTV of the Zoomer generation — it’s pretty hard to imagine the Las Vegas band as anything other than a pop nuisance, one which has become a thorn in many listeners’ ears. Ask a random bartender with glasses and a beard to describe an Imagine Dragons song and once they’re done rolling their eyes, you'll probably get the following: “Big, dumb, lots of yelling.”

But the idea that Imagine Dragons was once an interesting group, even one worth seeking out amongst the noisy pop landscape, seems unbelievable, but it is true: Imagine Dragons were once interesting. The strange thing is, they haven’t really changed stylistically all that much.

In the waning months of 2012, as “Gangnam Style” mania was wearing off and Bruno Mars was proving he was not a one-and-done artist, a strange song was climbing up the charts called “It’s Time” by a peculiarly named band called Imagine Dragons. Frankly, there was no song on the airwaves in 2012 or then-recent memory that resembled “It’s Time.”

The only thing as remotely oblique was a moody, nautical electronic rock ballad called “Sail” by a one-man band called Awolnation that had yet to find its way onto the charts. Incidentally, Awolnation’s theater tour in 2012 had Imagine Dragons as the opener. Imagine them dragons, indeed.

“It’s Time” was (and still is) radio schlock, but at the time it felt original. This is the age of peak Maroon 5 and the edge of the age of divas Ke$ha, Lady Gaga and P!nk, who were in platinum form. Meanwhile, Taylor Swift had just made her first full step into the pop world with a Max Martin-produced track called “We Are Never Ever Getting Back Together.” It may have been a wash, but the perceived uniqueness of “It’s Time” was worth investigating the group that spawned it.

For many college students whose music tastes were changing with the times, out of the butt rock and emo-dominated 2000s into the melting pot and hip-hop-frenzied 2010s, Imagine Dragons’ legitimate, ultra-schlocky arena-pop-hop-indie-electronic-rock was a source of musical stimulation. These were the dark ages before streaming.

In the following 12 months, the music landscape was to undergo one of its most radical changes and Imagine Dragons were destined to be in the thick of it. In 2013, the meme of dubstep was waning and butt rock was losing steam, sleeping giants Daft Punk opened a Pandora's box of nostalgic possibilities with their blockbuster album Random Access Memories, Kanye West’s musical madness was on full display with his polarizing album Yeezus, a foam-finger-waving Miley Cyrus ignited an outcry of public indecency almost unthinkable now in a post-“WAP” world, and a 17-year-old girl from New Zealand named Lorde almost single-handedly ended the era of the bombastic diva with a three-minute condemnation of the pop music oligarchy called “Royals.”

Where was Imagine Dragons in all this? They technically had the biggest hit of the year. The second single from album Night Visions was a seven-headed genre hydra called “Radioactive” that combined dub-step wub wubs with gargantuan drum beats, cryptic lyrics about reawakening, and a chorus that would soon define Imagine Dragons’ MO: lots of shouting. The song slowly crawled to the upper echelons of the Billboard Hot 100, peaking at No. 3 behind Robin Thicke’s (in retrospect) disgusting juggernaut “Blurred Lines” and “Miley Cyrus’ "We Can’t Stop.”

The thing is, “Radioactive” was not just a giant hit, it remains one of the biggest hits in pop music history. From its chart debut in September of 2012, “Radioactive” stayed on the charts for a whopping 87 weeks, finally falling off in June 2014. This longevity made it the longest hit in Billboard history until it was finally bested in September 2021 when The Weeknd’s “Blinding Lights” stuck around for 90 weeks.

Now, when we say the band was “interesting,” we're not also saying “good.” Even at the time, Imagine Dragons had its detractors. Jon Dolan of Rolling Stone called “Radioactive” “a droll moaner that sound[s] like Chris Martin writing an Eminem ballad about the end of the world.”

When Imagine Dragons announced their sophomore album in 2015, I’ll admit I was suckered in, like Taggert riding into the fake Rock Ridge in Blazing Saddles. I made it a point to invest in the future by purchasing the album on vinyl, as I wanted to be on the right side of history. If only Morgan Freeman had said in a voiceover, “Boy, would he be wrong.”

By 2015, Imagine Dragons were no longer the only group doing the electro-rock boogie, as Walk The Moon and X Ambassadors both had smash hits with various shades of the Imagine Dragons palette, Fall Out Boy was incorporating the Dragons’ production slather into their own comeback. Panic! At the Disco was about a year away from doing it correctly. The folk-rock boom of 2012 was long dead, after being won by The Lumineers’ subtle charm and lost by Mumford and Sons’ decision to go electric.

Imagine Dragons’ unique aesthetic was no longer their strong suit. They would have to get by solely on hooks.

In a move that, honestly, should be praised retrospectively, Imagine Dragons attempted to diversify their already diverse sound on their sophomore album Smoke & Mirrors. The title seemed appropriate, as the band’s lack of songwriting chops was adequately disguised by their ambitious production (solely in a pop sense, they’re no King Crimson).

The album opens with what may be the definitive Imagine Dragons song, “Shots,” a manifesto of everything that made them noteworthy in 2012 while smoothing out their more abrasive qualities. Elsewhere on the album they fall victim to their own eccentricity. “Gold” starts out promisingly with a glitchy sample, Latin groove and sexy spaghetti Western whistle before the song kneecaps itself and discards its groove.

“I’m So Sorry” has a sweet hook but collapses under its own weight and feels like it was solely written to soundtrack a Call of Duty trailer. “It Comes Back to You” is a mellow deep cut that slightly resembles a cross between “Amsterdam” from Night Visions and Wang Chung’s “Dance Hall Days.” Other than that, the album is a mess.

After the perceived failure of Smoke & Mirrors, the band cranked up the hooks, but by that point it was too late. They were just another slick pop group riding a wave of vaguely inspirational gobbledygook. The hits kept coming but the respect dried up. Imagine Dragons had officially become the Nickelback of the 2010s.

They were just another slick pop group riding a wave of vaguely inspirational gobbledygook. The hits kept coming but the respect dried up. Imagine Dragons had officially become the Nickelback of the 2010s.


Now on their fifth (or sixth, if you count the two acts of the just-released Mercury album to be separate) album, the band has no shortage of Billboard Hot 100 hits, but few, if any, still talk about Imagine Dragons as anything other than chart fodder.

While the "inspirational" qualities present in Imagine Dragons’ music is occasionally called eye-roll worthy by many of their critics, the band has embarked on several philanthropic endeavors that are, to say the least, noble. Inspired by a young fan who succumbed to cancer in the early stages of the band’s career, Imagine Dragons started the Tyler Robinson Foundation to help young people battling cancer, and frontman Dan Reynolds recently found himself at the center of a documentary called Believer, focusing on the Mormon church’s controversial stance on homosexuality.

While Reynolds himself is not homosexual, and has distanced himself from his Mormon upbringing, he has contributed to several LQBTQ+ charities and even organized the LOVELOUD music festival in Orem, Utah in support of LGBTQ+ youth.

Imagine Dragons are quite possibly the modern-day version of the band Chicago. Both started out as attention-grabbing and legitimately original, but quickly devolved into schlock galore, eventually becoming one of the most ridiculed bands of their time a decade into their career, despite the hits that keep on coming.

And like Chicago, Imagine Dragons’ impact is undeniable. The streaming age of genre-blending "alternative" acts such as Glass Animals and The Kid LAROI would be unimaginable without Imagine Dragons. Perhaps there will come a day when Imagine Dragons, much like similarly critically derided yet audience-adored artists like Queen and Journey, will be discovered by a new generation whose ears have never heard anything like it amongst the sea of whatever they’re listening to.

Look out, millennials, your grandkids are going to come up to you one day and ask about a band called Imagine Dragons — and who knows how you’ll feel then?
KEEP THE DALLAS OBSERVER FREE... Since we started the Dallas Observer, it has been defined as the free, independent voice of Dallas, and we'd like to keep it that way. With local media under siege, it's more important than ever for us to rally support behind funding our local journalism. You can help by participating in our "I Support" program, allowing us to keep offering readers access to our incisive coverage of local news, food and culture with no paywalls.
Make a one-time donation today for as little as $1.