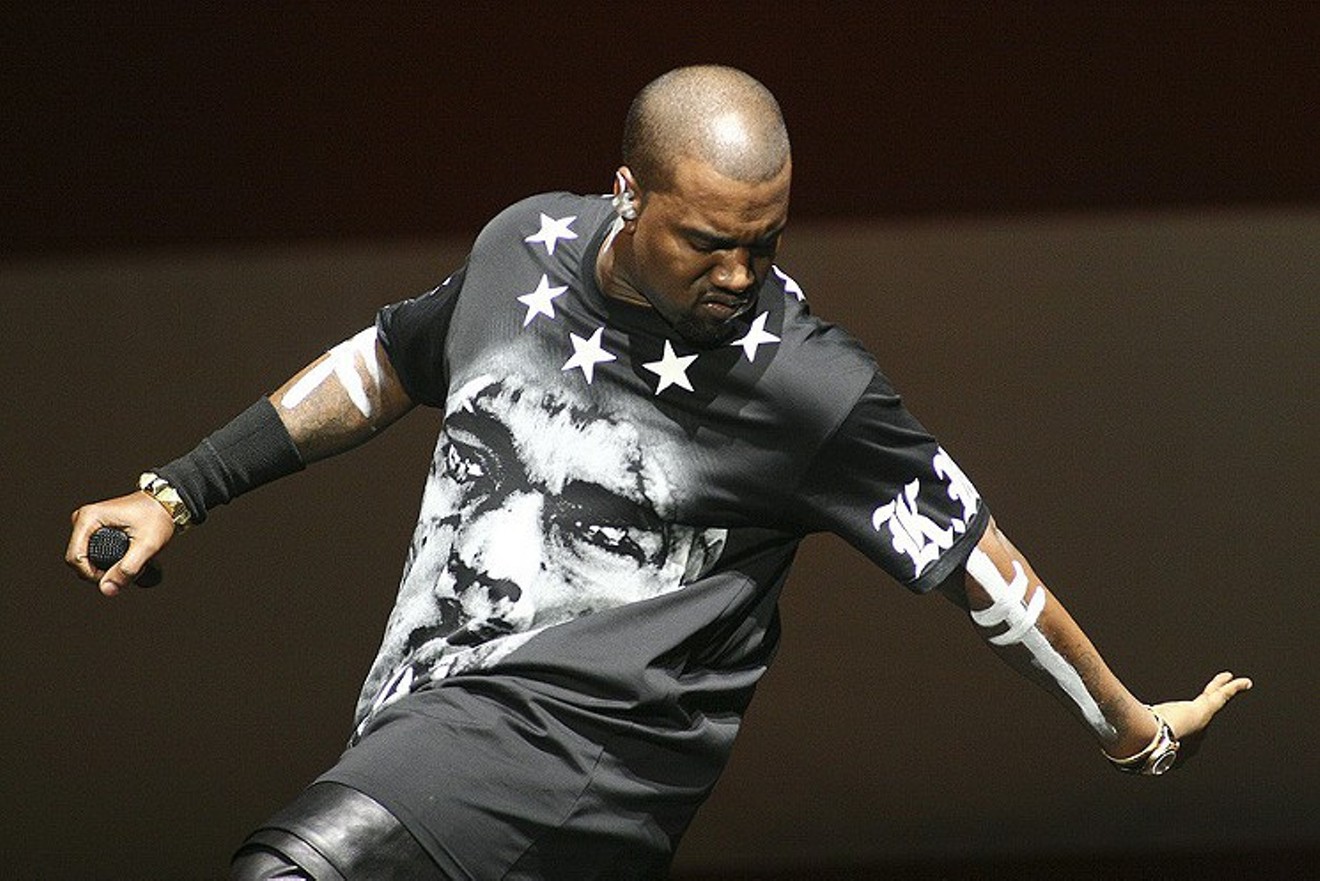 Some of Kanye's lyrics have us reaching for some wine to go with that cheese. Chris Victorio

In the spirit of our “Top 10 Best Songs by Really Bad Artists” piece that ran earlier this week, we thought it was only fair to point out that some indubitably fantastic artists also have songs that are rather terrible.

Yes, it happens to the best of us, and as our human condition dictates, we are prone to error. Somehow a lineup that masqueraded as The Velvet Underground was allowed to release an album as terrible as Squeeze. Somehow Celtic Frost saw fit to abandon a completely revolutionary metal blueprint and pursue a hair metal sound with the album Cold Lake. In 2010, Lil Wayne decided to pick up a guitar, and it resulted in the complete monstrosity that was Rebirth.

We’re talking entire albums here. So it should go without saying that finding 10 horrible songs by otherwise revered artists should be a cake walk. Even then, we gave it careful consideration, and this is our verdict:

Bob Dylan, “Wiggle Wiggle”
Seriously, how does a Nobel Prize-winning poet and folk legend who wrote timeless masterpieces like “Desolation Row” and “Idiot Wind” pen lyrics like, “Wiggle, wiggle, wiggle like a bowl of soup”? There are, sadly, a wide variety of clunkers to choose from in Bob Dylan’s discography, but this takes the cake for being the laziest and corniest.

My Chemical Romance, “Desolation Row”
Speaking of “Desolation Row,” My Chemical Romance should not have been allowed to touch it, but quite tragically, they did. What made the original so great was the fact that its bare-boned acoustic instrumentation provided a contrast to the rest of the heaviness that preceded it on Highway 61 Revisited. Not only does My Chemical Romance’s version completely take away that context, but they only picked the first two verses and followed them up with the “At midnight, all the agents” passage to make it pertinent to The Watchmen. As underrated as that movie is, the producers should not have commissioned this abortion of a cover.


Billy Joel, “We Didn’t Start the Fire”
Billy Joel is somehow the only artist that can make it on both this list and the “Top 10 Best Songs by Really Bad Artists” list. It’s quite impressive, actually. Joel at least admitted that Attila was a rudimentary band, and it was a youthful blunder that lasted only one year. There’s honor in owning up to that, but let’s not pretend he doesn’t have terrible songs within his solo discography. The worst of these is actually one of his most celebrated: “We Didn’t Start the Fire.” The instrumentation is subpar, and the boomer fetishism is completely nauseating. But since we’re in Dallas, it’s only fair that we address the lyrics, “JFK, blown away, what else do I have to say?” Well, Billy Joel, you could say, “Sorry for coming out with this terrible song. I’ll play ‘Zanzibar’ at every show from now on.” Just a thought.

Le Tigre, “I’m With Her”
It’s good that Kathleen Hanna decided to reunite Bikini Kill, because 1. Pussy Whipped is one of the greatest punk albums of all time, and 2. Le Tigre somehow managed to take a steep nosedive into rock bottom when they recorded the pro-Hillary Clinton song, “I’m With Her.” Yes, we’ve criticized pro-Trump music in the past, but crappy artistry is nonpartisan, and this song proves it. The lyrics are wholesale cornballs, and listening to this obnoxious song gets even worse once you come to the horrifying realization that there’s 4½ minutes of it. That’s time you could spend listening to three Bikini Kill songs, which would be a far better choice.


Ministry, “99%”
You have to hand it to Al Jourgensen: Somehow, he was able to repeatedly shout that cringeworthy “1-2-3-4-5-6-7-8-99%” chant with a straight face. This Occupy Wall Street-inspired single is undoubtedly the worst song in Ministry’s entire discography, and this is coming from one of the few people that actually enjoyed Filth Pig.
Kanye West, “Closed On Sunday”
Unabashed corniness is part of Kanye West’s charm, but that was back when he spat bars like, “The way Kathie Lee needed Regis, that’s the way I need Jesus.” To that point, West actually expressed religious conviction in a compelling manner on The College Dropout with that song (“Jesus Walks”) and an interlude of Albert E. Brumley’s “I’ll Fly Away.” So no, we don’t hate the song “Closed on Sunday” because of its Christian theme. We hate it because West somehow harnesses the gravitas to be preachy while, in the same breath, dropping lines like, “Closed on Sunday, you my Chick-fil-A / You’re my number one, with a lemonade.” Warning: The song will make you doubt your faith, but the video will turn you into a devil worshiper.

Taylor Swift, “Look What You Made Me Do”
That “I’m sorry, the old Taylor can’t come to the phone right now / Why? / Oh, 'cause she’s dead” passage will give your jaw cramps because of how cringeworthy it is. Think about it; what person would call and say, “Hey, may I speak with the old Taylor?” Moreover, it’s extremely rude to reply with “Why?” after being told that someone can’t come to the phone. When that happens, you leave a message like a normal person. Has Swift ever made a phone call?

The Beach Boys, “Kokomo”
If you listen closely to “Kokomo,” you can hear the sound of Mike Love cashing a check he received for his Full House cameos as he blissfully sullies the Beach Boys name. What, did you think that was the sound of the beach?


LL Cool J, “Accidental Racist (ft. Brad Paisley)”
OK, so Brad Paisley is the lead artist for “Accidental Racist,” but it’s still soul-crushing that LL Cool J, one of hip-hop’s most essential artists, decided to contribute a verse in which he tries to reach an understanding with a Confederate-flag-T-wearing Paisley, who insists he was only sporting it because he loves Lynyrd Skynyrd. And don’t you worry, because by the time the song reaches its conclusion, Paisley and the GOAT single-handedly eradicate racism and pat each other on the back for it.


Weezer, “Can’t Stop Partying”
No, we don’t expect Weezer to go back to the glory days of The Blue Album and Pinkerton, but the production of “Can’t Stop Partying” is diabetically saccharine. That description actually applies to every other song on Raditude, but at least “(If You’re Wondering if I Want You To) I Want You To” makes you feel warm and fuzzy inside. “Can’t Stop Partying” turns that warmth and fuzziness into complete nausea, and not even with Lil Wayne’s verse is there any musical Zofran to counter it.