Who could hate Babymetal? Mike Brooks
For those of you still without YouTube access, Babymetal is an act from Japan that overlays a teenage J-pop girl band on top of a heavy-metal base. If everything in life has its opposite, then this is about as divergent as it gets. Both the group and the performance are manufactured, choreographed and rehearsed. For some metal heads especially, this immediately brands the band as a fake.

In May, after Rob Zombie posted a photo with the band on his Facebook page, his fans weren't pleased and left comments the like of: “Babymetal is a shameful embarrassment to anything metal. Their (alleged) music make [sic] me want to kill things.”

To which Zombie replied:  “Hey, they are nice kids out on the road touring. What are you doing besides being a grumpy old fuck?"

Thank you Rob, that captures it perfectly. Babymetal played the South Side Ballroom on Tuesday night, but to properly review them, we need to start 5,000 years earlier with the forces of yin and yang. Yin is the force primarily associated with cold, darkness and evil. Yang is the opposite: warmth and light.

Since its inception, metal music has been heavily weighted toward the yin. The lyrics take us to our darkest spaces. The symbols of fire and destruction reinforce the aesthetic. Participants in this musical black mass salute each other with the devil’s horns. And for some grumpy old fucks, metal has become the sludgy soundtrack of their lives.

Philosophers understand that this is an unnatural and undesirable state. All that yin needs some yang. Even a grumpy old fuck like Karl Marx preached the principles of dialectic. Everything has its opposite, and it is the conflict of opposites that creates something new. In Marx’s case it was political and economic revolution. When it comes to metal music, it is … Babymetal?

“They are awful. This is lame. I love you Rob, but shame on you,” said another commenter.

“They roll harder than you,” Zombie replied.

We can (and probably will) argue over their bona fide metal-ness for hours, but one thing is clear: Babymetal is entertainment of the highest order. At their Tuesday show, a masked backing band of professional session players ripped through the music with precision. There was no slop, no power stance solos, no showy changes in meter. Theirs is metal built as dance music. Su-metal and Moametal (joined by a rotating replacement for Yuimetal) were a nonstop triangle of dance and pose, with the edges parting for Su-metal’s lead vocals and then closing ranks for another round of Pokémon dance moves. The words are 99% in Japanese, but folks sing along anyway. We all believed we were saying nice things about each other, but as far as I know, could have just agreed to a pact with Satan.

Babymetal has both inspired and been informed by video games, anime and cosplay. As pioneers of the kawaii (cute) metal genre, they manage to stay safely cute, even in their punk Lolita outfits. There is no Miley Cyrus twerking, but there are a lot of batting eyes and squeaky voices.

The stage production was beyond spartan. Other than a line of musicians in the back, there was nothing but open space, carefully swept before the girls came out. This puts even more pressure on the three young ladies to hold the audience, and they pulled it off with an endurance that would make a fitness coach envious.

Opening the night was Avatar, a Swedish band also known for their theatrical presentation. They too have taken their share of criticism for putting style over substance. But at this point in their careers, they have developed a solid sound that can stand on its own, and their set was a great fit. The photographers especially appreciated the visual effort.

Is Babymetal the future of metal music? Probably not. They are genuinely sweet, but you can’t get all your music calories from sweets. On the other hand, it’s not healthy to stomp around all day with your Viking sword and greasy beard, gnawing on the leg of some recently killed animal. Lighten up, and have a treat once in a while, you grumpy old fucks. Horns up for Babymetal.
click to enlarge 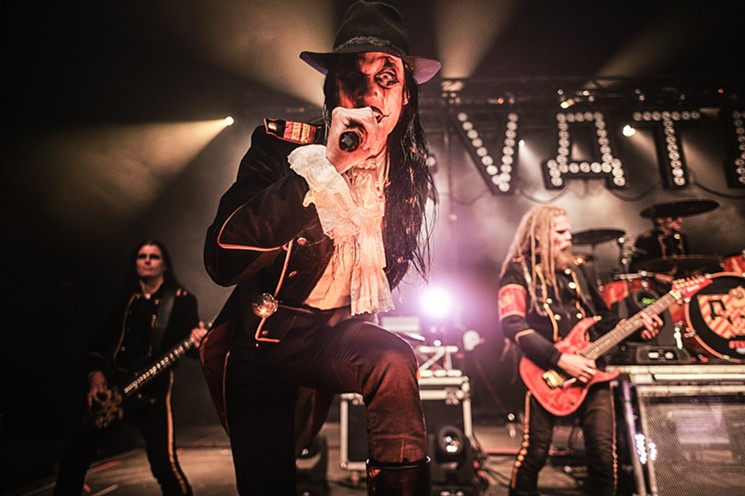 Avatar opened for Babymetal on Tuesday in Dallas.
Mike Brooks Awwwww! Babymetal's blend of searing metal tinged with J-pop is unabashedly cute.
Mike Brooks
KEEP THE DALLAS OBSERVER FREE... Since we started the Dallas Observer, it has been defined as the free, independent voice of Dallas, and we'd like to keep it that way. With local media under siege, it's more important than ever for us to rally support behind funding our local journalism. You can help by participating in our "I Support" program, allowing us to keep offering readers access to our incisive coverage of local news, food and culture with no paywalls.
Make a one-time donation today for as little as $1.
Mike Brooks