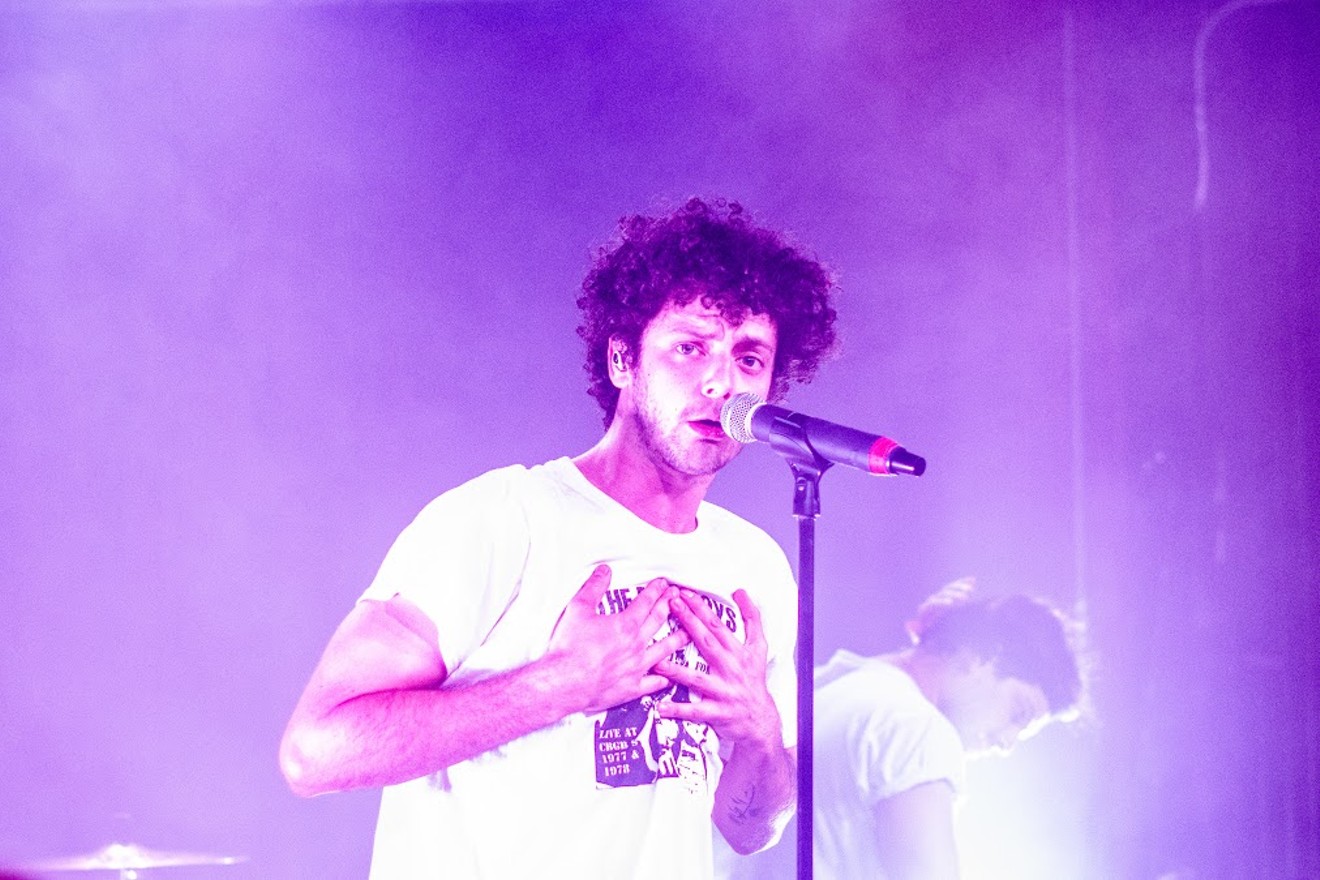 Grandson performed at Club Dada on Wednesday night. Carly May
The lion’s share of songs Grandson (born Jordan Benjamin) performed Wednesday night at Club Dada followed a strict formula. Begin with a fast-tempo hip-hop verse, slow it down during the bridge and come in full-force with a bombastic, headbanging chorus, minus rapping. Granted, there are some slight deviations from this rule, with songs such as “Best Friends,” but that formula was consistent throughout a large chunk of the set list and grew more predictable throughout the show.

Unpredictable, however, was the flow Benjamin took on whenever he rapped. He didn’t seem to convey a consistent identity when it came to spitting bars, as the flow was different with each song. Despite this, there were some highlights. In the song “Despicable,” his rapping was surprisingly articulate and smooth, and in “Fallin’ (Temptation),” he steered a bit into Aesop Rock territory in a rather tasteful manner.

At times, Benjamin just sounded like Macklemore, and this quality worsened as his lyrics turned toward politics. He is no doubt sincere in his political activism (there was a voter registration drive happening on Dada’s patio stage throughout the night), and credit is due for Benjamin courageously taking a Scrooge McDuck dive into controversial subjects, but his lyrics came across as though he were desperate to be profound. He wasn't.

The perfect example of this is the post-Parkland song “Thoughts and Prayers,” in which Benjamin says, “Fear’s good for profit / deregulate the casket / they’re lyin’ to the masses.” What does “deregulate the casket” even mean? Are the mortician and funeral director lobbies trying to persuade Congress to deregulate them?

Benjamin raps through this cut with a flow sounding so identical to Zack de la Rocha’s that it removed any suspicion that he listened to Rage Against the Machine as inspiration. His views on Parkland are admirable, as is his attempt to emulate the political rap-metal outfit. But when de la Rocha expresses his opinion in song, he does it with some poetic bite and unbridled fury. If Benjamin hones his lyrical chops and enhances his delivery, he might be great one day, but what he delivered Wednesday night was stale.


If Benjamin hones his lyrical chops and enhances his delivery, his future output has potential to be great, but in the form in which it was delivered Wednesday night, it was stale.


That's unfortunate, because Benjamin is somebody to root for. He’s a young artist who is humbled by his rise to stardom. The expressions of gratitude he made to the audience seemed sincere, and he and his band brought an energy and stage presence that was engaging.

Benjamin bantered with the audience throughout the night, but was so insistent on being politically charged and inspirational, it came off as preachy and sappy. Not a shred of comic relief was tossed in. Every time he spoke to the audience, he was either trying to channel Tony Robbins or Eugene V. Debs, and he wasn’t proficient enough at it to justify his excesses.

Grandson’s hourlong set ended on a high note, however, as he closed with his two biggest hits, “Apologize” and “Blood//Water.” The former engages in this painfully cliché lyricism that one would probably find in a Creed song: “Never been a perfect soul / but I will not apologize / Been a lot of places in this life / and I did a lot of wrong I can’t make right.”

The latter isn't something to compare to Leonard Cohen’s works, but it was a vast improvement lyrically. The bass drop was a bit gushing, but of all the songs he performed, that one was a highlight. That said, the bar for what constitutes a highlight was so low that even inspiring a feeling of indifference was a positive.

It's painful to say that the set just left a bad taste in the mouth. Benjamin seems like a nice person, and for that reason, an unrelenting review with zingers would be unwarranted. But the negatives far outweighed the positives at his Dada show. His songs noticeably adhered to a strict formula so hard that the formula overstayed its welcome. His flows were so inconsistent that it was hard to pinpoint a concrete sense of identity through them. His political and inspirational messages came off as preachy and mawkish.

Beneath it all is a gifted artist with potential to perfect his craft, and having just two albums under his belt, he’ll do it or will die trying. If he does die trying, hopefully his casket won’t be deregulated.
KEEP THE DALLAS OBSERVER FREE... Since we started the Dallas Observer, it has been defined as the free, independent voice of Dallas, and we'd like to keep it that way. With local media under siege, it's more important than ever for us to rally support behind funding our local journalism. You can help by participating in our "I Support" program, allowing us to keep offering readers access to our incisive coverage of local news, food and culture with no paywalls.
Make a one-time donation today for as little as $1.