Rainbow Kitten Surprise Is a Religious Experience — Literally, Every Song References the Bible 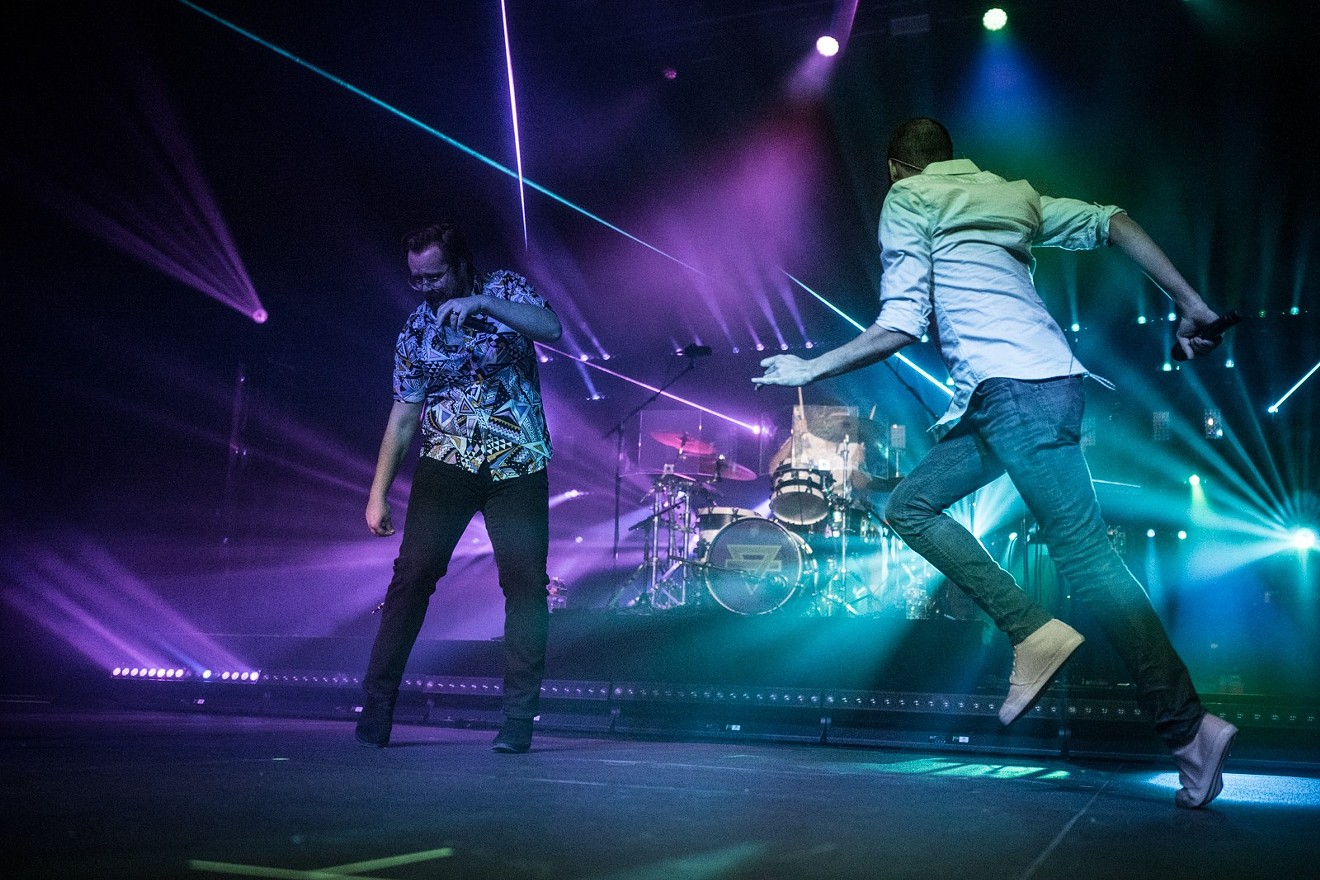 Rainbow Kitten Surprise is everything you want in both a band name and a live show. It's a religious experience. We say that 99 percent literally, because if you do an actual analysis of their lyrics, you'll notice subtle and not-so-subtle Bible references that go way deeper than "Cocaine Jesus." Everything from manna and Canaan to St. Peter and 40 days and 40 nights is referenced. As lead singer Sam Melo spent most of his childhood in the Caribbean islands with his missionary parents, writing songs with Old Testament allusions likely comes natural.

At 8 p.m. Friday night, a line of RKS fans wrapped around The Bomb Factory. Hoards made up of mostly 20- and 30-something white people dressed in their rock show-best is expected, but the amount that some of them paid to be there was not.

Tickets for the Friend Love Freefall Tour went on sale last October for a modest $30, but in the weeks leading up to the sold-out show, they were reselling for a cool $300 (and yes, we have the receipts to prove it). It's hard to imagine an indie/alternative/folk rock show as expensive as a Beyoncé floor seat ticket, but it's clear RKS had reason to support an even bigger venue selection than the 4,300-capacity Bomb Factory. 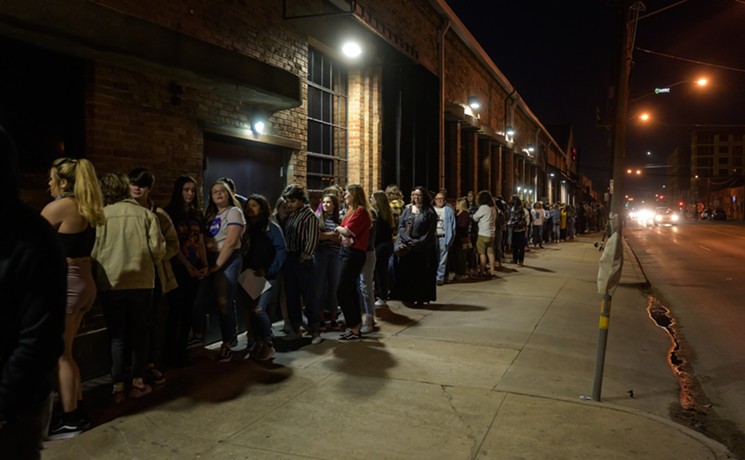 Mike Brooks
The show started fashionably late at 8:40 and the crowd responded well to opening act Mt. Joy. This is really no surprise — the band’s look and sound are strikingly similar to RKS in both its peppy folk harmonies and religiously imaginative lyrics, like “Jesus drives an Astrovan.”

After an hour of solid momentum built by Mt. Joy, RKS started its show with "Matchbox," a tame and somewhat skip-able song from their latest album, How to: Friend, Love, Freefall.

"Holy War" specifically mentions Dallas, and Melo did not miss the opportunity to sing the line with extra oomph. The track "It's Called: Freefall" had everyone belting, "You can let it all go," as one resounding band, but energy really picked up when drums played the familiar first few beats of arguably the most notable song from their Freefall album: "Hide."

With the innocent addition of a few male pronouns, “Hide” not only acted as Melo's coming out last April, but became somewhat of a LGBTQ anthem throughout 2018 with the music video's release, featuring drag queens.

The classic RKS songs met all live-show expectations. "Devil Like Me," "Cocaine Jesus" and "First Class" embodied the RKS live experience: entrancing, colorful lights that don't stop at the stage but engulf the whole interior of the building like some holograph transformer; distinct, high-pitched sweeping vocals that sound too good to be live; and those signature off-the-wall jumping, spinning dance moves that only a dance major like Melo could invent.

Lights, talent and moves may be concert staples for all genres, but there's something about how it all comes together in an RKS show. RKS is fun to watch because they're talented without trying. It’s so natural. The moves aren't choreographed. The harmonizing vocals aren't masterfully trained. It feels like the band that played for us in 2019 is just a slightly older version of the one that formed in the Appalachian State University dorms in 2013.

They have that signature rock attitude of caring about the music more than success but with a glittery, whimsical spin that's secure enough in its manhood and band-hood to literally name themselves Rainbow Kitten Surprise (a name that came as more of a joke from a sick friend in the hospital). This is the energy that keeps repeat ticket purchasers coming back. 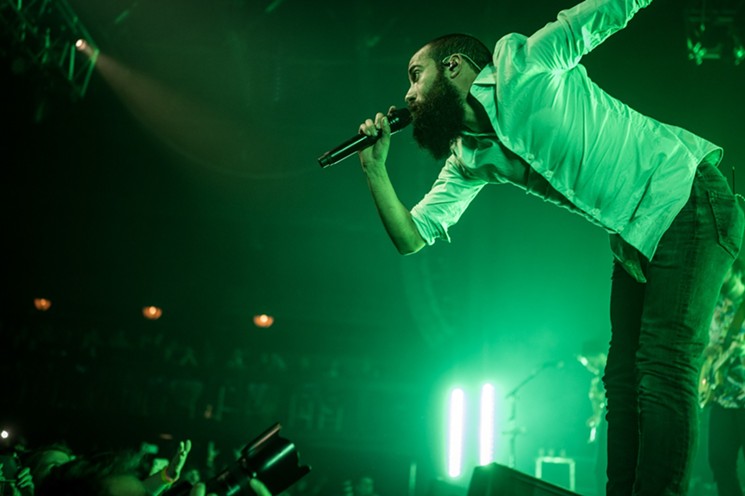 Mike Brooks
While every song was performed to perfection, we can't help but feel a little let down by set list decisions. The 20-song Freefall Tour left out fan favorites from their first two independent albums, RKS and Seven + Mary. "Lady Lie," "Hey Pretty Momma," "Goodnight Chicago" and "Cold Love" were cut, just to name a few.

Despite not letting us sing about killing a man and taking his place (ahem, "Goodnight Chicago"), they sneaked in one of their popular, but unreleased songs, "No Vacancy,” and even surprised and delighted us with a couple of new songs.

At about 10:45 p.m., RKS announced the final song of the night, "That's My Shit," an upbeat, rap-like song from their first album. After a brief exit, the band was cheered back on and began their encore with “Fever Pitch.”

In the middle of encore bliss, Melo made a comment that left us questioning ourselves: "Everything's bigger in Texas? Bullshit, do ya mind? If you really don't mind, then turn the fuck up please," Melo commanded and urged the Dallas crowd to be louder after singing "Recktify."

Doth RKS-obsessed ears deceive us? How is it possible our sold-out audience wasn't being loud enough for our lead singer? I mean, Dallas is the band's second top listening city on Spotify and some people paid the big bucks for a ticket. We admit embarrassment on behalf of everyone in attendance, and yet maybe there's a justified reason: "Recktify" is a complex song, OK. Even fans who are capable singers would be challenged to sing along correctly. Maybe we need to take vocal training to prepare for the next RKS show.

Their signature deconstructed song style — verse-chorus-verse be damned — beautifully lays the foundation for the long-winded, intricately specific yet imaginative lyrics that we love but sometimes can't keep up with. If anything, it proves the devotion of the many concertgoers spanning all the way to the back of the room who knew every single word, nailed every single syllable. We truly are a Rainbow Kitten city.

After the light admonishing, Melo ripped off his shirt, and the band tore into the final song of the encore, "Run," which was unexpectedly the best performance of the night. "Run" is the first track on the band's second self-titled album and showcases a guitar style that cheats on their usual uppity folk rock and unabashedly flirts with the blues.

While it's a good song digitally, we would go so far as to say that if you've never heard it live, you've never heard it at all. The level of grit they pour into the deep guitar riffs combined with the high volume sound quality and lights make you feel like you're simply drowning in "dollar bills" and "money money money." The energy of the encore's finale was a possessing escape.

Or should we say, it was like a freefall.
KEEP THE DALLAS OBSERVER FREE... Since we started the Dallas Observer, it has been defined as the free, independent voice of Dallas, and we'd like to keep it that way. With local media under siege, it's more important than ever for us to rally support behind funding our local journalism. You can help by participating in our "I Support" program, allowing us to keep offering readers access to our incisive coverage of local news, food and culture with no paywalls.
Make a one-time donation today for as little as $1.