Not UR Girlfrenz Is Not UR Average High School Band 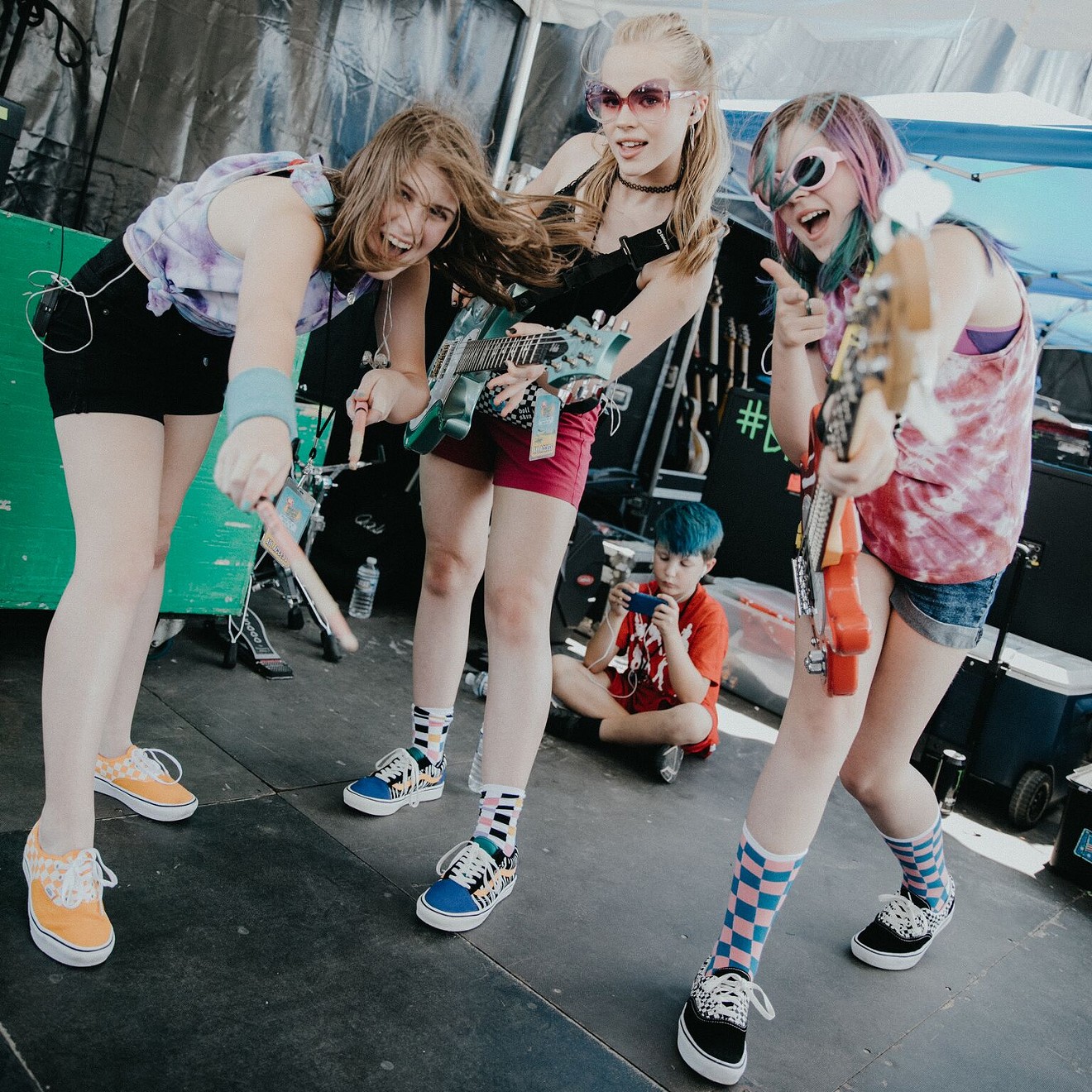 From left: Maren Alford, Liv Haynes and Gigi Haynes of the band Not UR Girlfrenz. Ashley Osborn
It’s 2:30 in the afternoon on a sunny Sunday, and a fast and poppy, punk-rock drumbeat echoes through a house on a quiet street in Frisco. Upstairs, in a converted office nook, Liv Haynes hops in time to the music, strumming her turquoise PRS Vela S2 electric guitar.

“I gotta catch some sleep / But I'm staying up to think / Of all the things that are up ahead / I can't get out of my head, no,” she sings into the mic.

Her sister Gigi accompanies her on a cherry-red bass. Across from them, Maren Alford drives the song along on drums, hair flying and feet stomping the pedals. On the round face of her bass drum, a bright pink logo broadcasts their band name: Not UR Girlfrenz.

Themes of girl power run through the teen rock group's songs and because of that, the band name has grown into a symbol of sorts, for their message. Their songs are full of up-tempo rock beats, driving guitar riffs and lyrics that push against prescribed social notions about how girls should act — while celebrating the joys of being young.

Liv, Maren and Gigi, who are 15, 15 and 13, are the youngest group ever to play Warped Tour, the Vans skate shoe-sponsored traveling rock festival credited with launching the careers of some of modern rock’s best-known bands.

“Warped Tour was the best thing that could ever happen for our band,” Liv says.

Bowling for Soup’s frontman Jaret Reddick manages the band. Although he wasn't looking to get back into management, which he had done in the past, Reddick was blown away by the band’s talent, professionalism and passion.

“I really wasn’t expecting what I would eventually see,” he says. “And I was just like, 'All right, I’m in. If you guys want to work with me, I want to do this for the long haul.'”

Now, working with the girl band is his favorite of all his jobs, and he feels a fatherly pride in how much they’ve grown.

“We're all one big family; they call me their second dad,” Reddick says. “It's almost like being a dad, and you watch your kid learn to ride a bike for the first time. That's the feeling that you get.” 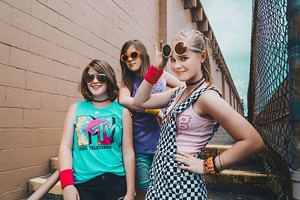 They may be young, but don't underestimate them.
Jawn Rocha
It all started when Liv — who like the other two, attends Cathryn Sullivan’s Acting for Film school — was directing a short video and wanted to have a fake band in it. Liv invited Gigi and Maren to join her for the video shoot as an onscreen band. Soon after, their acting coach asked if they could perform for some industry professionals who were going to visit the studio.

In the video from that night, Gigi, in red pants and a tuxedo graphic T-shirt, hops about the stage as she plays, energetically whipping her hair as she bobs along with the music. At one point, she even lies down on her back on the stage to play.

“Gigi set the energy level … I was like, dang, I gotta match Gigi,” Maren recalls.

“I mean, I have that effect on people,” Gigi jokes.

Although the band started as a one-off, it very quickly turned serious. From the first time that band moms Laura Alford and Amy Haynes heard the group rehearsing before their first show, it was clear that this was something special.

“We're in the landing in there and I was like, Gigi, I don’t even know if she’s really going to know how to play the bass, let’s just not," Amy recalls. "And they started playing and it sounded like the record.”

She and Laura mime the way they looked at each other then, mouths agape.

“And we ran in here and they played and then the girls were like ‘What just happened?’” Amy says.

Reddick too was blown away immediately by the band. He first heard them at a battle of the bands contest, which Not UR Girlfrenz won, and came over to their house soon after to hear them rehearse.

Having the singer come to that rehearsal was a serious pinch-me moment for the band members, who grew up listening to Bowling for Soup and watching the animated musical comedy TV show Phineas and Ferb, for which Bowling for Soup did the theme song.

“The first time we met up with him, every single time he turned away, I would turn to Liv and be like, Do you hear his voice? That's the same as [Bowling for Soup song] '1985' ” Gigi recalls.

“His voice is so iconic,” Liv interjects.

Bowling for Soup has taken Not UR Girlfrenz on tour with them around Texas, and last year, to the United Kingdom as well. For Reddick, the band’s age has never been a consideration — he first performed in bars at the age of 13. But when they started touring together, Reddick had to convince venues and other bands that the girls would not cause problems backstage. Ultimately, their professionalism and ability to keep out of the way spoke for itself.

“And now we're taking them back again in February [to the U.K.], and you know I can't just hand that out if they didn't deserve it,” Reddick says.

On the Girlfrenzs' first EP, New Kids in America, the second track, “No One Asked You Anyway,” was inspired by the times the band has been underestimated or belittled by people who don’t take them seriously.

“We've played shows where sound guys will be like, ‘Oh, are you going to be lip-synching today?’ or ‘Are you going to be playing to track?’ you know, ‘Are you actually playing your instruments?’ and ‘Do you need help adjusting your mics?’ and all that stuff. And we’re just like, ‘Come on, dude,'” Liv says.

The song, whose beginning is reminiscent of the churning, guitar-heavy intros of late-’90s alternative rock, sounds like an anthem for young women who refuse to be pushed down. It’s Jett’s fire and Avril Lavigne’s don’t-care attitude filtered through the eyes of a generation raised on girl power and confidence: “We’ve heard it all before you think we’re something to ignore / A patronizing broken record / Listen up we will be heard!”

The music video cuts between the band members dressed in prim white dresses and shoes delicately walking around a purely white room, and the three of them in their regular street clothes, alternately rocking out and plastering walls in colored paint. The second time Liv hits the first line of the song’s chorus: “Get out of the way,” paint shoots into the clean white room, spraying color across the girls' pristine skirts and erasing once and for all the notion that they should act a certain way.

“These girls take over in a way to where you're just like, I can't believe I'm seeing this right now,” Reddick says.

Liv writes all the band’s songs, in consultation and partnership with Reddick. Often the best ideas come to her late at night. She leaves herself voice memos on her cellphone with snippets of lyrics, melodies and thoughts about what instrumentation to add. Sometimes there’s just notes about how “plinky” to make a part or which sections need to be more like U2.

When she’s done writing a song, she sends it to Maren with notes about her vision for the drum parts. Often she simply says “drum fill here.”

“You were like, ‘I know what to do, I can read her thoughts,’” Liv says, laughing.

Over the past couple of years, Liv’s songwriting has grown and the band’s become adept at interacting with crowds and fans. It seems as though they’re really on to something, Reddick says.

“They just make it happen. And it's like, the craziest thing. They work really hard. But they're having so much fun. And it's just so awesome to watch. It's crazy. I was not this cool when I was their age,” Amy says.

“I don’t think any of us ever thought we’d be here,” Laura adds.

Their lyrics are clean and kid-friendly. At shows, seeing young fans who dress or wear their hair like them is one of the best parts of performing. Recently, Gigi, whose hair is pink, met a fan who had dyed her hair pink to match hers.

“It's really great that they have actually become role models and not only for their peer group … but also younger kids coming up, inspiring them to pick up an instrument or thing, do art or anything, just find a passion,” Laura says. 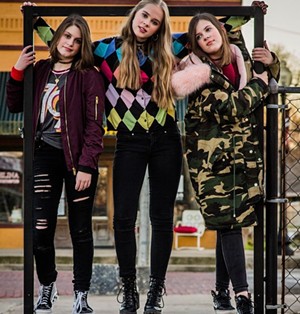 The trio keeps it kid-friendly.
Austin Marc Graf
At rehearsal, Amy and Laura watch their daughters and nod along to the songs they must have heard hundreds of times by now. At Warped Tour this year, there were hundreds, if not thousands of people who came exclusively to see them, Amy says.

Manning the merchandise booth, she and Laura watched as the line at the autograph tent grew and grew while the girls put their instruments away. When the band showed up, the people waiting screamed and waved. The girls thought that a big star must've been doing a signing.

“And they realized, 'Oh my gosh, they’re here for us,'” Laura recalls.

Lately, Reddick noticed, some Bowling for Soup fans have even switched their Facebook-listed favorite band from Bowling for Soup to Not UR Girlfrenz. At least they’re keeping it in the family, he says.

Like a proud father, he brags about the band a lot. Reddick’s quick to say that Liv already plays guitar better than he does and laughs at how many people ask if he wrote their lyrics, because they’re just that good. Slightly begrudgingly he charts their musical evolution from early Jett and Lavigne inspiration to their current mishmash of Thirty Seconds to Mars and Waterparks.

“But most of all what I would say,” he says, “is just go see them because they’re going to rock your face.”
KEEP THE DALLAS OBSERVER FREE... Since we started the Dallas Observer, it has been defined as the free, independent voice of Dallas, and we'd like to keep it that way. With local media under siege, it's more important than ever for us to rally support behind funding our local journalism. You can help by participating in our "I Support" program, allowing us to keep offering readers access to our incisive coverage of local news, food and culture with no paywalls.
Make a one-time donation today for as little as $1.