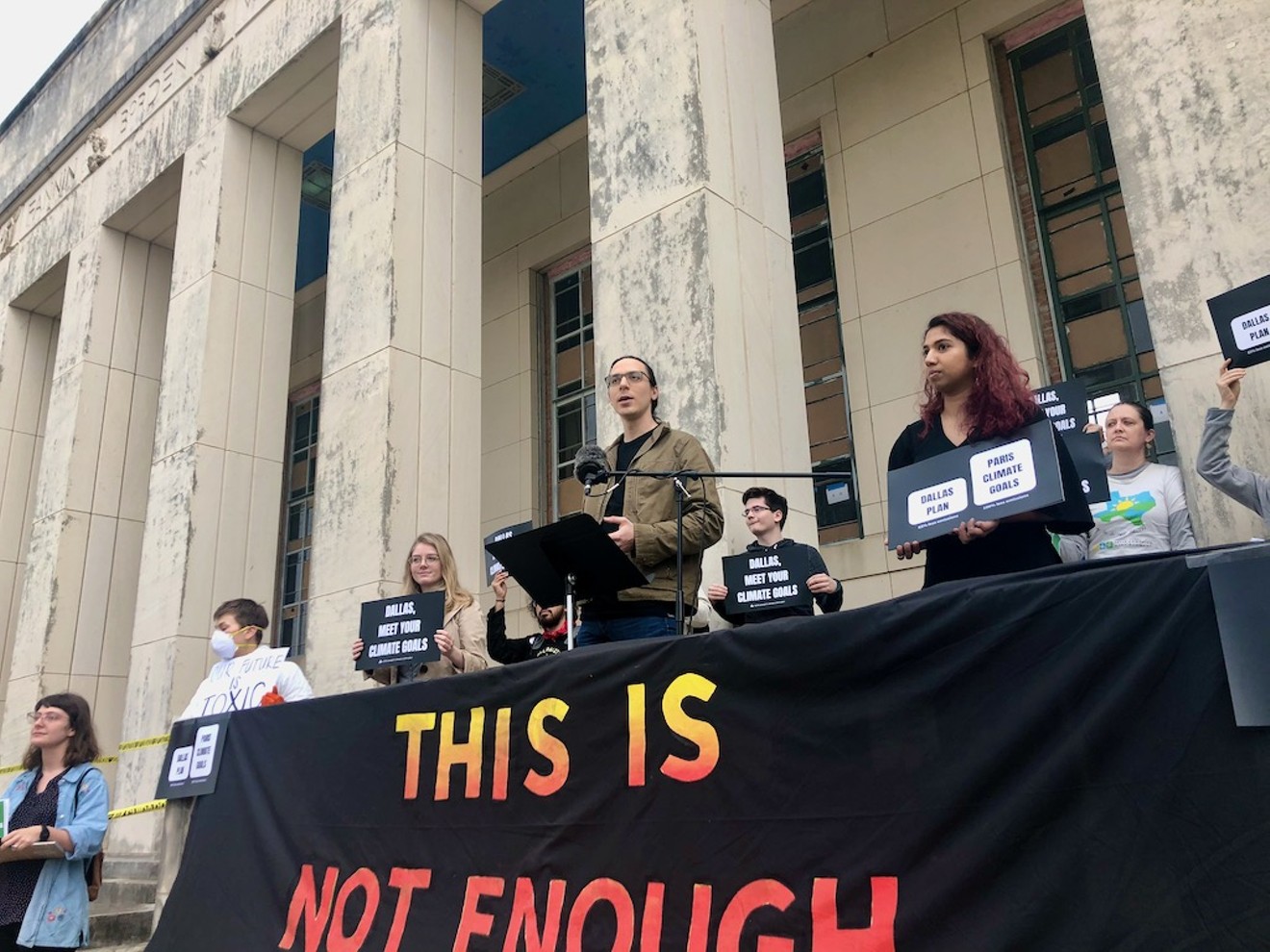 It was in response to Dallas' climate plan, which was released in draft form last month and is to be adopted by the City Council on Earth Day in April. Its proponents call it "viable and reasonable." Its detractors say it isn't enough to stop an impending crisis.

"The city's current plan doesn't reach even its own carbon emissions target," said Hope Endrenyi, one of the protest's organizers. "They need to take bolder action."

Endrenyi is a local organizer for the Sunrise Movement, a national youth-led organization that seeks urgent action on climate change.

Mayor Eric Johnson has committed the city to meeting the goals set out by the 2016 Paris Climate Agreement. That means eliminating emissions by 2050. To achieve this, Dallas set a 2030 reduction target of 43%.

But the city's proposed solutions, activists point out, don't even get halfway there. If all 90 "actions" listed in the plan are taken, the city will reduce emissions only 18% by the deadline.

Nine organizations, including the North Texas chapter of the Democratic Socialists of America and Veterans for Peace, have formed a coalition that is proposing an alternative "people's climate action plan." They offer alternative measures that didn't make it into the city's plan, from de-privatizing the electric grid to eliminating fares on DART.

"There's gonna be some places where we think — you all may think — that we're falling short as a city." — Omar Narvaez


They call it a Green New Deal for Dallas. They say the city doesn't have a choice but to implement a far more aggressive plan if it wants to help mitigate rising temperatures, which scientists say will cause irreversible harm to people and the environment across the globe.

Councilman Omar Narvaez, chairman of the city's new environmental subcommittee that is overseeing the rollout of the comprehensive climate plan, or CECAP, acknowledged the opposition in his speech to the symposium Tuesday.

Then, he promised Dallas would "become a global leader on environmental and sustainability issues."

But activists already have reasons for doubt. Rita Beving of Public Citizen, which participated in "stakeholder sessions" with city officials but is not part of the coalition, said she was disappointed when she compared the result with plans from other cities.

"I very simply went to the Atlanta plan. I went to the Denver plan. I found at least six or seven new strategies that we could consider, like sub-metering buildings or mandating that rental properties do incremental energy efficiency improvements," she said.

Her organization, Public Citizen, has been involved in climate planning in cities across Texas. It submitted detailed comments on the plan to city officials and suggested the city establish quantifiable goals to measure progress every few years, as well as commit to financing more of the plan's proposals.

Beving pointed out that, as the plan is currently structured, there's little way to tell which of the 90 proposals will have the biggest effect on greenhouse gas emissions and are therefore worth preferential investment.

She also echoed a demand included in the "people's" plan that the city establish a dedicated oversight commission. The city eliminated its Dallas Environmental Commission, which fielded resident complaints about air or water quality, in 2010.

Corey Troiani, another protest organizer, criticized the plan's development process. On behalf of the Texas Campaign for the Environment, he also participated in early community feedback sessions. City officials and the contractors they hired to produce the plan "were talking at us during those meetings," he said.

"Hardly any of our input made it into the final draft."
KEEP THE DALLAS OBSERVER FREE... Since we started the Dallas Observer, it has been defined as the free, independent voice of Dallas, and we'd like to keep it that way. With local media under siege, it's more important than ever for us to rally support behind funding our local journalism. You can help by participating in our "I Support" program, allowing us to keep offering readers access to our incisive coverage of local news, food and culture with no paywalls.
Make a one-time donation today for as little as $1.