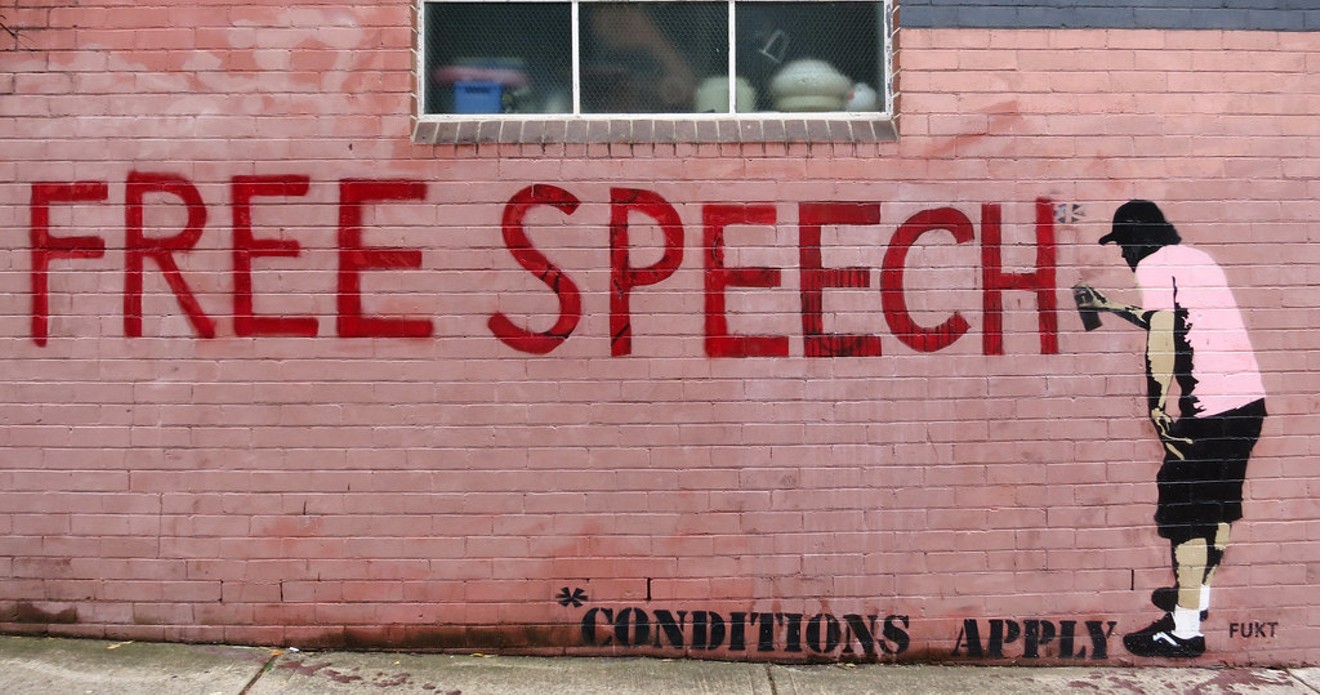 A Collin College professor's controversial tweets put her in the national spotlight. "Free Speech * Conditions Apply by Fukt" by wiredforlego is licensed under CC BY-NC 2.0
On Oct. 7, Collin College history professor Lora Burnett tuned into the vice-presidential debate and began to tweet.

But it was this tweet that would get her in trouble with her employer.

“The moderator needs to talk over Mike Pence until he shuts his little demon mouth up,” Burnett wrote.


The moderator needs to talk over Mike Pence until he shuts his little demon mouth up. #VPDebate

Burnett’s posts became troll fodder after they were published on Campus Reform, a conservative watchdog news site that seeks to “expose liberal bias and abuse” on college campuses. Then, Fox News grabbed the baton and ran its own piece.

From there, Burnett was deluged with obscene and vulgar emails from internet trolls, she wrote in a column published by The Chronicle of Higher Education. Blustering bullies called her a Nazi, a Marxist and a pig.

Burnett claims to have warned her administration about the impending fiasco and figured that they'd be on her side. She also said she copied her college president, Neil Matkin, to her responses so he could see how she was handling the online harassment.

Yet Matkin never reached out to her personally, nor did he offer her any support, Burnett wrote. Instead, Matkin “threw [her] under the bus” when he sent an all-faculty email to caution that the college was now in the midst of a national controversy, she said.

Although he never mentioned Burnett by name, Matkin said the college was flooded by calls to demand that she be fired. A few defenders had asked for the school “to uphold ‘academic freedom’ and ‘free speech,'" he wrote.


Here is the President's email to all faculty in the entire college -- the first notice or acknowledgment I received from my college about any of this. pic.twitter.com/n8LaN6bK3c

Matkin also said that the college would not execute its personnel policies in a public manner.

But in a statement on Collin College’s website, the school apologized profusely to those who were offended by the professor’s “hateful, vile and ill-considered” comments. Although it acknowledged that free expression is guaranteed by the Constitution, the post said that profanity and hate are out-of-bounds.

"LOL. @CollinCollege is publicly throwing me under the bus, while the college president sends out an email saying that personnel decisions will not be played out in public," she wrote.

From there, school officials emailed Burnett an “Employee Coaching Form” along with “Constructive Feedback," said Adam Steinbaugh, a lawyer with the campus free speech nonprofit Foundation for Individual Rights in Education (FIRE). They also forbade her from using her work email when dealing with personal communications.

But school policy allows professors to use such resources for “incidental personal use," Steinbaugh said, calling the move "the first step on the road to discipline."

As such, FIRE sent a letter to Collin College demanding that they state unequivocally that Burnett’s speech is protected.

Many others in academia jumped to Burnett’s defense, such as Hank Reichman, chair of the American Association of University Professors' Committee A on Academic Freedom and Tenure. In an article on Academe Blog, he wrote that Matkin’s handling of the ordeal was a “shameful display of moral cowardice.”

An open letter by members of Texas Tech University’s history department asked Matkin to retract his college-wide email. And Jonathan Friedman, a program director with the free expression nonprofit PEN America, lent his support to Burnett in a tweet.

“Right wing TROLLS have been upping their harassment of faculty,” he wrote. “There’s a basic human way to react to this and this college failed.”


Right wing TROLLS have been upping their harassment of faculty. This new piece by @LDBurnett details her recent experience and how @collincollege threw her under the bus. There's a basic human way to react to this and this college failed. https://t.co/dhfC0UcJ0U

In its piece, Campus Reform also called out another professor, Sami Schalk, for tweeting during the debate that Pence is a “racist fucking piece of shit.”

Schalk's employer, the University of Wisconsin-Madison, responded to that outlet’s request for comment in a markedly different way.

"When students, faculty, and staff exercise their First Amendment rights to express opinions, they are speaking for themselves, not the university,” they wrote.
KEEP THE DALLAS OBSERVER FREE... Since we started the Dallas Observer, it has been defined as the free, independent voice of Dallas, and we'd like to keep it that way. With local media under siege, it's more important than ever for us to rally support behind funding our local journalism. You can help by participating in our "I Support" program, allowing us to keep offering readers access to our incisive coverage of local news, food and culture with no paywalls.
Make a one-time donation today for as little as $1.