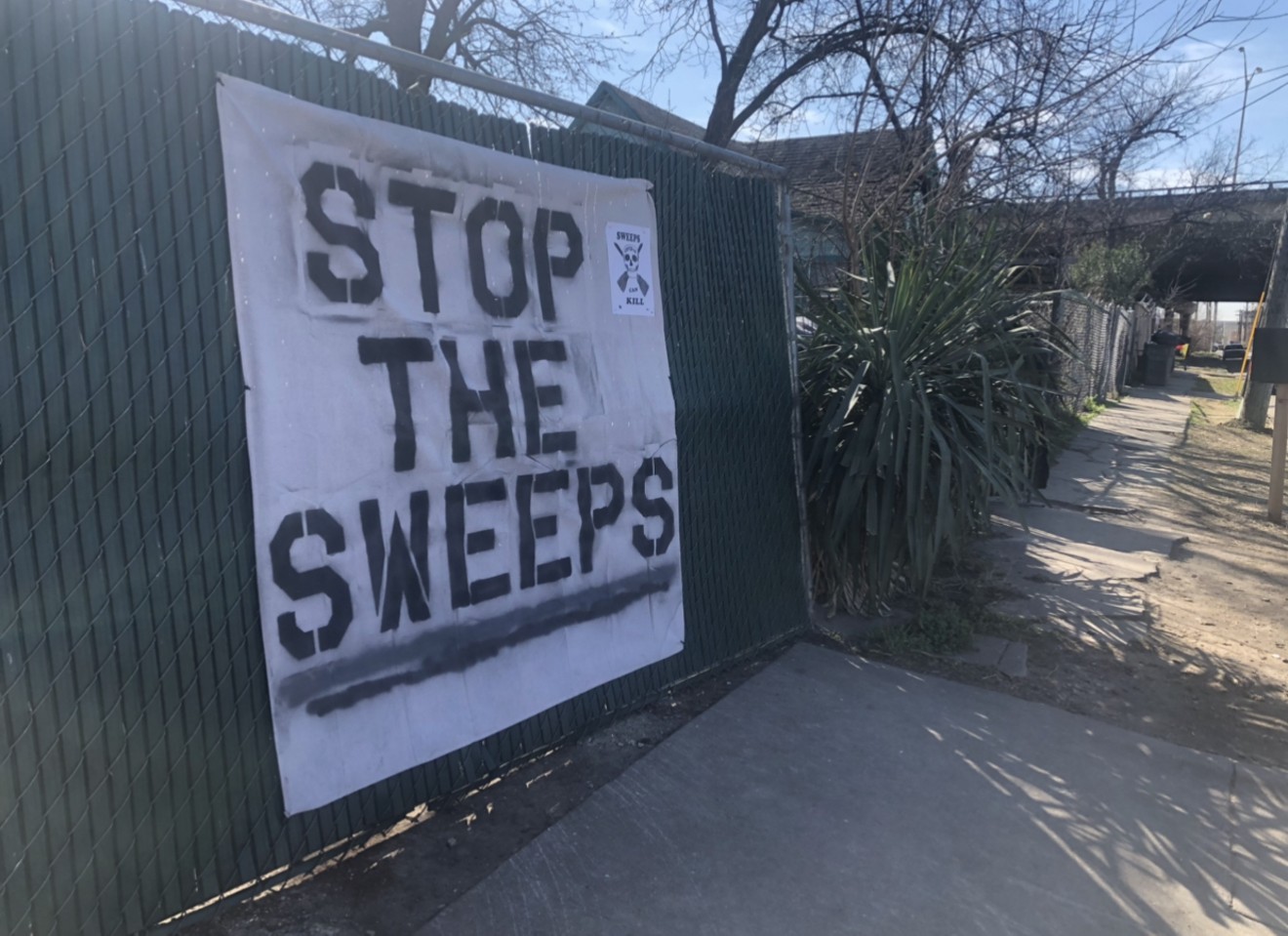 Usually, the sign on the gates at Johnny Aguinaga’s property reads “Camp Rhonda.” Now, a different sign hangs in its place. Jacob Vaughn
The city is threatening to raid a property where more than 30 people are living in tents until they can find permanent housing. Dallas code compliance staff have warned Johnny Aguinaga, the property's owner, he is using his land illegally by allowing homeless people to camp there.

Aguinaga, a homelessness activist running for City Council’s District 4, said he was told to remove all tents from his property by Feb. 6.

Before the pandemic, Aguinaga said, the city conducted sweeps on his property when they saw tents going up, giving campers 72 hours advance notice to clear out. After three days, a small army of people hired by the city arrived to get rid of any people or items left behind.

Following guidance from the Centers for Disease Control and Prevention, Dallas has been cutting these folks some slack.

Per the CDC guidance, the Dallas Police Department, Office of Homeless Solutions and city contracted vendors have temporarily suspended their anti-encampment efforts, shifting the focus to ensuring these homeless populations don’t contract COVID-19.

Usually, a sign hangs on the gates surrounding Aguinaga’s property that reads “Camp Rhonda.” Now, a different sign is in its place.  “Stop the sweeps,” it reads.

Aguinaga said sweeps in downtown and Deep Ellum led homeless populations closer to what is now Camp Rhonda near Interstate 45 and Ferris Street.

The encampment started with three tents. The number quickly swelled to more than 20. “I cannot kick them out,” he said. “My heart cannot do that.”

The camp is named after one of its first residents. Aguinaga says Rhonda was the glue that held the camp's community together. She died earlier this year. He owns another piece of property that he calls Camp Joy, where eight people live. 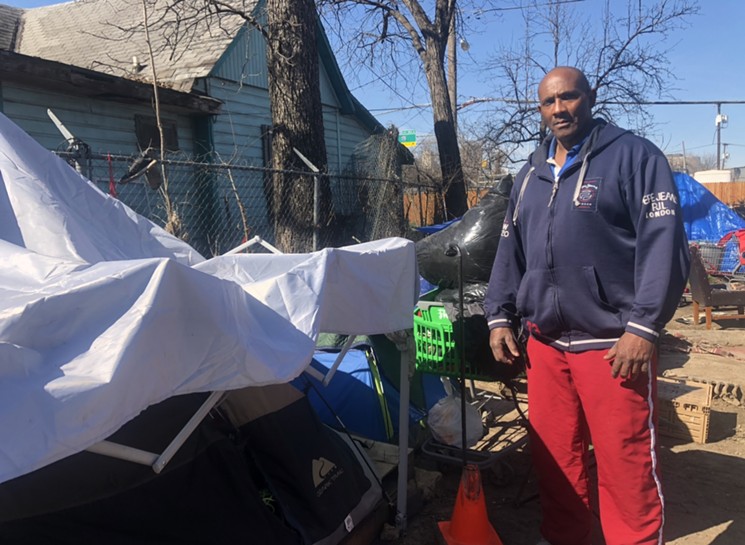 Kevin Stuart, a veteran who has been staying at Camp Rhonda for a few months, said if the camp gets shut down and the city doesn’t offer up any help, he’ll just have to move on to the next encampment.
Jacob Vaughn
People at Camp Rhonda said they have nowhere else to go.

Kevin Stuart, a veteran who has been staying at Camp Rhonda for a few months, said someone with the city stopped by Monday and told him that the site would eventually be shut down. He said he was told its residents will be able to get into hotels arranged by the city, which might find them permanent housing after that.

Stuart said he has been homeless since 2015. For a few years, he said, he was complacent in his homelessness, succumbing to addiction to methamphetamines. Since 2019, he’s been trying to get back on his feet.

Stuart was optimistic about what the people with the city told him Monday, but if the camp gets shut down and the city doesn’t offer any help, he’ll just have to move on to the next encampment. He doesn’t want that.

“This has been a place of community,” he said. Stuart said living is safer at Camp Rhonda, where services are provided and where he doesn’t have to worry about being robbed. Whatever happens, he said, he knows everything will be OK. "If you don't have faith, you can't even get the ear of God," Stuart said. "He doesn't answer to my tears or to my need. He only answers to the call of faith."

As chair of the Human and Social Needs Committee, Councilman Casey Thomas oversees the Office of Homeless Solutions. Thomas said he didn’t know details of what was happening at Camp Rhonda and referred questions to Councilman Adam Bazaldua. The camp is in Bazaldua’s District 7, but he did not respond for comment, nor did Kevin Oden, the interim director of the Office of Homeless Solutions.

Aguinaga said the people at Camp Rhonda have everything they need there. Organizations like Say It With Your Chest and Feed the People Dallas Mutual Aid provide food, hygiene products and other supplies at no cost to the city.

The last annual count of homeless populations in Dallas found that after years of increases, the city saw fewer people experiencing homelessness. It also found the city's efforts were successful in moving those people from one place to another, but not getting them off the streets and into housing.
KEEP THE DALLAS OBSERVER FREE... Since we started the Dallas Observer, it has been defined as the free, independent voice of Dallas, and we'd like to keep it that way. With local media under siege, it's more important than ever for us to rally support behind funding our local journalism. You can help by participating in our "I Support" program, allowing us to keep offering readers access to our incisive coverage of local news, food and culture with no paywalls.
Make a one-time donation today for as little as $1.