In her childhood, Derry and her family sourced many of the ingredients they would use in their home from a farm. For Roots’ menu, she plans to source from several nearby farms, including Profound Farms and Cooper Farms, to keep each ingredient as local as possible.

“Roots Southern Table is a modern Southern approach,” Derry says. “The idea here is that we're using things from local from the gardens, things that are more Southern in my area. I'm from Louisiana, and so during the summer, it was beans, and corn and okra; great summer vegetables. So as you look at the menu, you'll see that influence.”

On the Down Home Roots section of the menu, Derry offers starter items like the fried shrimp and grits, a ball of shrimp and jalapeño cheese grits sat atop a bed of sausage-tomato stew ($12). Other down-home items include the Southern greens ($10) and cast-iron cornbread ($12).

The Modern Roots menu will include more veggie-forward items, including a spring pea salad ($12) and stuffed zucchini flowers ($14). Plus, the duck-fat fried potatoes, if you’re feeling naughty ($8). 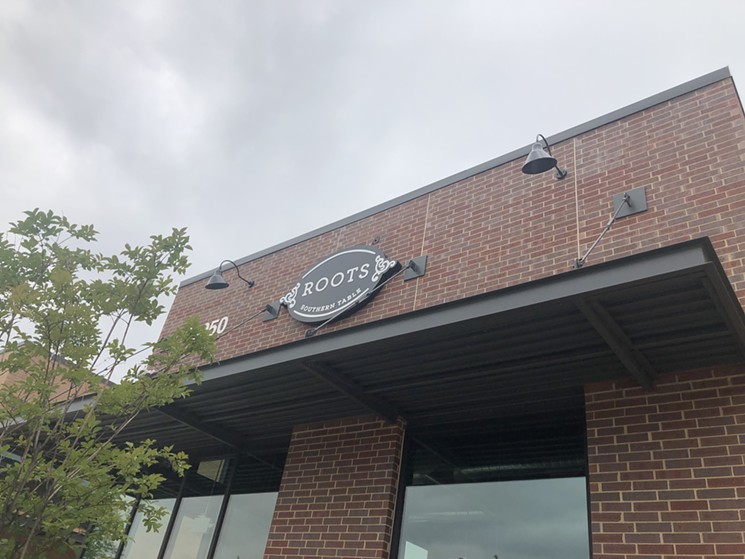 Roots Southern Table will open on June 18.
Alex Gonzalez
But don’t expect any mac and cheese dishes. Derry’s menu is largely inspired by the types of food she ate growing up.

Signature cocktails include the LeVeau cocktail, a “citrusy and tart” cocktail similar to a Hemingway daiquiri. Another is the Kool-Aid cocktail, made with Tito’s Vodka, hibiscus tea, homemade strawberry syrups and served with a sugar cane stick. Syrups and tonics will be made in-house.

Derry originally planned to open Roots Southern Table “about four or five years ago” before she even opened Roots Chicken Shak at Legacy Hall. She says she was approached by the people behind Mustang Station at Farmers Branch at the right time and is looking forward to operating in a central location.

“I just love that we're not too far north and not too far south,” Derry says. “We're a good midpoint for most people, with easy access to 35. And I love being in a neighborhood because I want the restaurant to be a neighborhood spot.”

Root’s Southern Table. 13050 Bee Street, Suite 160, Farmers Branch. Open 5 to 10 p.m. Tuesday through Sunday.
KEEP THE DALLAS OBSERVER FREE... Since we started the Dallas Observer, it has been defined as the free, independent voice of Dallas, and we'd like to keep it that way. With local media under siege, it's more important than ever for us to rally support behind funding our local journalism. You can help by participating in our "I Support" program, allowing us to keep offering readers access to our incisive coverage of local news, food and culture with no paywalls.
Make a one-time donation today for as little as $1.