Curl up in one of Sura Korean Bistro’s booths and get ready to fill up on Korean barbecue and banchan. Kathy Tran
Sura Korean Bistro makes an unforgettable first impression. Just inside the vestibule, a glass case houses plastic models of the house specialties. At the host stand, on my first visit, an employee had left an ordinary grocery shopping cart full of melons and cantaloupe. Banners proclaim an “All You Can Eat Meat Buffet,” the six most beautiful words in the Texan language. And the restaurant’s ambiance, too, is quite the sight: Down the middle of the dining room is a series of lavish but unfinished booths, each table flanked by one plush, luxurious booth bench and, on the other side, a single ordinary wooden chair.

And then there are the lunch boxes.

Each of Sura’s daily lunch box specials features an oversized bento box, the size of a cafeteria tray, with a half-dozen compartments brimming with food. For the main course, consider bulgogi (marinated beef), galbi (short ribs) or my personal favorite, daeji bulgogi, thinly sliced grilled pork in a spicy marinade ($10.95). The tender pork slices and their gentle heat come atop a bed of onions and are surrounded by a parade of side dishes. There’s a fairly ordinary salad, a cool and spice-relieving bowl of clear noodles and green onions, rice, a crisp-battered dumpling and even a single brightly flavored piece of sushi. 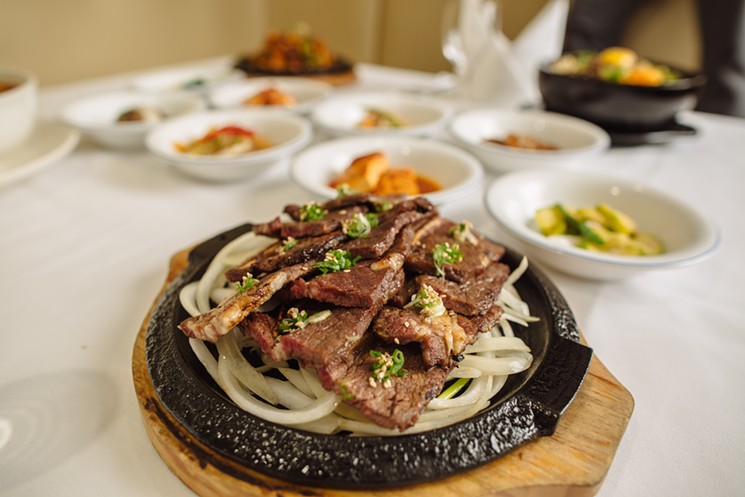 Lunch special No. 3, the daeji bulgogi at Sura Korean Bistro
Kathy Tran
It’s enough for an ample, tasty and reasonably well-balanced lunch, but of course Sura also brings out banchan, the tiny bowls of vegetables placed in the center of the table for sharing. There’s a duplicate of the cold clear noodles (which I devour for seconds), a mix of cucumbers and hot peppers, house kimchi, sprouts, eggplant and wonderfully tender potato slices in chili sauce. The result is a lunch fit for royalty, which is fitting, since the word “sura” originated centuries ago as a name for the meals eaten by the Korean royal family.

The superb lunch boxes and mellow atmosphere made me a fan, indeed a regular, of Sura Korean Bistro long before I ever tried the All You Can Eat Meat Buffet.

Spicy brisket noodles
Kathy Tran
The buffet, frankly a bargain at $22.95 at dinner ($16.95 at lunch), does not disappoint. It takes place upstairs in its own dining room. Some of the features here will be familiar to anyone who’s been to a Korean barbecue restaurant: the do-it-yourself grilling on each table, the thrill of occasional flames, the staff happy to help by tending the grill and flipping meats. Scissors, rather than knives, are provided for trimming meat down to chopstick-sized pieces.

Start with a cup of the house tofu-and-veggie soup, which has just the right amount of spice in a brown broth that tastes more comforting than it looks. Then walk over to the cooler in which Sura stores its meat buffet. In addition to marinated bulgogi and galbi, there’s a stock of thinly sliced prime beef brisket, pork jowl, thin and thick slices of pork shoulder and pork belly, skin-on shrimp and even whole baby octopus, though when I first checked the ice was still melting off the octopus.

The All You Can Eat Meat Buffet also has a couple of guilt-inducing warning signs pointing out that there are starving children in the world, and threatening that, “Any meat leftover [sic] will be charged $10 per table. Please be conservative and take only what you can eat. The $10 penalty will be donated to UNICEF.”

Later my waiter would tell me that the $10 charge is more of a deterrent than a routine occurrence. “I’ve never had to charge anyone,” he said, “but there have been a couple people who’ve paid it. Usually they leave a lot of meat behind,” and his hands gestured to indicate a mound of food.

In any case, the meats are all good quality, and grilling them is fun. Waiters seem to err on the side of overcooking for safety reasons, but, left to grill our own, my table enjoyed tender and well-marbled pork belly, wonderful shrimp and grilled short ribs dipped in a savory sauce provided on the side. One pork shoulder option has a gently sweet marinade. Octopus is the trickiest thing to grill, since the tentacles are thin, the main body is much thicker and overcooking makes it inedible, but we enjoyed some miraculous beginner’s luck.

A separate buffet table for sides includes many of the banchan from the regular dining room, a mixture of veggies in chili sauce, onions sliced in wedges for grilling, french fries that taste the way french fries taste after they’ve been on a buffet table for an hour, rice and, yes, more meat, including chicken wings.

Downstairs, Sura has plenty of satisfying dinners that don’t involve a limitless supply of raw beef. There are Korean staples like bulgogi and bibimbap, the rice bowl topped with a choice of meat, a selection of veggies, some crispy seaweed and a runny egg yolk. Order dolsot bibimbap ($9.95 at lunch, $11.95 at dinner) to get a piping-hot stone bowl that turns the rice at the bottom deliciously crispy. Sura isn’t a top choice for bibimbap, though, because, a little ironically, they skimp on the meat.

You can go fill up on grill-it-yourself-meat at Sura's meat buffet, but the Korean restaurant issues a $10 fee (donated to UNICEF) for taking more meat than you can eat.
Kathy Tran
There’s plenty of action going on in a menu section called “Monthly Specials.” Ohsam bulgogi ($10.95 at lunch, $15.95 at dinner) punches up a classic by stir-frying marinated pork with squid, vegetables and a spicy chili sauce. It’s hard to resist. There’s a spicy brisket noodle soup, too, but the green beans inside only get more brown and overcooked as the soup sits ($10.95 at lunch, $12.95 at dinner). And for those who can handle bone-in fish, a clay pot with both beltfish and redfish ($10.95 at lunch, $13.95 at dinner) is a nicely cooked choice in another gently spicy sauce.

With its separate floors for regular dining and barbecue, Sura is a veritable palace of Korean cooking. But, as satisfying as the All You Can Eat Meat Buffet might be, I’ll keep coming back at noontime for the simpler pleasure of spicy pork bulgogi. What’s the point of being adults if we can’t enjoy unlimited meats and an enormous, delicious Korean lunch box?