Trendy Mexican Spot Jalisco Norte Wants to Push the Envelope, Please Dallas Crowds. Can It Do Both? 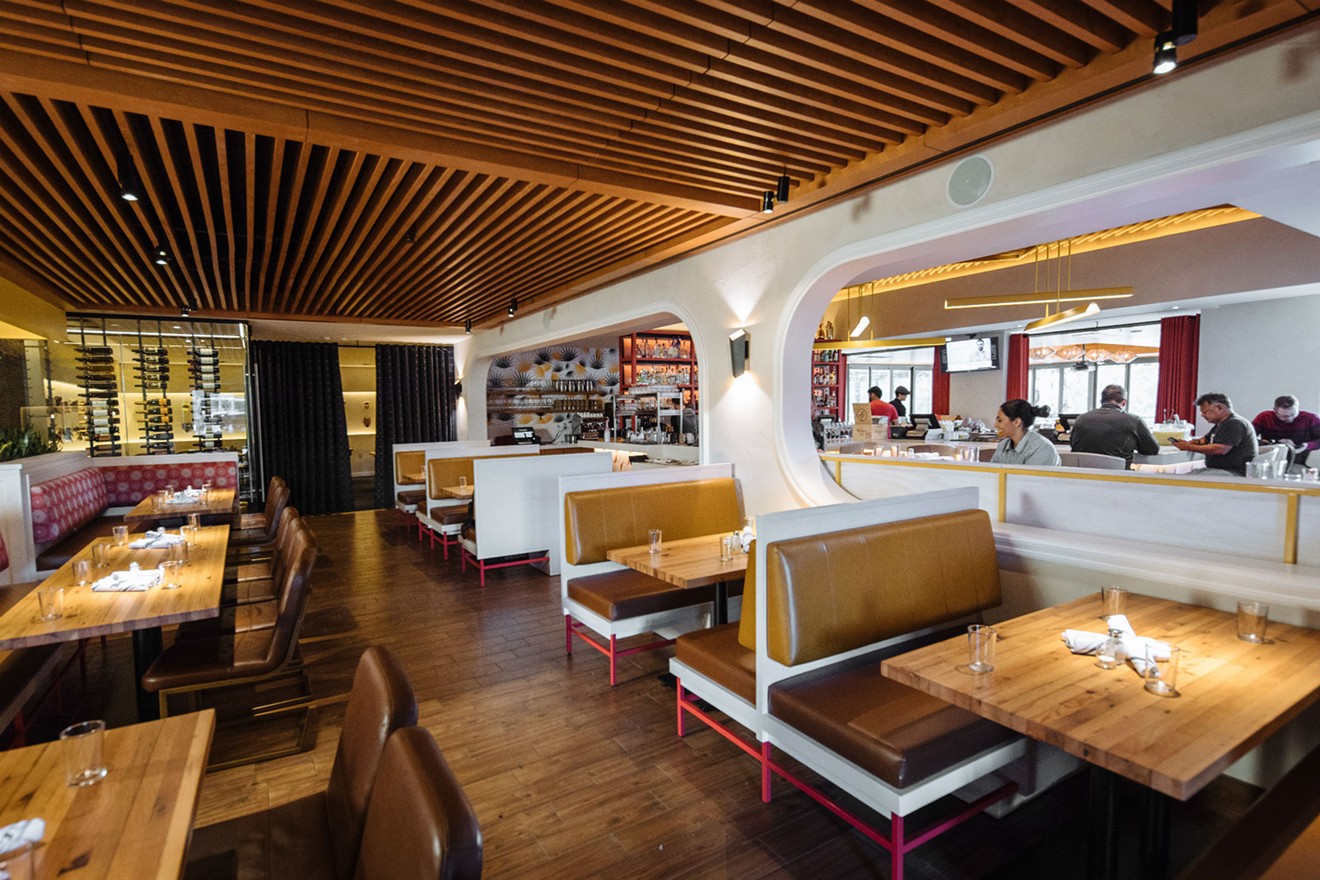 The tagline on Jalisco Norte’s website summarizes this new restaurant’s double identity. The Mexican hot spot, right between Uptown and Highland Park, is trying to have things both ways, serving sophisticated Mexican fare available nowhere else in Dallas while also plating $9 orders of nachos that come with exactly six chips.

So far, the promise of familiar flavors and a touch of prestige have brought in big crowds of upper-crust customers. Even on a Monday night, the scene at Jalisco Norte makes me feel like the chubbiest, worst-dressed guy in the room. It doesn’t help when my waiter sees how quickly I’m eating and bursts out laughing.

When the novelty wears off and the crowds flock to the next new opening, what will be left at Jalisco Norte? Behind the compromises made to diners who will only eat Tex-Mex — there is a whole menu section called “Los Familiares” with items like cheese enchiladas — a truly interesting restaurant might be emerging. 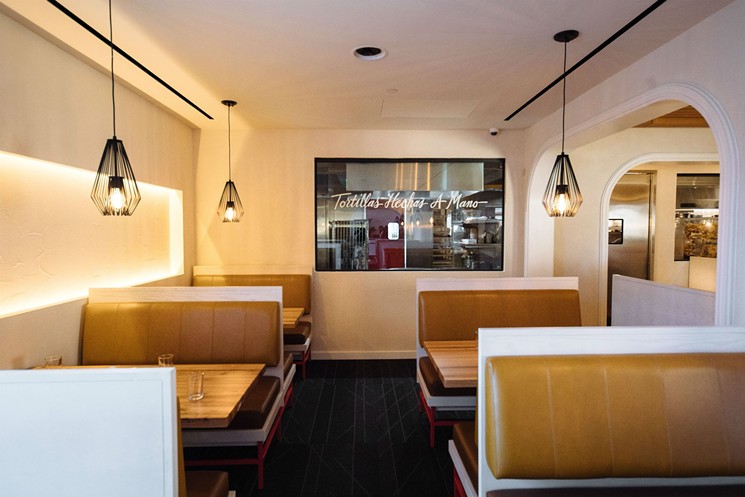 The interior and tortilleria at Jalisco Norte.
Kathy Tran
The investors behind Jalisco Norte hired an accomplished chef to help them stay on trend. José Meza Arróyave, who trained with Enrique Olvera in Mexico City, deserves a chance to present his vision of modern Mexican food. The challenge is that he also has to fill a dining room that seats more than 200 customers in a neighborhood that is not always keen on experimentation.

Some of the best dishes involve Meza riffing on classic antojitos (snacks), like his presentation of “surf and turf” on a sope ($13). Diners get their tender grilled octopus and pork presented on a fried masa base with a thick schmear of black beans. Tacos are served on corn tortillas made from scratch in a demonstration kitchen — customers can walk up to the tortilla window and watch. It’s always a delight when a sleeve of these tortillas arrives by surprise with a main course.

There’s not as much style to the tlacoyos ($11), a vegetarian main course of small, bean-stuffed discs of masa topped with julienned vegetables and not much else. Taco fillings can be inconsistent; duck pibil, for instance ($13 for three tacos), gets the citrus and spice of Yucatán-style pibil just right but wastes the duck by shredding it. The result is scrumptious, but it tastes like any generic meat, and I’d prefer to see the cilantro garnish minced rather than served as whole, wilted sprigs.

Jalisco Norte has a menu filled with sopes, gorditas and tacos, with all the masa made in-house.
Kathy Tran
Right now, the menu’s star is a Mexican seafood dish that gets almost no play on Dallas menus: pescado zarandeado. This is a preparation popular on the Pacific coast in which the fish is treated to a sweet-sour marinade with a squeeze of lime and a small hit of spice from ground chiles. Jalisco Norte offers a few fish choices; I went with a half branzino ($19), which was fully deboned and redolent of the smoky force of the grill. Dots of whipped tropical fruit added a new dimension that was both cheffy and charming. If the fish had come off the grill a half-minute sooner, the plate would have been flawless.

Like the seafood, the other main courses are at their most intriguing when they riff on dishes that don’t appear on many Dallas menus. Manchamanteles is a classic mole sauce overlooked by Americans in favor of the nutty, chocolatey mole poblano. Seasonal fruits are the stars of the sweeter manchamanteles, which roughly translates to “the tablecloth-stainer.” It’s a natural fit for Jalisco Norte’s pork chop ($20), which also benefits from being fatty and perfectly grilled — a good pork chop by any measure.

We were a little less impressed by the birria de res, a beef short rib braised and served with a gently spicy sauce and fresh-made tortillas ($22). Although the sauce was richly bitter-savory and the meat tender, something was missing. Actually, two things were missing: a bit of contrasting brightness (lime?) and stew. Birria is typically a stew served with broth, but this modern take updates it to a plate of meat and gravy.

Jalisco Norte's grilled branzino.
Kathy Tran
Oddly enough, the food I kept craving from Jalisco Norte, the standout on almost every plate, was the refried beans. Smooth and thick, pureed to buttery richness, the beans are also speckled with pepper flakes. To get the perfect texture, Meza uses both lard and caramelized onions, and for the subtlest hint of spice, he adds chiles de árbol and guajillos. These might be my favorite refried beans ever.

Jalisco Norte's chef José Meza Arróyave.
Kathy Tran
Even more surprising are the smashed potatoes ($5) whipped with a squeeze of lemon and so much cheese that macaroni-style strands of cheese dangled from my fork every time I pulled a bite away. I didn’t see any of the peppers or carrots that the menu described, but the potatoes are simply too gooey and rich to complain about.

There are other touches that suggest a creative chef hoping to break free. Jalisco Norte serves every diner chips and salsa — skipping this ritual would cause mass hysteria — but alongside the familiar salsa verde, Meza slips in a tiny bowl of a chocolate-brown salsa made from morita chile peppers. It’s nutty, savory, sweet-spicy and utterly addicting. I’d buy gallon jugs.

These are still the early days at Jalisco Norte. The restaurant stands at a crossroads. Meza may be hoping that customers buy into his style so that they will in future be more willing to follow him into territory more adventurous than nachos and quesadillas. To judge from the place’s eye-popping design and Mexican artwork, Meza’s financial backers are looking to make good on voluminous writing of checks. Let’s hope those goals stay aligned.

There is great promise in the handmade corn tortillas, in the grilled fish, in the connoisseurial selection of tequilas and even in the refried beans. There is peril in the sleek glass cube of mediocre wines that are mostly available at Kroger. That’s Jalisco Norte in miniature. In a year’s time, this restaurant could be playing things safe — or it could be great.