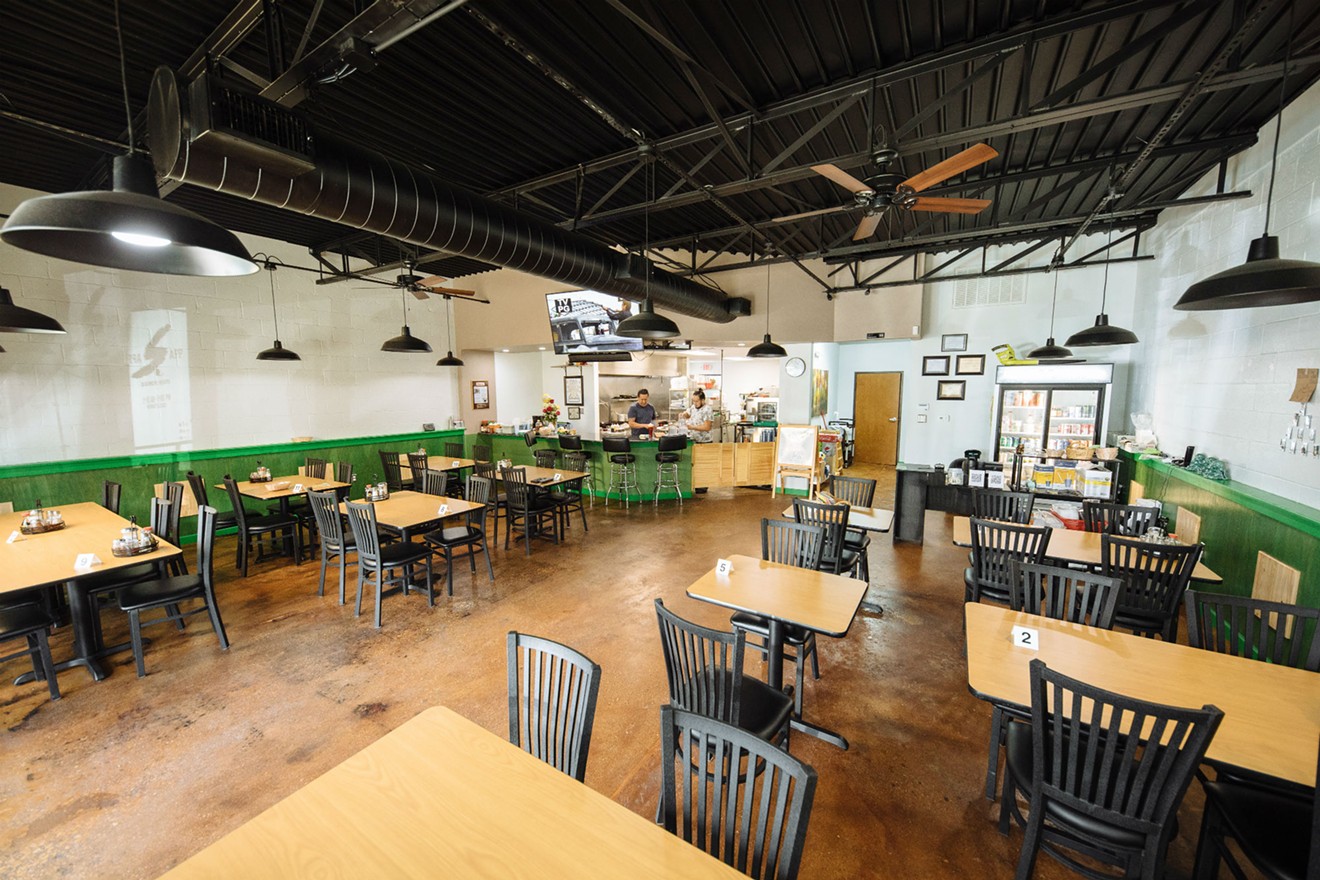 Sapp Sapp Lao and Thai Kitchen is on Main Street in downtown Irving. Kathy Tran
Change is in the air in downtown Irving. It’s plain to see, even on Main Street, a historic block with decades-old storefront awnings and a median lined with tall, leafy trees. Up the way, an old-fashioned soda fountain serves patty melts and tater tots, and a train track junction dramatically ends the traditional core of what has become a very untraditional suburb.

Irving is one of the most diverse areas in North Texas. A 2012 Trulia survey said that one of its ZIP codes was the most diverse in the country, and the latest Census Bureau survey found that more than 15 percent of respondents claimed a racial identity of either “two or more races” or “other.” To get a peek of that evolution in action, head down to Main Street, where today’s culinary attractions are diner-style cheeseburgers at Big State Fountain Grill and one of the heartiest bowls of soup in Texas, from Sapp Sapp Lao and Thai Kitchen.

It’s not the size that makes Sapp Sapp’s kowpiak “Xay-style” so generous. It’s a manageably sized bowl, the kind that won’t leave you groaning from overload. But this kowpiak has the works: beef, crispy-fried shards of pork belly, cubes of pork blood, four quail eggs and a showering of herbs ($10). The broth is nearly translucent but intensely savory, perfect for winter weather, and the pork belly gives this pho unexpected crunch. As for the cubes of blood, they retain heat extremely well — wait until the soup cools down — and although Sapp Sapp is happy to omit them for squeamish customers, there’s nothing bizarre in either the soft-but-firm texture or the savory taste. 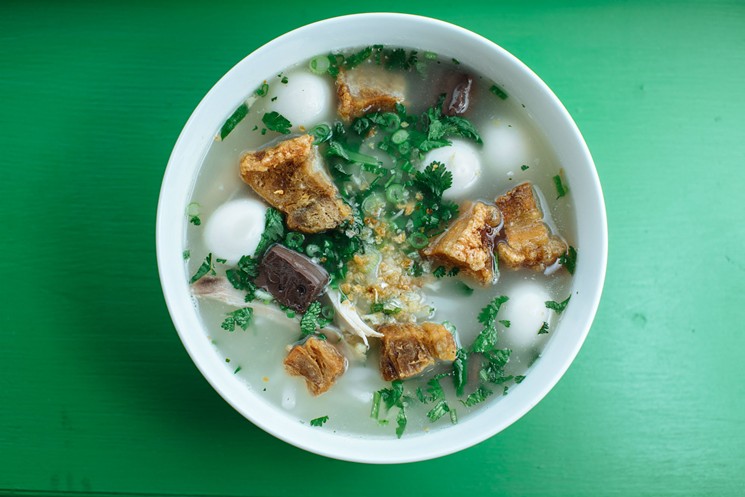 Sapp Sapp’s kowpiak “Xay-style" is a massive bowl of soup brimming with beef, crispy pork belly, cubes of pork blood, quail eggs and herbs.
Kathy Tran
The Xay in kowpiak Xay-style is Xay Senephoumy, owner of Sapp Sapp and part of a small family dynasty of Laotian restaurateurs in Irving. (His first name is pronounced “Cy”.) The family got its start down the road at Nalinh Market, a cult favorite that combines a small Asian grocery store with a kitchen serving Lao favorites such as papaya salad and spicy-sour cilantro-laced beef larb.

“It’s kind of a silly little story,” Senephoumy says. “Nalinh Market was a grocery store. A couple of my mom’s friends, who she used to hang out [with] when she first came to America, came to visit her and asked, hey, are you still a good cook? So she cooked for them when they came in, and our grocery store customers saw that and they wanted some food, too.


“She was hooking up friends on a single Bunsen burner, and then she had to go to a double Bunsen burner. And eventually the Bunsen burner wasn’t enough and we had to put in a little kitchen.” – Xay Senephoumy

At Sapp Sapp, Senephoumy experiments with new ways of presenting Lao and Thai cuisine — and his mother, Boonmie Phennara, is in the kitchen alongside him. Most of the menu consists of the foods Phennara has always prepared for her family, with minimal changes for the restaurant setting.

As Senephoumy puts it: “All the food comes from her.” He’s being modest. He does some of the cooking, too, and develops dishes drawn from his travels. But, he explains, “Everything I know, I learned from my mom in the kitchen.”

Among the specialties here: “sookie yaki,” a bowl of noodle soup that has nothing in common with sukiyaki, as it is known in Japan ($11). It sports a tangle of glass noodles, whole sprigs of cilantro, tender meatballs, fresh seafood, an egg poaching itself in the broth and a showering of the golden-fried garlic that tops many of Sapp Sapp’s dishes. There are also small portions of moke gai or moke pah ($6), curry-spiced chicken or fish steamed in banana leaves until you can practically eat the meat with a spoon. The Lao sausages ($5 for two links) are firm, flavorful and fatty without a hint of grease.

Whole fish and seafood combinations are attention-grabbers, and the staff rightfully recommends the whole fried tilapia ($12), with skin so crisp and bubbly it’s like eating thick, salty chips. The real prize, though, is the bowl of dipping sauce alongside, a combination of lime and chile peppers called jeow som. The tartness of lime lures you in, and then a host of thin Asian chiles, their seeds still floating in the bowl, ambush your taste buds from all directions. It’s the perfect sidekick to enliven tilapia, the perfect drizzle over a bowl of rice. 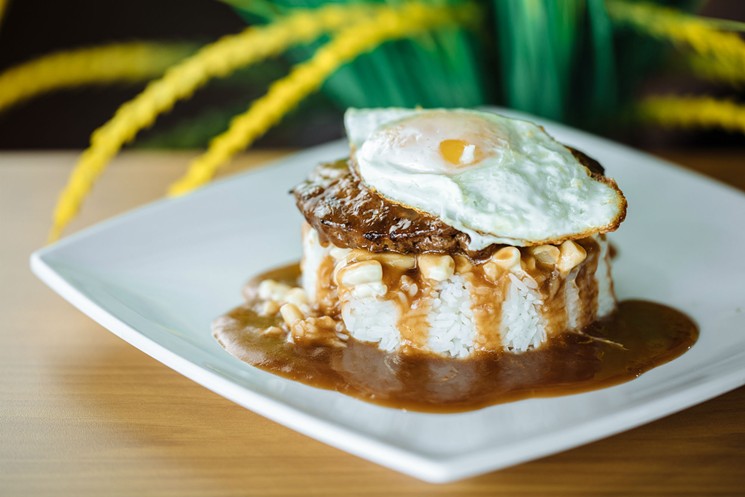 Sapp Sapp's loco moco is rice topped with a burger patty and layered with macaroni, gravy and a fried egg.
Kathy Tran
There are menu items more familiar to Texas diners — pad Thai, a range of curries, spring rolls — but, although the ones we tried were certainly fine, they aren’t the real reason to visit Sapp Sapp. On the other hand, Senephoumy’s kitchen has an intriguing sideline in an unlikely and, in Dallas, rare cuisine: Hawaiian food. Spam musubi ($4) is as respectable an appetizer here as the barbecued pork, and the loco moco — a mound of white rice topped with a burger patty, layered in creamy macaroni, slathered with gravy and crowned with a fried egg — is Senephoumy’s favorite dish ($7, $9 for double meat).

He found Hawaiian food during a part of his life spent hanging out with California surfers.

“People love meat in Texas; people love barbecue,” he says. “There’s no way they’re not going to like the loco moco.” Yet only a tiny handful of Texas restaurants serve it.

For many of Sapp Sapp’s new regulars in Irving, the restaurant is an education. It is a window, first, into the culture of Laos. The country is overshadowed, in American minds, by neighbors Thailand, Vietnam and China.

Sapp Sapp's shrimp rolls, dubbed "Shrimp in a Blanket," will be more familiar to Texas diners.
Kathy Tran
“We’ve been doing a good job of easing customers into it and gaining their trust a little bit," Senephoumy says. "They tend to say that the pad Thai, the spring rolls, the common stuff is better than other places, and then they trust us when we recommend different things.”

Here’s just one of Sapp Sapp’s lessons: Don’t pigeonhole a cuisine. Like its terrific bowl of pho, for instance. Pho might be Vietnamese, but it’s Lao, too. Culinary borders are far more porous than political ones, and Laos freely adapts its neighbors’ foods. The Sapp Sapp kitchen is testing more bowls of pho, such as a traditional preparation with oxtail, for future menus.

And then there’s the item that will probably become this restaurant’s Instagram-famous signature: the loaded bowl of pho topped with an entire beef rib ($14 with regular-sized rib, $18 for a “Big Daddy Bone”). It might sound like Texas barbecue fusion, the product of too many trips to Pecan Lodge. But beef rib pho is a traditional family recipe, too, another of Phennara’s home-cooking staples. The rib is stewed separately before serving, so the meat doesn’t fall off into the soup.

“We grew up eating them,” Senephoumy says. “As kids, we would save the best for last. We would eat the pho and just gnaw on the bone.”

Soon, Irving diners will be doing the same.