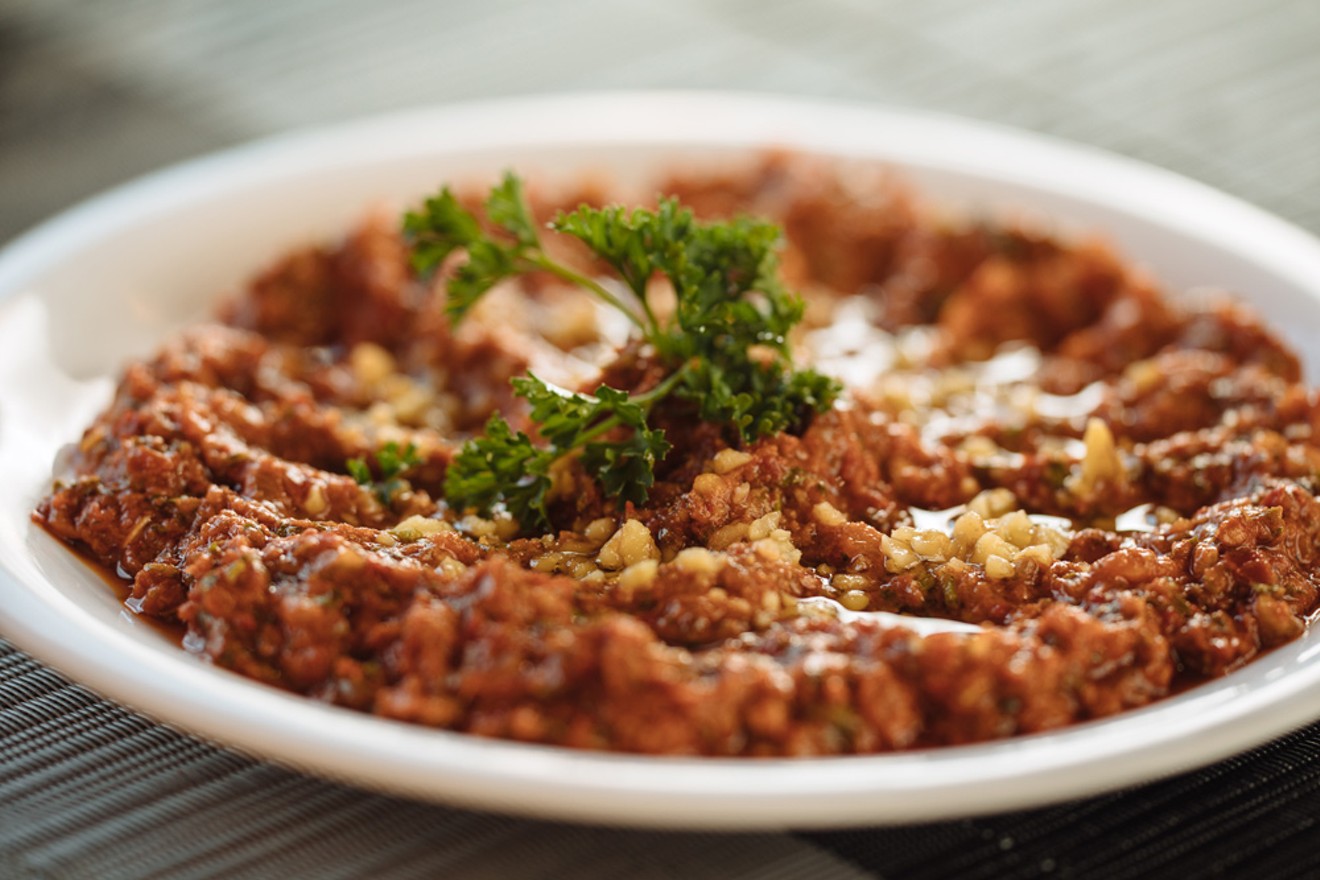 It’s called ezme. It’s spicy, garlicky, acidic and sweet-sour, a lightning bolt to the taste buds. At Tantuni Mediterranean Grill, the newest Turkish restaurant in Richardson, ezme arrives with bread in a small bowl, looking a deep, arresting red. Some of the waiters call it salsa. To prepare ezme, all the ingredients are hand-chopped with a cleaver — tomatoes and tomato paste, garlic, onions, parsley, hot red peppers — and mixed with olive oil, lemon juice and, for a little bit of sweet-sour verve that kicks the whole dip far outside the ordinary, some drops of pomegranate molasses.

Ezme is, of course, not new. It’s been a Turkish culinary tradition for ages, a beloved national appetizer. The spicy, bright, gently tart dip hasn’t taken over the world yet, but it will soon enough, especially if every restaurant’s version is as good as Tantuni’s. On our first visit, I couldn’t resist devouring more ezme even after declaring myself full and putting the rest of my main course in a to-go box. 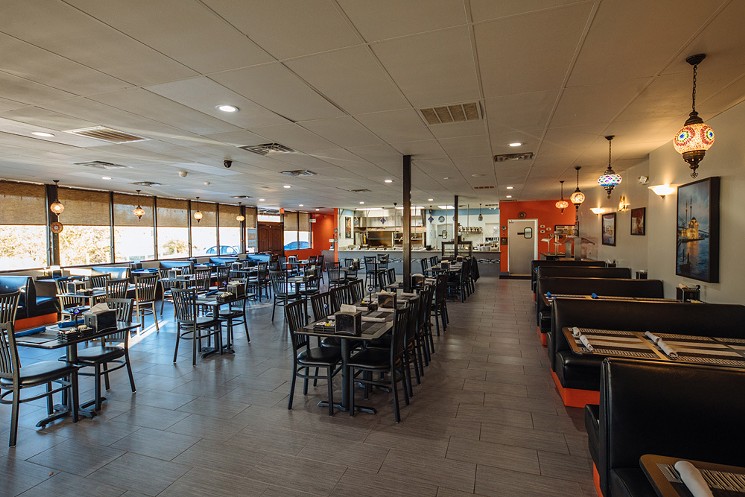 With that kind of experience in Kara’s background, it’s perhaps no surprise that Tantuni has more or less immediately become Dallas’ best Turkish restaurant. Compared with many of its rivals, the dining room is notably more casual, less desperate to impress; the menu is unapologetically region specific; and the food is consistently satisfying. 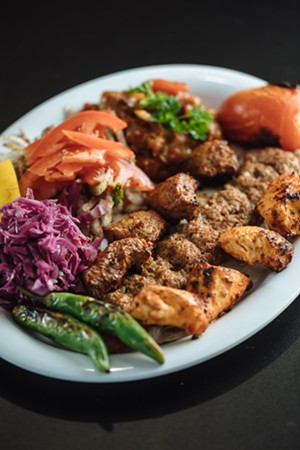 Tantuni’s kebabs are all grilled over charcoal.
Kathy Tran
What should a first-timer try? After polishing off some ezme ($6, though a small bowl often simply appears), there’s no finer main course than the Adana kebab ($15), named after the Mediterranean province from which it comes, less than 40 miles from the Syrian border in Turkey’s southwest. Tantuni’s kebabs are all grilled over charcoal — the grilling station is open to the dining room, just behind the buffet line and in front of the kitchen — and in the Adana kebab, ground lamb is blended with parsley, finely diced onions and so much red pepper that the lamb’s juices bleed a thrilling orange onto the plate.

The kebab’s sides are formidable, too: white onion slices tossed with sumac and parsley, a vinegary red cabbage slaw and rice pilaf so buttery that it tastes as soft as clouds. The trick to good rice pilaf, as many a Turkish home cook knows, is to add plenty of cooking liquid and enough butter to bake a dozen cupcakes.

There are more goodies, too. A lamb shank ($15) arrives bathed in tomato broth and on top of good mashed potatoes whipped with copious black pepper. The lamb is richly flavorful and tender without falling off the bone. Iskender kebab is a similarly oversized bounty of meat and starch ($17), featuring doner (gyro) meat atop a bed of bread cubes, with two contrasting sauces: cooling yogurt and peppy tomato. Exercise caution when sampling the grilled peppers that garnish some dinners: Many are sweet and smoky from the grill, but on one visit, my friend chomped down a whole pepper in one bite, coughed and announced that it was a jalapeño.

A good meal could be had, though, simply by sharing a few appetizers. Reach for the ezme, certainly, and Tantuni's short, round, sesame-covered loaves of bread; ask for haydari ($6), a concentrated yogurt dip flecked with parsley and weapons-grade garlic; dig into the excellent Tantuni pies, small pastry turnovers filled with spinach and feta ($5); sample grilled slices of sujuk, the gently spicy Turkish sausage with cumin, garlic and red pepper. I would comment on the crispy-fried feta rolls, thin pastries known in Turkey as cigars, but we enthusiastically devoured our $7 order without pausing to reflect on it. 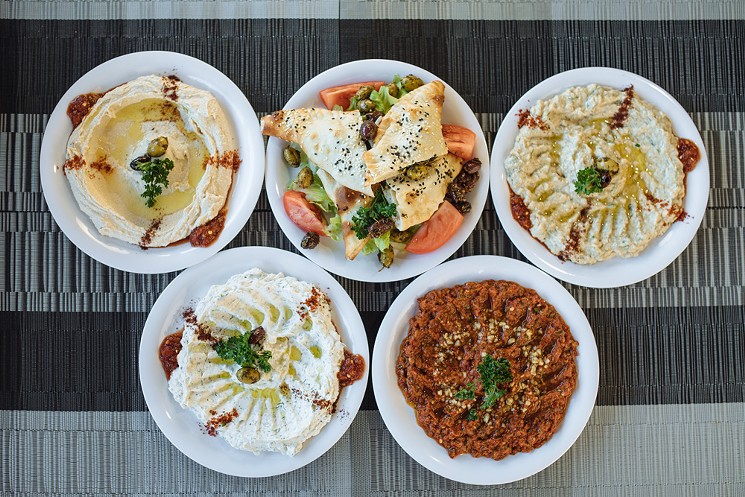 Meze: (clockwise from left) hummus, tantuni pies, baba ghanoush, ezme, haydari
Kathy Tran
One thing that didn't catch my fancy: the pide, or Turkish pizzas, which are shaped like long, wide canoes of dough filled down the center with cheese and other toppings. There are better pide at other Dallas restaurants. The Tantuni rendition is a little doughy, doesn't get crispy on the bottom and often suffers lackluster fillings, like a scattering of sausage in a mozzarella bath ($13).

Making matters more confusing, the menu doesn't distinguish between the two very different Turkish styles of flatbread. Turkish-Americans and in-the-know diners will recognize why some of the "flatbreads" are $4 and some are $13, but the vague descriptions won't help newcomers understand that pides are rustic main courses but lahmacun, for instance, is practically a snack.

If the pizzas are a little lackluster, that flaw is not enough to get me down on Tantuni. There are too many other good orders, and Dallas' Turkish food scene is still underdeveloped. Laili, the endearing farmers market stall, closed its second location in Plano; two of the restaurants featured in our Turkish pizza guide have since closed; and my most recent visit suggested that Pera Turkish Kitchen, long the gold standard, is suffering from quality control issues as the business expands to newer, more casual locations. 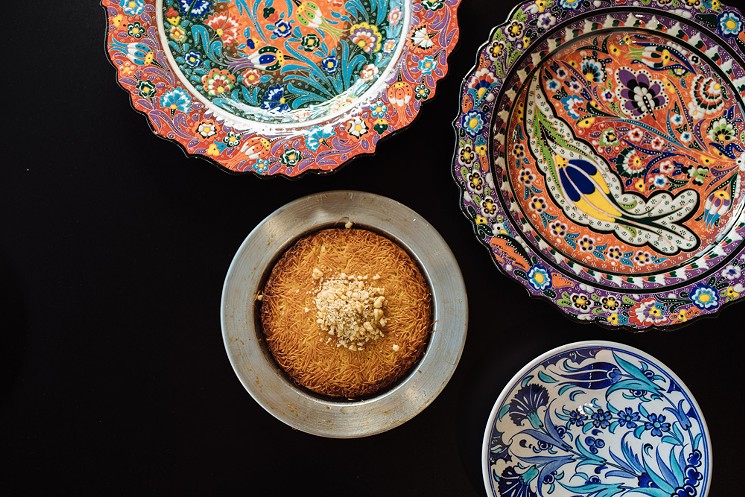 Kunefe dessert
Kathy Tran
In that context, Tantuni Mediterranean Grill starts to look like the best option in town, but that's not just a backhanded compliment. Tantuni's charcoal grill beckons with the promise of great Adana kebab. Its meze are superb. And if anyone wants to know where to find this food critic in the months to come, I'll be hunched over a basket of sesame-studded bread with a bowl of that addicting ezme, dipping away until it's gone.