Windmills Is a Brewery, Indian Restaurant, Jazz Lounge, Library and Almost Everything Else

And that’s not even half the story at Windmills, the Dallas area’s most eclectic new venue for eating, drinking and, well, everything else. Windmills is a craft brewery, jazz club, Indian restaurant, art book library, cocktail bar, steakhouse and picnic spot all packed into one building which declares itself, accurately, a “Total Environment.”

This restaurant is trying to be a million things at once, and it mostly works. A lot of good food and beer gets served in a mesmerizing space.

The main dining room is a concert venue floor with a balcony, bar and a wide stage with a Steinway and, along its sides, shelves full of both real and decorative books. On one side of the balcony, a row of windows looks out into the brewery’s production space.


The lower dining area has more bookshelves, this time with all real books, many of them coffee-table art volumes and high-dollar cookbooks from the world’s swankiest restaurants.

One day, I swung by the bar for a snack and a pint and became absorbed in the library, picking up still-shrink-wrapped volumes on Nordic baking and Mexican haute cuisine, wondering if I was allowed to open them. (I asked; the answer is yes.)

If you find yourself with some time to spare at Windmills, help yourself to the library.
Alison McLean
On the main floor, the tables are arranged in diamond-shaped booths, so when a show’s on everyone can crowd around one side to watch. When there’s no live performance on, prepare to be serenaded by one of the most eccentric playlists in Texas. Windmills’ stereo cranks out hit after hit from past decades, from a collection that might be called “Mostly Latin Retro Bops” or maybe “Songs My Hippie Elementary School Teacher Played During Reading Time.”

There are more details to be admired about this space, too, like the slatted ceiling, sound-absorbing tiled walls, wide-angled view overlooking an artificial lake and stylish drink coasters. The whole building is putting on a show.

“I feel like I’m in a cruise ship dining room,” a friend told me, taking it all in. Then we looked at the menu, presented on an iPad, and he changed his answer: “No, this is more like Epcot.”

As a bizarre flutey instrumental cover of “Raindrops Keep Fallin’ On My Head” came over the sound system, it was time to order.

Windmills’ beer is, across the board, pretty darn good. I most enjoyed a mild, medium-dark, slightly sweet Mexican lager — compare it to Victoria or Bohemia — and a pale ale that’s gently bitter, hoppy but easy to drink. The saison’s pretty good, too, and friends said they enjoyed the coffee porter, which manages to taste strongly of coffee without sacrificing the fact that it’s meant to taste like beer. 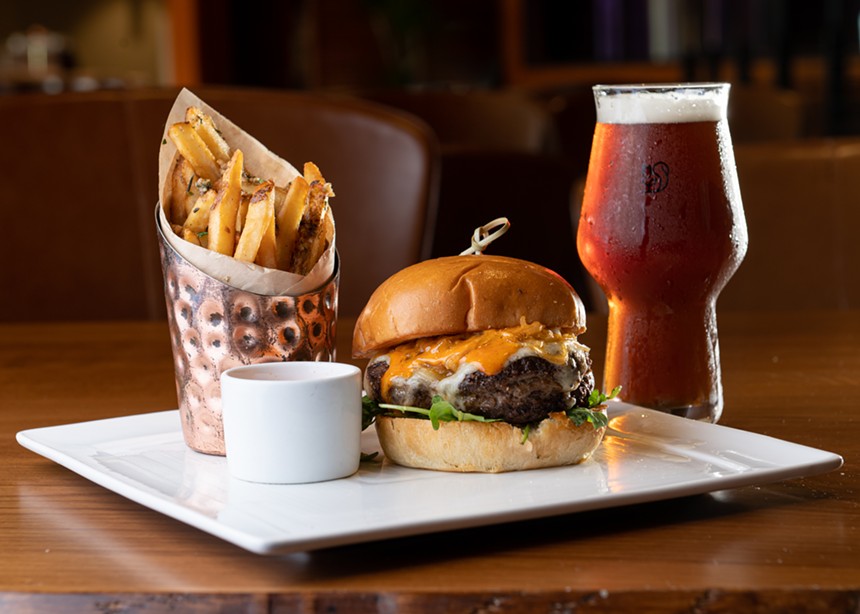 The Wagyu burger topped with a chili pepper sauce
Alison McLean
A beer helps when contemplating the food menu, which is long and full of surprises. There are South Asian classics — chaat, grilled kebabs, kulfi — and Texas classics — big steaks, queso, brisket-stuffed jalapeños— in equal measure. There’s a burger topped with chile pepper sauce and a chicken kebab with guava glaze.

As with so many Dallas-area restaurants, all the most fun dishes are starters and snacks. Everyone ordering a beer should pair it with kulcha, the super-thin stuffed flatbreads. Windmills has several varieties, including Parmesan and green chile kulcha for spice lovers; so far our favorite folds ground beef and spices into the bread ($13). Topped with an outrageous amount of black sesame seeds, it’s a pint’s perfect partner.

Lamb seekh kebabs marinate with Kashmiri peppers before going on the grill ($17). The ground lamb is cooked through, but still tender, served with light green raita and a lightly pickled salad of red onions and carrots. There’s nothing like a refreshing red onion on a spiced bite of meat. 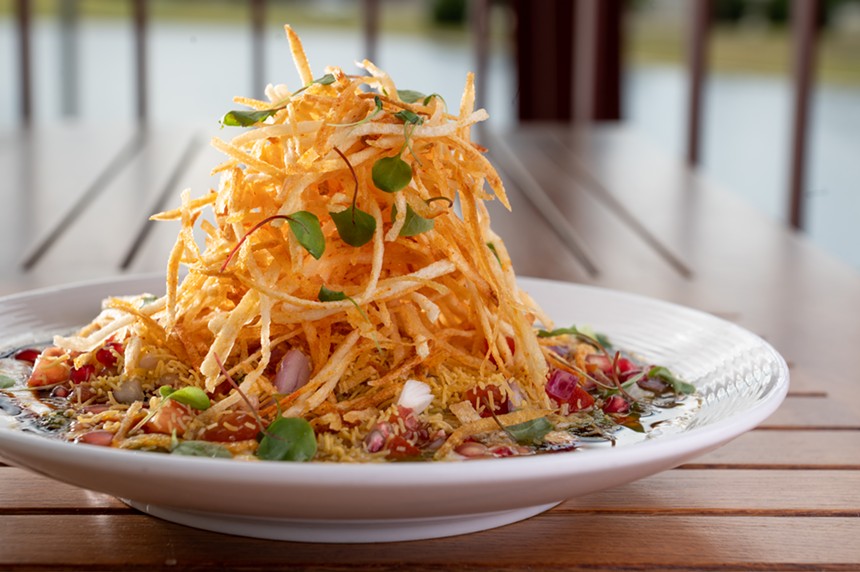 The towering potato tikki chaat is a creative execution of the classic street snack.
Alison McLean
Even better is potato tikki chaat, a beloved street snack loaded with flavors ($11). I’ll describe it from the top down. First and most visibly there’s a party of crisp fried potato strings, then under that swirls of tamarind and mint chutney and around the sides is a cooling moat of yogurt. Dig in to reveal diced red onion and tomato, pomegranate seeds, fried chickpeas and, deep down at the bottom of the plate, a spiced potato pancake. It’s perfectly executed pandemonium.

We were more divided about the Kerala beef fry, a stir fry of sirloin, slices of coconut, shallots and curry leaves served on a coiled flatbread ($17). I kept sneaking bits of the meat, which was seasoned until nearly red, while avoiding the dry, chalky pieces of coconut.

Main courses range from chicken fried steak with duck fat gravy to moilee, a Portuguese-Indian seafood stew. We tried the vegetable kofta, an enormous fritter of carrot, potatoes, other veggies and spices which is cut in half and plated like two twin peaks rising over a pool of sauce ($21). That sauce is creamy and buttery but also loaded with smoked and pureed tomatoes, a tangy, uncommon combination.

Our server was very excited about the lamb chops. In fact, he was genuinely and justly excited about everything, but the chops were as advertised, full-flavored, perfectly cooked and delicious ($36). The plate’s other two elements were acquired tastes, though: a sweet tamarind glaze on the lamb and a “khichdi risotto” of rice and lentils that had turned dry and starchy.

But the successes on Windmills’ menu clearly outweigh the failures, and there’s much more to try. I’m only now noticing that they have a Hill Country potato salad to order with kebabs. All the food shows off the range and quality of Windmills’ beer.

When we sat at a booth one Saturday at lunchtime, our server told us that live music was starting that night at 9:30, then suggested we stay to watch. (In fact, many customers book tables for live shows in advance, reserving specific seats like in a concert hall.)

Still, in the moment before we realized that nine more hours at our table would be ridiculous, I looked around at the tanks full of beer, shelves full of books, plush booths and easy chairs, lake outside and menu of snacks, and I thought, yeah, we might stick around.

Windmills, 5755 Grandscape Blvd., The Colony. 972-777-6770, windmills-usa.com. Open Sunday through Thursday 11 a.m.-10 p.m., Friday and Saturday 11 a.m.-11 p.m.
KEEP THE DALLAS OBSERVER FREE... Since we started the Dallas Observer, it has been defined as the free, independent voice of Dallas, and we'd like to keep it that way. With local media under siege, it's more important than ever for us to rally support behind funding our local journalism. You can help by participating in our "I Support" program, allowing us to keep offering readers access to our incisive coverage of local news, food and culture with no paywalls.
Make a one-time donation today for as little as $1.