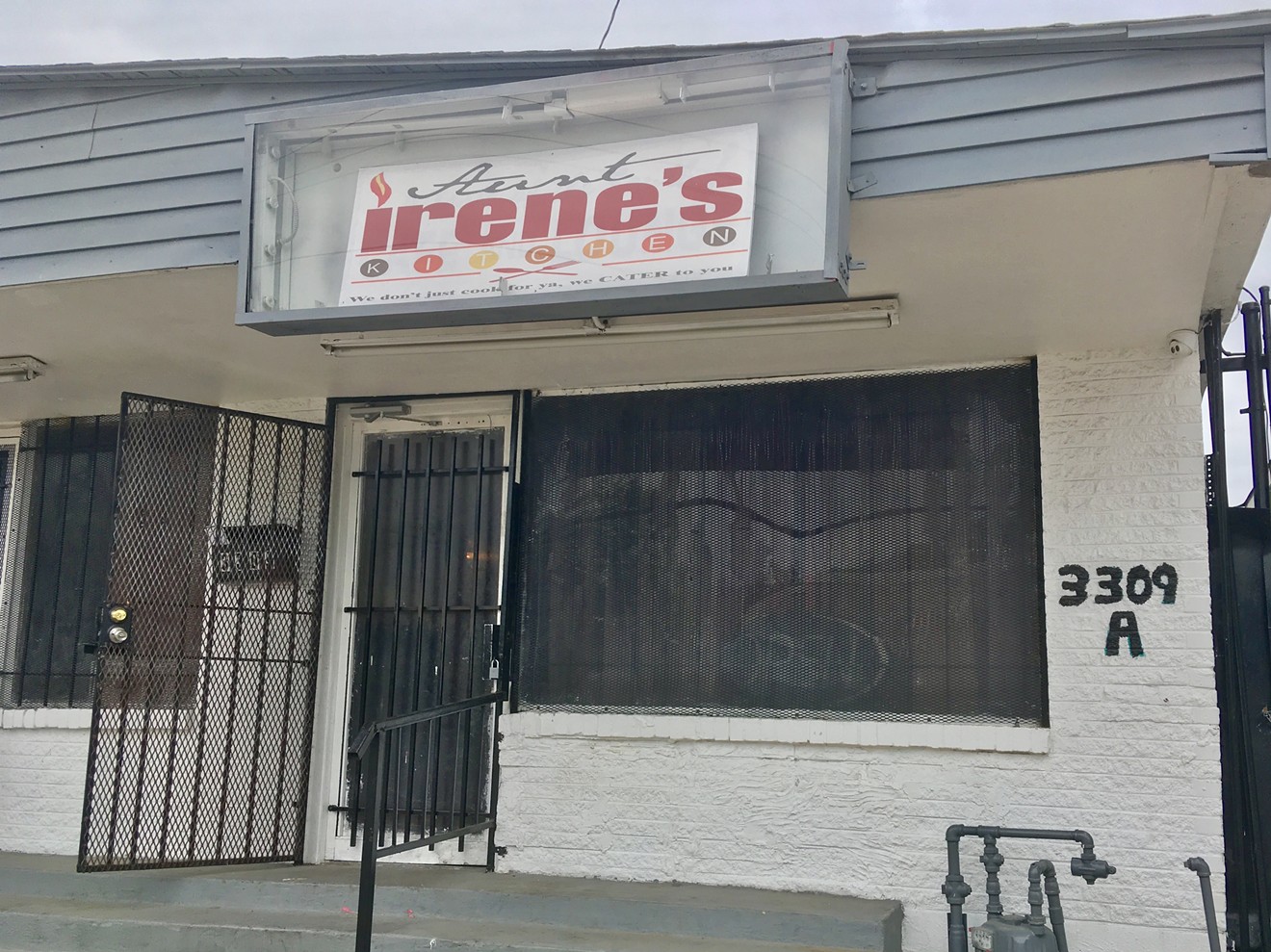 Aunt Irene's Kitchen is drawing long lines of diners to a former auto shop. Amanda Albee
It is possible that Dallas’ most popular restaurant is one you haven’t heard of yet. If you're using social media as a metric for popularity, Aunt Irene's Kitchen, a restaurant where food is ordered through a window, is doing quite well for itself with more than 50,000 Instagram and Facebook fans. That’s a lot for a place that opened in November of last year.

On most days, there’s a huddle at the door before it opens, and on weekends, people stand in line for an hour or more in hopes there’s still some left by the time it’s their turn at the window. This wonderland is not in swanky Uptown, trendy Bishop Arts or any other restaurant row of Dallas, and the chef was a customer service rep at T-Mobile six months ago.

This sensation is known as Aunt Irene’s Kitchen. After the City of Dallas told Dresha Harrison she needed a permit to sell her Cajun seafood boils outside, a land-owning friend helped by converting his mechanic garage into her first official location on South Malcolm X Boulevard. In addition to parking lot boils, Harrison got her start by cooking church dinners at Beginners Baptist Church. Once she cooked there, catering orders started coming in. She then launched a delivery service on the side using Sign Up Genius. 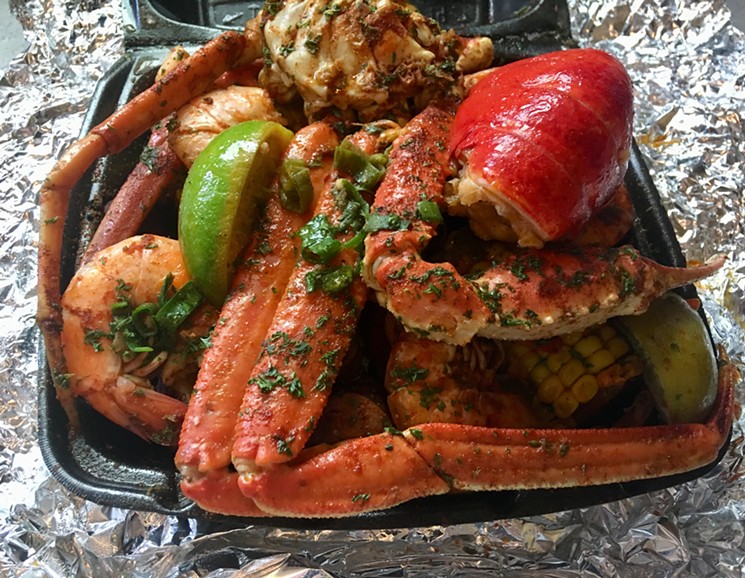 The lobster box at Aunt Irene's Kitchen
Amanda Albee
She calls her seafood boils “Galveston-style” because that’s where, on weekend trips with family, she learned how to season 100-quart pots of crustaceans. Her method goes beyond simply cooking crab in a spicy pot, though. At Aunt Irene’s Kitchen, every individual item down to the potatoes is hand-seasoned again after cooking in Harrison’s delightfully piquant spice mix and finally dressed with green onion, parsley, limes and more spice mix. Did we mention there’s butter?

There are also pork chops, fried catfish and chicken wings, along with daily specials like seafood gumbo and seafood pasta. Harrison believes the best thing she makes is her seafood potatoes — a cheesy mash loaded with chicken, shrimp, crabmeat and crawfish tails, available only on certain days.

The dish that made Aunt Irene’s famous and is still by far the most popular is the $24 Black Box — a to-go container stuffed to the brim with snow crab legs, shrimp, andouille sausage, corn on the cob and red potatoes. For $16 more, you can get a lobster tail with that. Add another $15 and your box is extra large. Due to her regard for quality, Harrison is often forced to continue her trips to Galveston, where she knows she can still buy good, affordable crab legs. 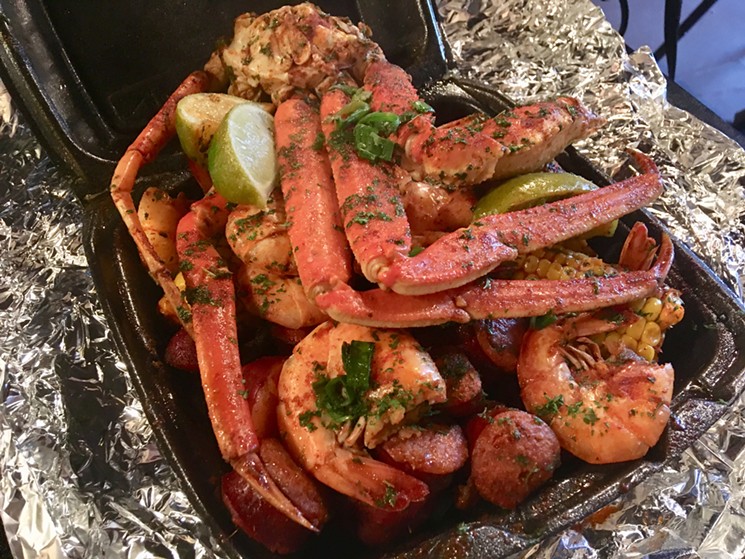 Aunt Irene's famous Black Box
Amanda Albee
For dessert, there are fluffy butter pecan cookies known as “crack cookies.” They are the creation of Marcelina Olan, owner of Pretty Tasty Cakes & Pastries. A fellow expectant diner explained that they’re like eating butter pecan ice cream in cookie form. The only way to find something more buttery would be to dig directly into a tub of it.

Harrison named her restaurant after the woman who raised her: her mother’s great aunt, Irene. Harrison’s mother was 16 years old when she had her, and as Harrison explains, was not prepared to care for children. So Aunt Irene stepped in at 70 years old to help out. It was Aunt Irene who showed Harrison the love of cooking for the church and their community in Greenville.

“The most important thing she taught me,” Harrison says, “was how to be a lady.”

An old family photo of the late Aunt Irene with Harrison and her little brother Nick hangs to the left of the order window now at Aunt Irene’s Kitchen. There’s plenty of time to take a moment to honor the legendary lady and all the women like her while waiting in line for some of Dallas’ best new seafood.

Aunt Irene's Kitchen, 3309 S. Malcolm X Blvd. (South Dallas)
KEEP THE DALLAS OBSERVER FREE... Since we started the Dallas Observer, it has been defined as the free, independent voice of Dallas, and we'd like to keep it that way. With local media under siege, it's more important than ever for us to rally support behind funding our local journalism. You can help by participating in our "I Support" program, allowing us to keep offering readers access to our incisive coverage of local news, food and culture with no paywalls.
Make a one-time donation today for as little as $1.
Amanda Albee
Contact: Amanda Albee