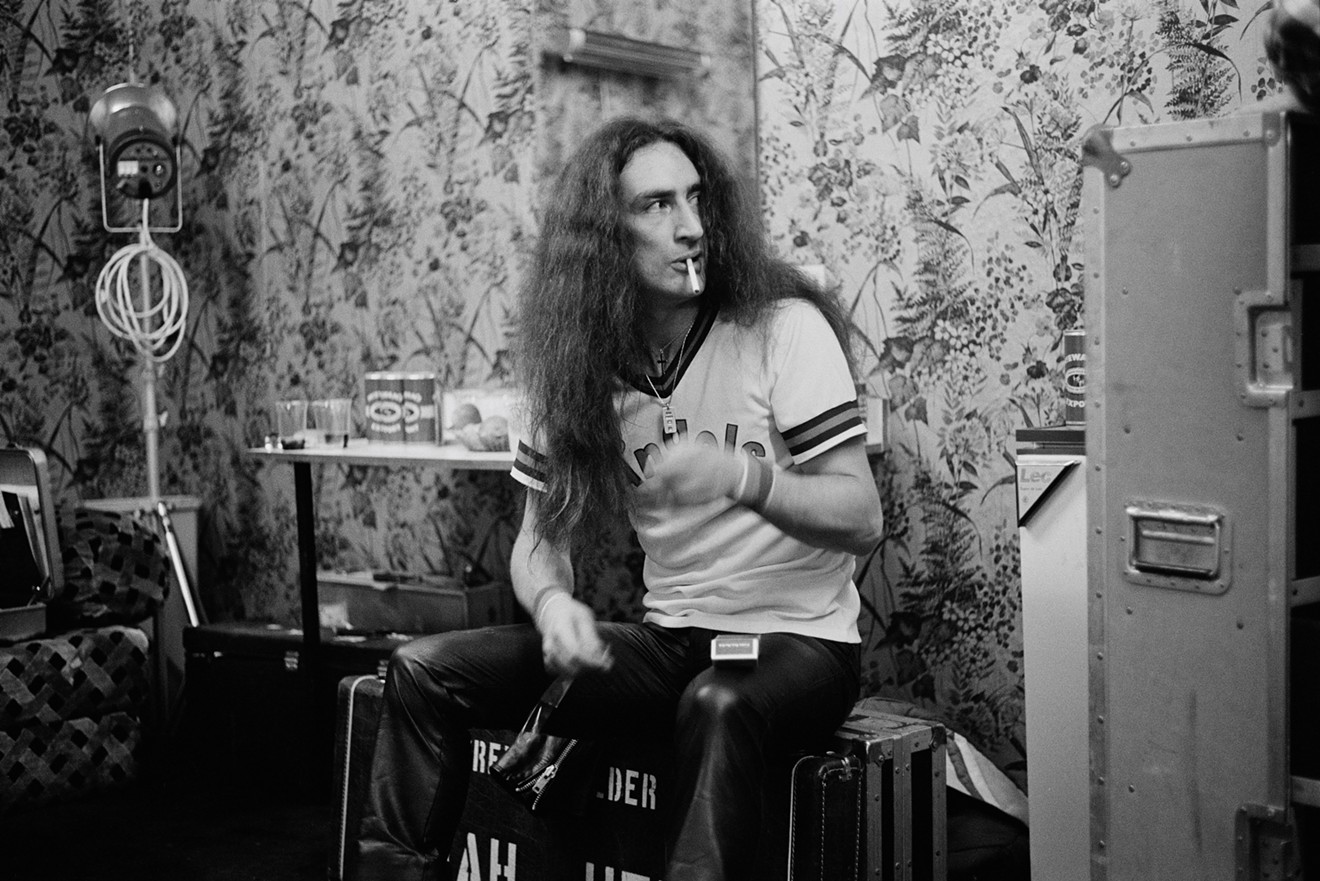 Ken Hensley from Uriah Heep was the architect behind most major pillars of heavy metal. Fin Costello/Getty

On Nov. 4, news broke that former Uriah Heep keyboardist Ken Hensley died suddenly from a short illness at the age of 75. This came less than two months after the passing of the band’s drummer Lee Kerslake from cancer at 73.

While it is technically true that Hensley was the band’s keyboardist, reducing his legacy to “the keyboardist” would be like calling Robbie Robertson “the guitarist” for The Band or Rostam Batmaglij “the keyboardist” for Vampire Weekend. During his tenure from 1970 through 1980, Hensley wrote or co-wrote nearly all of the band’s songs, played fluid and razor-sharp slide guitar and acoustic rhythm guitar, sang lead vocals on several songs and wrote the liner notes for the band’s records. When he was behind the keyboard, he conducted a sonic army that formed the basis for the band’s most celebrated sound.

On the inner sleeve of their 1974 Live album, press clippings of the band serve as a mosaic of liner notes, from an initial review of the band’s debut in which the reviewer infamously stated “If this group makes it, I’ll have to commit suicide” to a more accurate reassessment by another critic two years later stating “The sound comes at you like a panzer, doing 80 …”

Perhaps it was this persistent, krautrock-like quality of Uriah Heep’s music that maintained their popularity in Germany, Russia and other parts of Eastern Europe, where the current incarnation of the band led by founding lead guitarist Mick Box continues to experience great levels of success even after Hensley’s departure in 1980.

With the deaths of Hensley and Kerslake, this makes Box the sole surviving member of Uriah Heep’s “classic” lineup.

After Hensley’s death, Box posted on his website in tribute: “His communication through lyrics and melody have stood the test of time, and with the power and chemistry of the band bringing those songs to life, we achieved success we could only have dreamed of.”

I once had an argument with a couple of friends as to whether bands like Uriah Heep and UFO counted as true “heavy metal.” My stance continues to this day that they absolutely do, as they exemplified Anaya’s five pillars of heavy metal (aggression, speed, darkness, sludge and power) at one point or another, if not all at once. Even when stepping outside the musical qualifications of heavy metal, Uriah Heep brought rock 'n’ roll to a level of sonic grandeur that few bands that weren't Led Zeppelin ever came close to achieving, and Hensley was the mastermind behind it all.

Without Hensley, Iron Maiden certainly would not have existed, Deep Purple would not have had the inspiration to amp up their sound, the keyboard/organ would likely have struggled to find its place in the realm of heavy metal (if the genre had even bloomed beyond Black Sabbath at all, especially considering that Kerslake later joined Ozzy Osbourne’s solo band and played drums on “Crazy Train”), and dozens of vans in the '70s would have gone unpainted with the artwork of Demons & Wizards on the side. Every metalhead owes their life to Hensley, the architect of a major pillar of heavy metal.

“Easy Livin’,” Demons & Wizards (1972)
Power does not always equate to speed or aggression, but it certainly does here. Uriah Heep were never more powerful than they were on “Easy Livin.’” In two-and-a-half minutes, the band laid the blueprint for Iron Maiden’s entire career. Whereas Iron Maiden would later substitute a two (later three) guitar attack, the frontal assault of “Easy Livin” is Hensley’s organ in stampeding lockstep with Box’s guitar, Kerslake’s drums and Gary Thain’s bass. David Byron’s ghostly and operatic vocal performance is unmistakably Bruce Dickinson-esque. “Easy Livin’” is the only Uriah Heep song to have ever cracked the top 40 of the U.S. Billboard Hot 100, peaking at no. 39.

“July Morning,” Look at Yourself (1971)
Hensley ventured into long-form songwriting several times during his tenure with Uriah Heep — “Salisbury” and “The Magician’s Birthday” being two other notable examples — but none came close to the epic pastoral communion that concluded the first side of the band’s third album, Look at Yourself. “July Morning” is at once tranquil and tortured, with Hensley’s chilling opening organ riff serving as a kind of metallic adhan. The song displays the full variety of Uriah Heep’s emotional palate, evoking devotion to mourning to ultimate catharsis with Hensley’s nearly five-minute organ dirge — that doesn’t meander so much as it ascends — giving guest synthesizer player Manfred Mann room to squeal and spiral out of heaven. In fact, “July Morning” has inspired an annual Bulgarian midsummer festival of the same name in which thousands of people gather on the coast of the Black Sea in order to witness the first sunrise of July.

“Lady in Black,” Salisbury (1971)
“Lady in Black” might only have two chords, but it also has 279 words. Supposedly inspired by a beautiful woman Hensley saw outside his hotel window, the rest of the band did not like the song, finding it too folky; Bryon outright refused to sing it. Encouraged by producer/manager Gerry Bron, Hensley sang the song himself, making it his lead vocal debut on a Uriah Heep album. “Lady in Black” was released as a single and became their biggest hit in Europe — and remains their signature song to most audiences around the world.

“Gypsy (Live)," Uriah Heep Live (1973)
The opening track on Uriah Heep’s debut album has served as a sort of thesis statement for the band’s classic sound, but the extended 13-minute rendition from their first live album is a Uriah Heep from hell. Hensley’s show-stopping organ/Moog solo is more or less free of wankerous virtuosity and more of a battle between the instrument and the instrumentalist. For the first half of the solo, it sounds like Hensley is murdering his organ, and in the second half it sounds like his synthesizer is murdering him. Kerslake and Thain provide a jazzy battledrum-and-bass backing for the duel, as Hensley wrangles his keys into doing his bidding.

“Circle of Hands,” Demons & Wizards (1972)
“Circle of Hands” is possibly Byron’s greatest performance as a vocalist and undoubtedly one of Hensley’s best as a songwriter: “Searching my land for an enemy, came across love’s sweet cost, and in the face of beauty, evil was lost … sacrifice, the future has its price, and today is only yesterday’s tomorrow.” According to Hensley, the song’s title was inspired by a séance that he was invited to by two Italian groupies while on tour. “While someone was moaning and groaning about summoning dead spirits, I was halfway to heaven and grabbed the title as soon as it came into my head, wrote the Hammond riff at sound check the next day and there you go,” he once said.

“Rain,” The Magician’s Birthday (1973)
It’s always amazing when a band — especially one whose signature sound is one of aggression and power — strips everything back to just two parts: voice and piano. Most artists would have been tempted to slather the song in orchestration or effects, while on “Rain,” the only supplementary instrumentation is a dash of vibraphone and organ deep in the mix. “Rain” is the only song that perhaps matches “Circle of Hands” as Byron’s finest vocal moment. “David kills on a whole bunch of my songs and that´s one reason I miss him so much,” Hensley recalled. “He was the best conduit for my words and melodies, and I still think about him, his favorite words and notes, whenever I write those kinds of songs.” Of the moment he composed the song, Hensley said this: “We took a break from recording to go out to dinner. When somebody opened the front door, I said ‘No thanks ... I am going back down to the piano, drink a couple of beers, and I will see you when you get back.’ When they got back, the song was done and it began ‘It´s raining outside,’ which was precisely why I didn´t go out to dinner.”

“One Way or Another,” High & Mighty (1975)
Hensley shares vocals with bassist John Wetton (at the time formerly of King Crimson and later of Asia “Heat of the Moment” fame) on the funky opening track to the band’s underrated and transitional High & Mighty album. “One Way or Another” was the first sign that Uriah Heep was feeling the pressure to keep up with younger bands like Blue Öyster Cult, UFO and Roxy Music — many of whom were inspired by Uriah Heep’s early works. While the band was going through an artistic rebuilding, internally, it was the beginning of the end. The band decided to fire Bron as their producer, and Byron’s alcoholism had become debilitating. Hensley was tasked with producing the sessions in addition to his already numerous roles within the band. “No one besides me had any songs, and they preferred to spend their spare time in the pub,” Hensley later said of the High & Mighty sessions. “John Wetton showed up when he wasn´t busy with Bryan Ferry so, for me, it was like another solo album, and I made the most of it. You can´t listen to this as a Heep album because it isn´t one.”

“Paradise/The Spell,” Demons & Wizards (1972)
Originally two separate tracks, the pair were fused during the mixing of the album when Hensley realized their similar subject matter and decided to unite them with a tape-phasing effect pinched from The Small Faces’ then-recent hit “Itchycoo Park.” Lyrically, Hensley analyzes a dying relationship from two perspectives: one lamenting and regretful, and the other jubilant and liberated. When united, the songs create an epic prog suite that climaxes with a pitch-perfect slide guitar solo played by the composer himself. Hensley claimed that the composition of the song’s music was an “accident” and went on to say that some of his most inspired writing came from a place of non-effort: “I write best when I am not trying, or when I am not intending to, or supposed to be, writing. I set my acoustic to a semi-open tuning, played a few nonexistent and extremely wrong chords and went from there. I still do that, and I still enjoy breaking all the rules, especially musical ones.”
KEEP THE DALLAS OBSERVER FREE... Since we started the Dallas Observer, it has been defined as the free, independent voice of Dallas, and we'd like to keep it that way. With local media under siege, it's more important than ever for us to rally support behind funding our local journalism. You can help by participating in our "I Support" program, allowing us to keep offering readers access to our incisive coverage of local news, food and culture with no paywalls.
Make a one-time donation today for as little as $1.