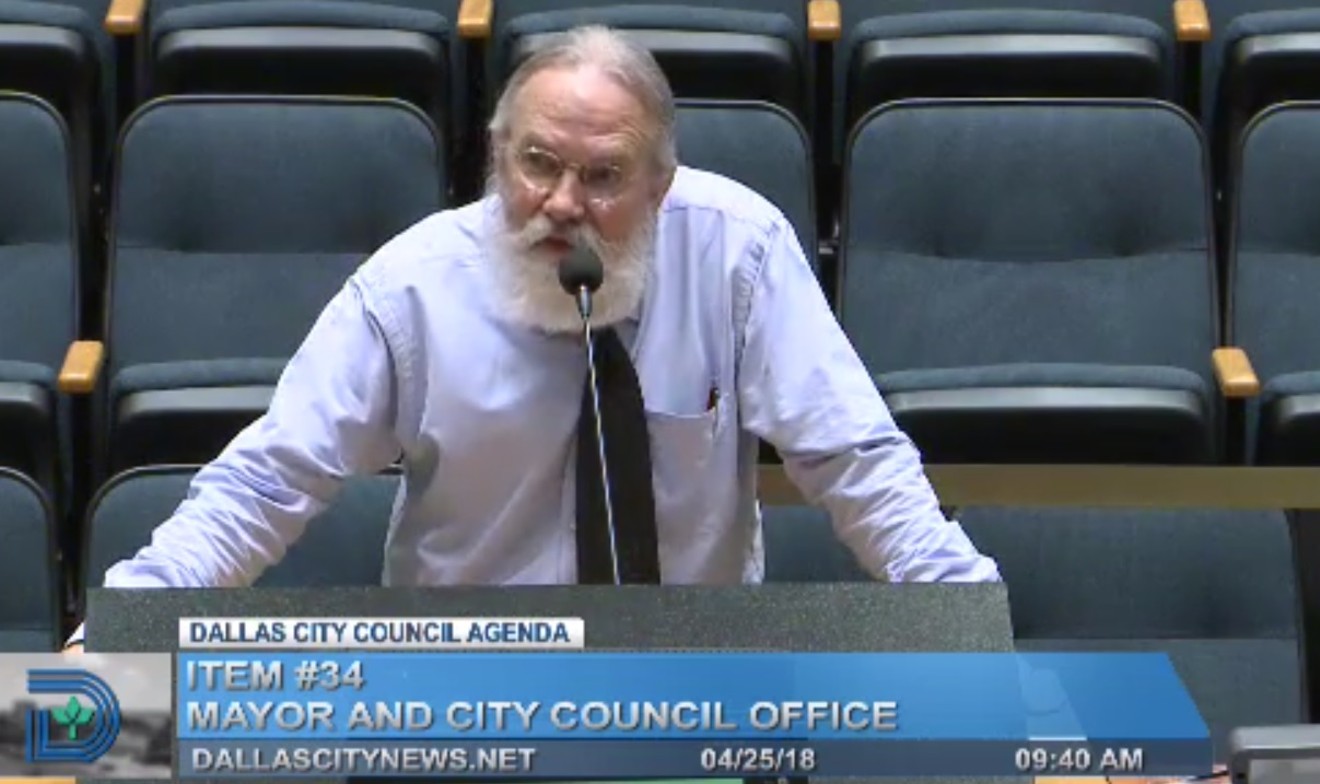 Community organizer and civil rights activist John Fullinwider asked, "Who are we in Dallas? I mean for real." dallascityhall.com
A lot of side-of-the-mouth talking took place during this week’s Dallas City Council debate on removal of the shabby Confederate war memorial next to City Hall, but let’s not lose sight of the big thing: The vote to keep that ugly monstrosity in place was led by three of four black members of the council.

Three of the city’s four black council members effectively sided with dozens of pro-Confederate speakers from the audience and led the council to vote to suspend a yearlong process to remove the memorial. Yes, they said all kinds of stuff about why. But it’s important to focus on what happened. Although the council voted a year ago to take it down, the Confederate war memorial next to Dallas City Hall survives because a majority of black council members saved it from demolition with their votes.


“Let’s follow the better angels of our nature today. Let’s lift each other up, and let’s take these god-awful statues down.” — John Fullinwider

The big lesson here is that dealing with the city’s Civil War legacy and history of white supremacy is not something that can be left to our local elected back leadership. A majority of the black council members proved with their votes this week that they, as individuals, are not capable of dealing with these questions honorably or intelligently.

One black council member spoke eloquently and passionately against the turnaround. Among the public speakers who urged the council to proceed with removal were several African-Americans.

I am saying that I am not going to leave the question of removing white supremacist, racist monuments to people like the three black men on the City Council who voted this week to spare our Confederate monument. It’s my city, too. It’s my Civil War history, too. It’s my white supremacy, more than it is theirs. That hideous monument to slavery and racism next to City Hall makes me want to puke every time I see it, and I want it down, white guy that I may be.

Look, the pressure to take down the Confederate memorial originated a year ago with younger white council members anyway. They called its continued existence in a position of prominence a grisly humiliation for the city. At their instigation, the council voted last year to “remove all public Confederate monuments.”

At the last moment last year — and only in response to sharp pressure from their constituents and a demonstration by 3,000 people in front of City Hall — did the three black council members give even a weakly feigned appearance of support for the removal.

I knew it was feigned at the time because I knew what was going on behind the scenes. I didn’t say anything about it then because at a certain point, people have to be taken at their public word. But now we can take them at something even better — their vote.

A majority of the black Dallas City Council members, three of the four, threw in with neo-Confederates and others on the far right this week to preserve this ugly beacon of white supremacy. Don’t ask me why. It breaks my heart even to try to answer that question.

The speech the three black council members ignored at last Wednesday’s meeting — the one they should have listened to — was by community organizer and activist John Fullinwider, who addressed the council before the vote during a public comment session:

“You rarely get to cast a vote like the vote you are going to take today. It’s not a zoning case. This is a moral case.

“It’s not a contract. It’s not about a development district. This is about who we are.

“Let’s follow the better angels of our nature today. Let’s lift each other up, and let’s take these god-awful statues down.”


The council was considering a handful of Confederate questions — street name changes, a statue already removed but in storage — but the big one was the large, garish, crudely made array of statuary that looms above a pioneer cemetery at the crest of a small rise due west of City Hall.

The memorial is not on the site of a battle because no significant Civil War battle was fought in Texas. Texas was a center of smuggling and blockade-running during the war, but not fighting.

The United Daughters of the Confederacy put up the memorial next to City Hall in 1896, at a time when defenders of slavery and white supremacy were enjoying a bit of a comeback. That was the same year the U.S. Supreme Court delivered its infamous Plessy v. Ferguson “separate but equal” decision, providing the legal framework for Jim Crow segregation. The monument, in fact, is more a tribute to Jim Crow than to anything to do with the war.

It is crudely formed, a strange wandering amalgam of bearded men on tall plinths holding scrolls. When erected, it was exactly what it is today — a big white middle finger to the Yankees and the race-mixers.

One black council member, Kevin Felder, spoke passionately against the turnaround on taking down the memorial, calling on the city to confront its past more honestly: “We cannot forget the fact that the journey did not come without pain, lynchings, burnings, bombings, and it continues to this day.”

Thomas said he wanted yet another task force to study the removal question, even though the question has been submitted to that painful process once already. He said something about “people with more historical knowledge,” a truly ominous reference considering the question. 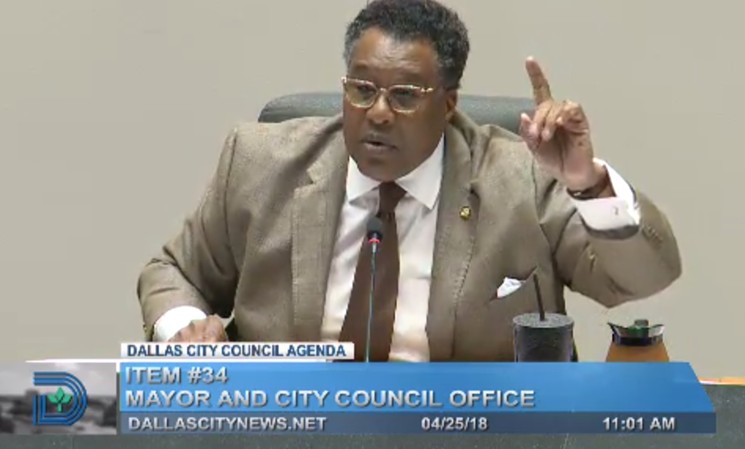 Council member Dwaine Caraway talked his way all around the block at the last council meeting, but he's still a black guy who voted to save the Confederate memorial next to City Hall.
dallascityhall.com
Atkins made a reference to Martin Luther King Jr. and church bombings, painting MLK as the guy who talked people into keeping their heads down and not getting upset, as if MLK’s great contribution to history was accommodation. Atkins, one assumes, owes most of his knowledge of American history to the way it was still being taught decades ago at Southern Methodist University, where he graduated in 1977.


“I won’t be the white council member that’s telling my black leadership around this council what to do.” — Lee Kleinman

Caraway, as always, talked his way all around the block several times, referencing all of the civil rights history he wants to see added to the landscape, not subtracted. The next day, he gave a funny interview to our Stephen Young, saying he wants to see MLK added to the confederate memorial, which may or may not have been a joke. It’s always hard to know exactly when Caraway is being serious.

Except when he votes. A vote is a vote. That goes for all three of them. A vote is a solemn public declaration etched forever into the historical record every bit as hard and deep as that monument was 122 years ago.

The historical fact is that these three African-American city council members talked a majority of the council into backtracking on removing the memorial and into off-shoring the question instead to an open-ended study process with no timeline or deadline. How hard was it to talk Mayor Mike Rawlings into going along? Or Rickey D. Callahan or Adam McGough or Lee Kleinman or Sandy Greyson or Jennifer Gates? Ha! Not too hard at all. They couldn’t wait.

Kleinman even said he had no choice: Ignoring Felder’s position, Kleinman said, “I won’t be the white council member that’s telling my black leadership around this council what to do.”

Thankfully for the sake of history, at least, three white guys and two Latinos decided they could vote against white supremacy even against the wishes of the three black council members. Joining Felder and voting against the motion not to take down the memorial were council members Adam Medrano, Mark Clayton, Omar Narvaez, Philip Kingston and Scott Griggs.

So what do you do in a city like this, where a majority of the black elected leadership is soft on white supremacy? I think you know the answer. Every little chance you get, you utterly and completely ignore them.