HMK’s Khraish Khraish, center, talks to tenants buying one of his rental houses. Mark Graham
An ugly bit of street theater is being prepared for us by certain people at City Hall. When it gets here, I want you to know the real story.

In the first week of June, as many as 200 poor families will be tossed out on the street in West Dallas. When that happens, an entire troupe of grease-painted fakes will line up in front of the TV cameras, fake-weep, fake-moan and claim falsely that they did everything they could for the evicted families. They will all point to the landlord, a company called HMK Ltd., and say, “They did it.”

That will all be one big fat reprehensible lie. The grease-painted fakes have not done one damn thing to keep the HMK tenants in their homes and in their neighborhood. They’ve done the opposite.

So far HMK is the only entity that has tried to help or has proposed real solutions. The name of this play, by the way, will be, Widows, Orphans and Grease-Painted Fakes.

The outline came into sharper focus this week when an obscure arm of the city, the Dallas Housing Finance Corp., announced it will pay Catholic Charities of Dallas at least $30,000 to hand out about $270,000 to help HMK tenants find new homes. That may be fake, too.

We talked about this situation last December. HMK, owned by the Khraish family, took a long look at a tough new housing code passed last year by the City Council and decided many of their West Dallas rental houses were incapable of being brought up to the new standard.

Under the new ordinance the penalties for renting houses in substandard condition are stiff, as maybe they should be. The solution to the city’s bitter lack of affordable housing can’t be putting families in drafty shacks and pretending it’s OK somehow. It’s not OK.

But Khraish Khraish, the younger in a father-son partnership, looked at some of his company’s smaller and older properties and decided that 300 of them could not be brought up to the new rule. So rather than risk personal and business ruin by trying to skate around the rule, he did the responsible thing and announced he was taking those 300 houses off the rental market. That meant 300 families had to move.

What ensued was the kind of chicken-with-its-head-cut-off farce that has become emblematic of Dallas City Hall. Apparently the mayor and council passed their housing standards ordinance without even thinking about the fact that the new tougher rules would knock some number of properties out of the rental market.

HMK became the canary in that coal mine. The estimate I hear now for the total number of household units ultimately to be closed by the new rules citywide is around 25,000. In a city that already has a desperate shortage of affordable housing, losing 25,000 more low-rent units is a human catastrophe.

So what did the mayor and City Council do? Did they call for some kind of temporary hiatus in the new ordinance while the city figures out how to provide replacement housing? Did they establish a relocation program to find new housing and provide assistance to people displaced by the new ordinance?

Of course not. The mayor and his cadre on the council — not including Mark Clayton, Sandy Greyson, Scott Griggs, Philip Kingston or Adam Medrano — sued Khraish, said he was a son of a bitch and tried to seize his company.

So, wait. The mayor and the City Council pass a new law saying Khraish will go to jail if his houses don’t meet a certain standard. He looks at the standard, looks at his houses and decides the right thing is to stop renting the houses. So they call him a son of a bitch and try to seize his company.

“My exposure is instant bankruptcy and criminal charges, because my properties simply do not comply."


I don’t make this stuff up. I just tell it.

Thank goodness, a voice of sanity and conscience entered the picture when the city’s lawsuit came before 95th District Judge Ken Molberg. Molberg told both sides he was not going to tolerate any outcome that made cannon fodder out of the tenants. And, you know, there are moments like this in these city deals when you hear the voice of a grownup, and it’s like a fresh summer breeze after the tornado.

The city agreed to back off from enforcement of the new ordinance until next June 3 so that children in the HMK houses could finish the school year. Once Khraish was assured he wasn’t going to get thrown in jail or fined a million bucks for continuing to rent his houses, he suspended his eviction orders until that same date.

Now we are coming up on June 3. Khraish told me this week that 100 of the 300 families facing eviction already have moved. But 200 families are still in his houses with nowhere to go. He said he absolutely cannot afford to continue renting to those 200 families after June 3 when his agreement with the city expires and he becomes vulnerable to the new penalties.

“My exposure is instant bankruptcy and criminal charges, because my properties simply do not comply,” he said. “I can get literally a thousand dollar a day fine for each of my houses plus criminal charges on top of that, so there is no way I continue without protection.” 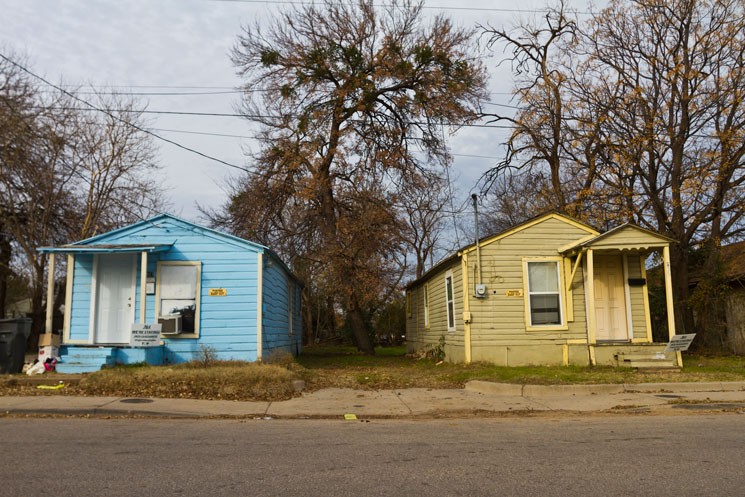 Some properties in West Dallas are too small and too old to be brought up to the new standards.
Mark Graham
He said if he does not evict the remaining 200 families after June 3, “I am literally bankrupt, and I am facing jail time.”

Meanwhile, the mayor and City Council not only have done nothing to provide new affordable housing in Dallas, but last October the mayor and his group, including Monica Alonzo, whose council district includes the threatened HMK families, voted down an ordinance forbidding discrimination against poor tenants who can pay their rent using federal housing vouchers. It was the one meaningful pragmatic chance the council had to open up new housing choices to poor people who pay their rent on time. They voted it down.

Let’s keep track of where this leaves things. On June 3, if Judge Molberg does not get the city to agree to a new deadline, Khraish will have no choice but to evict the 200 families. Most of them will find they have no place to go within the city, because an already stingy affordable housing supply is being drastically choked by the new standards.

Then this week, along comes the $300,000 grant to Catholic Charities by this obscure city entity. Won’t that help? No. Not really.

Some of that money is intended to be spent on relocation assistance. The city still has thousands of poor renters who must surrender federal rental assistance vouchers every year because they can find no landlords who will accept them, especially since the City Council voted down the anti-discrimination ordinance. So even if the HMK tenants get some cash to help with moving, what good will that money do if they have no place to move to?

And then some of the money is supposed to be available for repairs to places they might move into that may not meet the new code. Interesting idea. But the money specifically is not available to HMK — another indication that it’s some kind of stupid City Hall joke anyway.

I asked David Woodyard, CEO of Catholic Charities of Dallas, who is going to charge $30,000 for dispensing the money, if he will be helping the HMK families find homes or will just wait for them to figure that out on their own and then offer them some money once they do. Did not hear back.

But if none of them does find a new home, if the deadline on Khraish is not extended, if June 3 rolls around and those families get evicted, I can tell you exactly what will happen. The day it happens will be the day of the play.

The mayor, Monica Alonzo, Catholic Charities and probably some of the predictable advocacy groups will gather in front of the TV cameras and weep and wail about everything they did to protect these poor suffering families. They will pantomime their grief and act out their compassion and their moral superiority. They will all point to Khraish Khraish. They will wail and cry for his wickedness.

Please know that this will all be one big fat lie. Khraish and his father have done everything possible that private individuals could do to stave off this catastrophe. The mayor, Alonzo and their posse on the council are the ones who made this happen.

In real life, not in plays, I usually don’t believe in heroes and villains. We all have feet of clay. Most of us do the best we can and fall far short on occasion. But I see this coming.

I see the other side framing this so that they can make villains of the Khraish family. If those are the terms on which they want to act this play, then I want you to know that the real heroes in the play are the Khraishes. You know by now who the real villains will be.