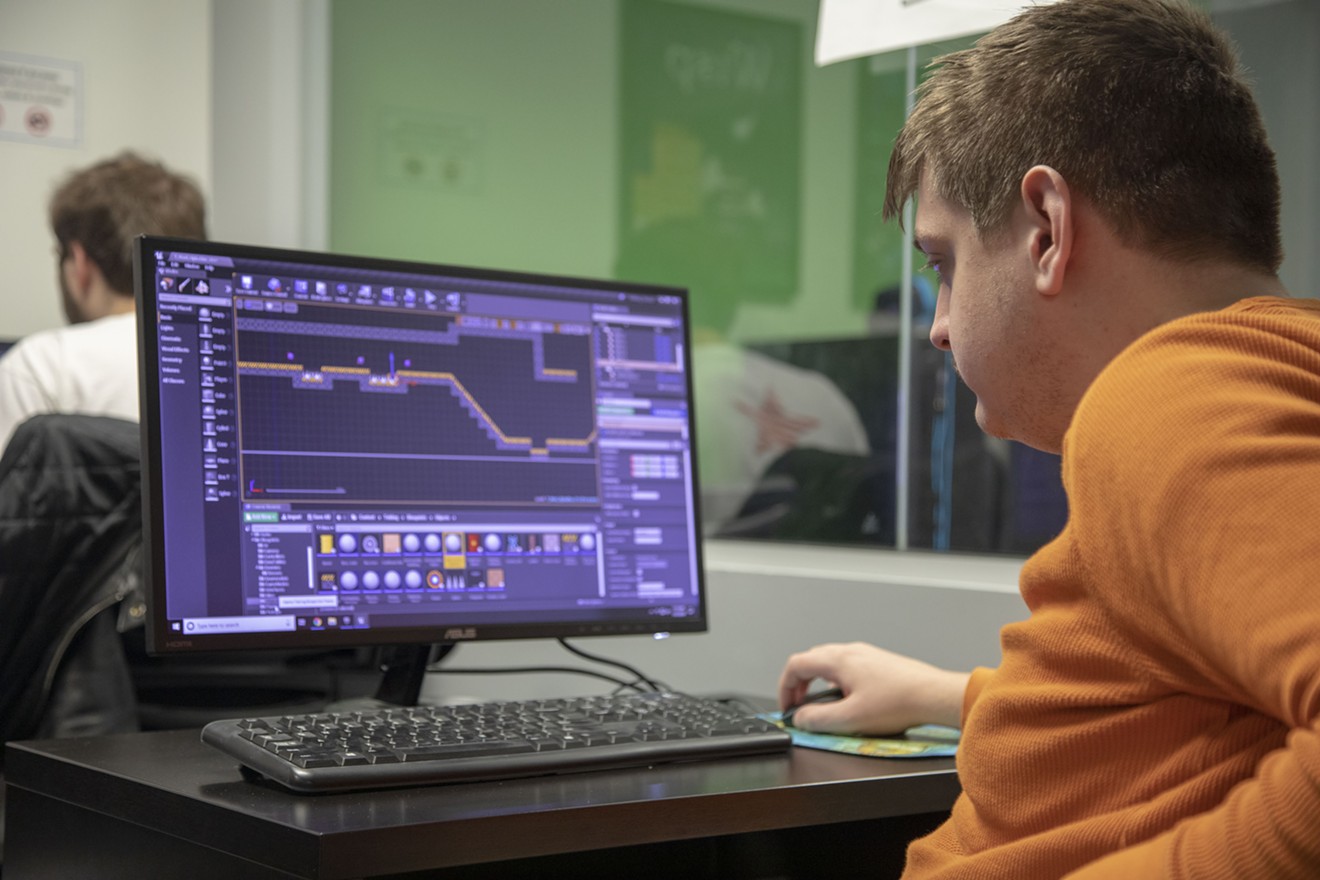 Thomas Ward, a Crew designer of nonPareil Institute, works on his assignment, called a Quest, to test a video game level using game development program Unreal Engine. Jubenal Aguilar
Mark Theurer knew his son Alexander would not be ready for college after he graduated from McKinney Boyd High School.

Alexander connects to the world in a different way, and art is his nexus between him and others. He’s been submersed in creativity nearly his whole life. At 3, Alexander drew giant pumpkins on his bedroom walls during Halloween. Soon after, he would squeeze bottles of chocolate syrup onto his parents’ kitchen floor, creating designs. Around this time, Mark learned Alexander was on the autism spectrum.

Despite his condition, Alexander honed his artistic abilities and taught himself to draw, sculpt and use computer applications. Eventually, he learned how to create digital images in Photoshop and make stop-motion movies using Adobe Premiere and Windows Movie Maker. Alexander’s interest in art grew during his high school years, and he received recognition for his talents.

“He got an art award and was in an art show in downtown McKinney,” Mark says. “All of this cool stuff, but he wasn’t ready to move out of that high school transition phase into classic work like I did when I got right out of high school.”

Unlike most of his friends, Alexander lacked certain soft skills needed to level up life’s social tiers, which gave him fewer educational and vocational opportunities. While Mark sought options for his son, he discovered nonPareil Institute, a Plano-based nonprofit that helps autistic adults hone their tech skills by teaching them the nuances of video game development and digital design.

Nonpareil is a French word meaning “having no match or equal.”

“Coming here was his opportunity to really grow as an artist and branch out into different styles and genres and needs that nonPareil had in terms of building apps and assets,” Mark says. “But then he also had an opportunity to grow very much on the social and soft skills side.”


“But then he also had an opportunity to grow very much on the social and soft skills side.” – Mark Theurer


Now an instructor, Alexander teaches other young adults on the spectrum how to use programs, such as Photoshop, in a computer lab on campus. In 2017, Mark joined his son and became nonPareil’s director of operations.

For most like Alexander, the institute is a place where adults on the autism spectrum can work comfortably with others in a professional atmosphere. And for most of them, nonPareil is their first step toward a shot at a white-collar career.

Technological Solution
According to the Centers for Disease Control and Prevention, autism prevalence in the U.S. is growing, with about one in 59 children identified with autism spectrum disorder, or ASD. Only 36 percent of youths with ASD had ever participated in post-secondary education, while 58 percent had ever worked during their early 20s compared with those with other types of special health care and service needs, according to the U.S. Department of Health and Human Services.

For nearly a decade, nonPareil, which operates from a unit on Southern Methodist University’s campus on Tennyson Parkway in Plano, has enrolled adults to help counter the lack of workforce options for autistic individuals.

Inside nonPareil’s studio, young men and women sit in front of desktops, scrolling over screens and typing code into various computer programs. Chris Jeffreys, a lead designer and student instructor, guides a couple of students, referred to as Crew, through a training session. Under Jeffreys’ instruction, Thomas Ward, a Crew designer, tests a video game level in Unreal Engine, a game development program, as part of his assignments called Quest.

While Jeffreys guides Ward through Unreal, his brother Adam, a Crew-turned-lab instructor, helps another student construct a game level. The program is flexible and self-paced, and though nonPareil emphasizes video game and app development, the institute offers other technical training, such as 3D modeling, digital imaging and graphic design.

Since nonPareil’s inception, Crew have launched about a dozen games available on the Apple App Store, PC Steam and Google Play Store, as well as other products for market.

The concept of nonPareil is not to put out hit games. Instead, the program aims to equip Crew with both technical and soft skills to succeed in a digital technology field or any industry. However, nonPareil is not a school. It is a community, a place where adults on the spectrum can connect and communicate in an environment compatible with their social strengths.

“We obviously promote video games, technical training, soft skills and hard skills, but this community thing is not to be undersold,” says Gary Moore, co-founder and CEO, who has a 23-year-old autistic son. “For a parent, it’s just great to see your kid belonging somewhere and having friends.”


“For a parent, it’s just great to see your kid belonging somewhere and having friends.” – Gary Moore


Kick-Start From the Kitchen
About a decade ago, Moore teamed up with Dan Selec, a computer programmer, who also has a son on the spectrum, to confront a big question most parents with autistic children face: What will my child do when they grow up?

Moore says Selec envisioned building a tech company that trained adults on the spectrum to design video games. In 2009, the two kick-started an experimental program from Selec’s kitchen. There, Selec set up a workstation and taught eight young adults the fundamentals of computer programming while Moore marketed the operation.

“I was doing fundraising in my kitchen, and Dan was training young men and women on the spectrum in his kitchen,” Moore says. “They would come over after he got home from work. Once a night, for a couple of hours, he would sit them at his kitchen table and teach them the basics of video games.”

At the time, Moore and Selec did not charge tuition or officially enroll students. For a little over a year, Selec worked with the first Crew from his kitchen, and Moore searched for bigger space.

Soon after, Moore says they received a donation of around $250,000, which allowed them to quit their day jobs and focus on expanding the program.

“That’s when we got serious about finding space,” Moore says.

In fall 2010, Moore and Selec moved the Crew into a small room in SMU’s Plano sub-campus. Moore says the campus director was enamored with nonPareil and accommodated space for the program as it grew.

After establishing a hub at SMU, more Crew enrolled, growing from eight to 150 over the next three years. Now, nonPareil occupies the entire first floor of the unit they moved into nearly a decade ago.

Growing Community
Villarreal says 2018 was a pivotal year for nonPareil. Last fall, the institute received a couple of grants, including one for $25,000 from a partnership between GameStop and Autism Speaks, and another from AT&T. She says both will help expand services and programming. A couple of weeks ago, GameStop reps visited the campus to see the GameStop Code Base, a new lab installed with the grant, with a room called Mos Eisley, a Star Wars reference.

Last year, staff and Crew used #PoweredByAutism, a hashtag they coined to promote ASD awareness, on social media and started an improv comedy troupe, Irregular Nonsense, which performs the first Saturday of every month at the Stomping Ground Comedy Theater in Dallas.

NonPareil also has an office in Houston, and in 2017, launched a program in Austin. Moore says the team is trying to stretch the operation to other places, such as Fort Worth, Orlando and Connecticut.

Moore says other organizations provide autistic adults with technical training, but he’s seen none in the same format as nonPareil. He says people visit the campus and become intrigued by the institute’s hands-on model.
Moore says nonPareil will continue to train adults on the spectrum to become familiar with work requirements expected at real-world companies, which include completing projects, meeting deadlines and working with others. But what is most important to the team at nonPareil is its growing community.

During a Thursday afternoon, Crew gathered in a room down a hall from the studio to celebrate birthdays for January. With a couple of Crew carrying potato chip bags and soft drinks, and after days of developing game designs through sheer synergy, they throw an end-of-the-month aggregated birthday party, which happens on the last Thursday of each month. Like Alexander, the Crew have a chance to fit in on an equal playing field at nonPareil, where they connect and innovate with colleagues and friends.

“That loss of community is a big thing,” Moore says. “So, when a parent sees their kid eating lunch and hanging out with others, and they go home and say, ‘I have a friend’ or ‘I’m going to the movies tomorrow night with a friend,’ the parents just start bawling because now they see hope for their kid to have a place to belong.”
KEEP THE DALLAS OBSERVER FREE... Since we started the Dallas Observer, it has been defined as the free, independent voice of Dallas, and we'd like to keep it that way. With local media under siege, it's more important than ever for us to rally support behind funding our local journalism. You can help by participating in our "I Support" program, allowing us to keep offering readers access to our incisive coverage of local news, food and culture with no paywalls.
Make a one-time donation today for as little as $1.