Not long ago, a young newlywed couple came into Sara Lee Goffs Plano store looking for the first piece of furniture for their new apartment. They needed a couch, and Goff had just the thinga large, softly curved number, more a huge cushion than a sofa, but its ergonomic design was exactly what they were looking for. It was just made for screwing.

No, really. Thats literally what it was made for; its S-shaped curves provide backor maybe front and sidewayssupport for the different positions so loved by limber young couples. Ring up another sale and another (presumably) satisfied customer for Goffs Condoms to Go. Heres hoping the couples marriage outlasts their furniture. (While were at it, lets hope theyve heard of Scotchgard. Eww.) What they may lack in taste, they appear to make up for in enthusiasm.

Taste, hope, satisfaction, comfort and sex: Its all part of the romance business for the diminutive Goff, a 60-something grandmother who left a career in landscaping design to open her first shop for sexy Dallasites in 1992. Since then, her chain of prophylactic, lube and novelty shops has grown to a chain of stores, the latest called Saras Secret, a name she adopted to avoid a repeat of run-ins she has had with religious folk who would rather not see the word condoms glowing in red neon letters on suburban storefronts. Its the same merchandise, minus the picketing, the protesters writing down her customers license plate numbers and the visits from local cops. Well, cops still visitin fact, Goff says she works closely with local police chiefs to allay any community worriesbut they come in as customers these days.

If I went in under Condoms to Go, I guarantee you theyd be picketing me, Goff says of the new name.

I just sell them, Goff says. I dont ask them what they use them for.

Ah, Texas. It may be 2006 in other parts of the worldEurope, say, or New York. Here, were still creeping up on the new century, sexually speaking. Not that its slowed down Goffs business any. Two years ago Condoms to Go was named one of the top 100 fastest-growing businesses in DFW by SMUs Cox School of Business.

Sorry. Went all Beavis on you there for a moment. Where were we?

Goffs own inspiration came from her sonsort of, and not like that, you sicky. Shed been divorced several years and had raised her two kids when she decided to re-enter the dating scene. This was the age of AIDS, however, and her college-age son had some advice. If youre going to be promiscuous, you need to be safe, he kidded her. Not long after came her first store on Greenville Avenue. Since then, its been a long, sometimes bumpy ride to create a place where customers can be comfortable shopping for lovemaking aids.

Comfort is key for Goffs business plan. She carefully trains her staff about various products. She will sell to teens but only provided they first stop by with their parents, and she makes sure that some of the racier products dont end up in window displays. That care helps explain why the majority of her customers are womenparticularly in her suburban shops, where sometimes as much as 75 percent of her customers are female.

They can go into any of my stores, and they feel comfortable, not like drugstores, Goff says.

Oddly, its often men who get most embarrassed perusing the goods. Theyll eye a novelty but figure the missus wont want anything to do with it, Goff says. They say, My wife would not like this...She wouldnt let me bring this home. Id be divorced. And often enough, the women come back to close the deal.

Whole Foods, we love you, but sometimes we need household cleaning products that aren't made with lemons (you also don't sell Fritos). Albertson's, you work, but you can't satisfy our craving for fresh basil pesto and imported chocolates. Until someone learns to combine these two extremes under one roof, Lovers and Greenville is still our best option. Tom Thumb's Old Town store (5809 E. Lovers Lane) is great for the basic essentials--toilet paper, garbage bags, Oreos--and it also stocks Natural Lay's, Ruffles and Cheetos, which are a million times better than any of the fancified kettle chips you'll find across the street (trust us). Central Market (5750 E. Lovers Lane), on the other hand, fulfills all of your freshest needs, while indulging our foodie flair. If you plan it right, you can make it in and out of both stores in about an hour, just in time to prepare your fresh Atlantic salmon and unclog that bathroom drain.

While he's not the only fountain of knowledge to be found at a Dallas record store (the old guys at CD Source could probably fill a canyon with all the records they've owned over the years), Good Records' C.J. Davis is undeniably the most enthusiastic, always eager to hip us to his latest musical discovery. You'll never see him roll his eyes at your guilty pleasure purchases either. No snarky High Fidelity attitude here. The guy will talk your ear off about music if you let him, and though his recommendations might not hit the mark 100 percent of the time (we're still not sure how we feel about Tunng), you'll at least hear something you wouldn't have otherwise. Thanks to C.J., you just might end up with the kind of record that will last you through 1,000 rainy days.

This is not a Best of award for every Whole Foods store on earth. This is specifically for the Lower Greenville store, because it has more East Dallas history than corporate Whole Foods probably even knows about. This store really started out across the street in the early 1970s when Harper's Head Shop began selling Tiger's Milk Bars and found there was more money in food than bongs. H&M Groceries evolved, which later became Bluebonnet, which then moved across Greenville to the current location. Whole Foods bought the store in 1986--the fifth store in the chain. It's small for a Whole Foods these days, but that just gives it the perfect intimacy for Old East Dallas, of which it is a treasured and essential element. Open every day, 8 a.m. to 10 p.m.

Rats. The milk's soured and the ground round's freezer-burned. Nothing to do for that but order in--again--or trek to the supermarket. It's a ponderous task, but the Kroger Signature Store on Mockingbird Lane offers some accoutrements other area grocers cannot and avoids those that make for a frustrating shopping trip. If you just need some garlic, why sift through 1,000 different kinds at the gourmet grocers? Kroger's got your plain and simple cloves. Here's the value-added part: The foodstuffs look good, but there's other stuff to look at too. By the fried pies are some cutie-pies. Scanning the fresh fruit are some ferocious SMU frosh. Yes, the selection is fine--from foreign foods to sushi--but the eye candy is even more divine. Like the '80s scene at the Old Town Tom Thumb, this has become the store that's now destination uno for anyone with "tasty hookup" on his or her shopping list. 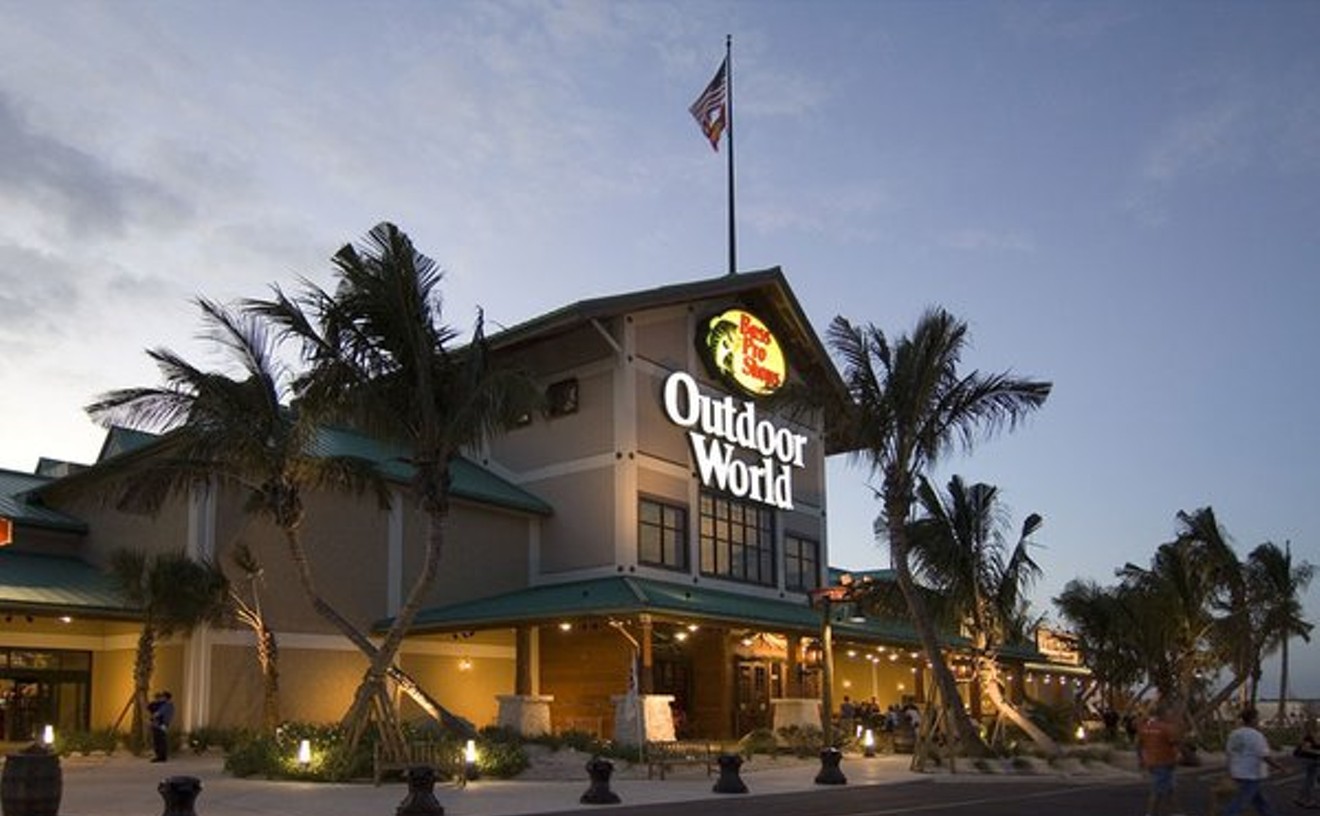 Keep your shirt on! We know you can't buy a suit at Bass Pro Shops. And we're not recommending it for skaters or head-bangers. Sheesh. Be a little broader-minded, OK? We're just saying that for a broad mid-range of casual and outdoorsy clothes, it's a great place to shop. The store brands, Redhead and Bob Timberlake, offer reasonably priced pants and shirts in a variety of styles, from office-appropriate to fish-camp. Just up from those in price are Woolrich and Columbia, with the high end at Tommy Bahama and Callaway (golf). Of course, what every man really needs is a pair of $110 Filson khakis so tough a bear couldn't bite 'em. But not every man knows that. Yet.

Tents and camp stoves and solar showers and all of that stuff you need for camping--at least in the lower to middle price range, it's all pretty generic nowadays. Everybody has the same brands. So the point is to pay the lowest possible prices. Academy consistently hits that mark, with fully stocked shelves and friendly salespeople who give you the impression they actually like working there. The merchandise covers a broad range of outdoor activities, from camping to backyard grilling to passing out in a hammock.

Sometimes people get the idea that REI is a camping store only for extreme rock-climbers and people who trek through the Alaskan wilderness, which is not really right. They have some of that stuff, but more of what they offer is aimed at the average family willing to shell out some extra bucks for equipment that will last. Small tents at REI, for example, cost $50 to $100 more than the ones at the big-box stores, but REI's tents are just about bullet-proof, backed by a no-questions-asked lifetime satisfaction guarantee. And anyway, haven't you always wanted titanium tent stakes? Sure you have. The store's tricky to find: You have to drive westbound on the north service road from Welch toward Midway and watch for it on your right, set back from the road.

In the years since they set up shop at the corner of Abrams and Gaston, Green Living has become much more than simply a store. Their seminars--including those on gardening, keeping chickens and being bat-friendly--are informative and usually include tasty baked goods. They've launched community efforts to keep electronics out of the landfill, and their Web site is a cornucopia of info on how to live greener in the metroplex. The 10 principles by which they select what products they sell--including sustainability, recycled content/biodegradability and fair trade practices--ensure that whether you're picking up a onesie, a low-flow showerhead or a gallon of no-VOC paint, you can purchase with a clear conscience. 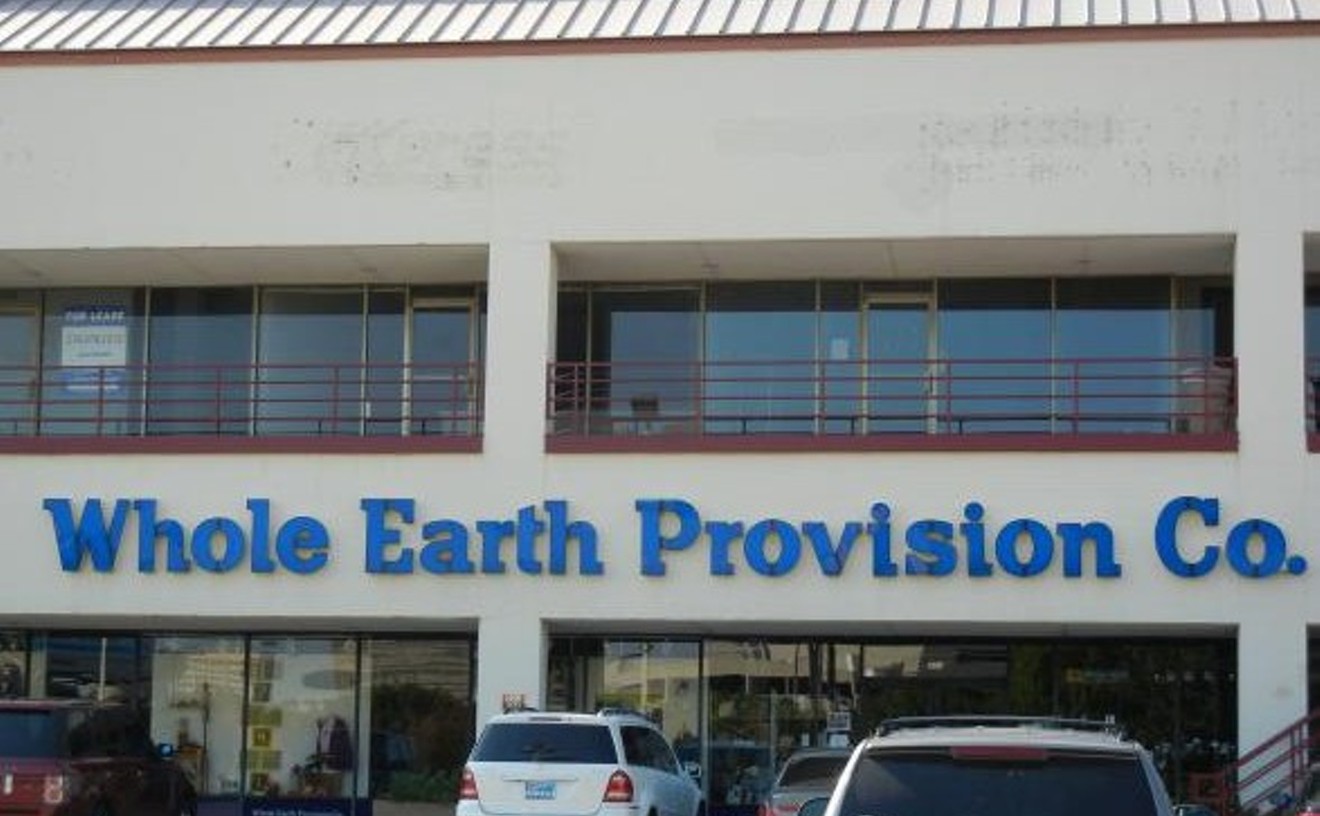 Amazing "tech" fabrics have been invented for outdoor wear. They keep you dry but not sweaty, cool but not wet, warm but not itchy, even bugless. Whole Earth sells the best selection, including socks and caps in "Smartwool"-- real wool from real sheep but re-jiggered so it never gets scratchy. This is where you also can get Prana knickers in a blend of nylon and Spandex that's abrasion- and wrinkle-proof and also quick-drying. Mountain Hardware jackets here are made of "conduit silk" to let them breathe. Or you could go for a Marmot hoodie made of "microporous polyurethane impregnated with silicon dioxide particles." How about Ex Officio's "Buzz Off" line? The clothes themselves repel mosquitoes, ticks, ants, flies, chiggers, midges and charging rhinos, according to the label. Well, not the rhinos. We made that up. But it might work if you put the clothes on first and then run real fast.