Which Drug Goes With That? A Pharmaceutical Companion to Coachella's Lineup If you ask us, Gorillaz goes best with LSD. Andrew Sherman
Welcome back, you flower-crown-wearing, FOMO-afflicted people. It’s time, yet again, to get hyped for Coachella. The pricey festival known for its epic lineups, lack of sanitation and oversaturation of influencers is back at it again. And in keeping with tradition, this year’s roster, announced on Tuesday, is pretty solid and includes big names such as Bad Bunny, Rosalìa and Frank Ocean.

At first glance, the lineup is diverse, both musically and culturally — which, when considering the festival owner’s anti-choice, anti-LGBTQ history, is interesting, to say the least.

At any rate, if you’re dead-set on attending the Chick-fil-A of music festivals and you hate fascists, make the most of the lineup with our handy pharmaceutical companion. Here's a list of which substances go best with each act.

Just so we are clear, a disclaimer: The author, the Dallas Observer and Voice Media Group do not advise the use of illegal drugs — especially not the cheap crap sold at festivals by nameless dealers who can disappear into a crowd of thousands of denim-shorts-wearing people with their phones up. However, based on the sounds of these artists, here is what we believe other people who do drugs who are not us will want to take in order to enhance the experience.

Bad Bunny
Everyone’s favorite Latinx sadboy is here for you, for all of us. "Conejo Malo" is the reggaeton gift that keeps on giving — mixing pop, punk and even trap into something altogether new, fun and guaranteed to be a good time.

Pairs with: Fruity Pebbles and a blunt.

Gorillaz
No, that’s not an NFT, that’s the Gorillaz. This legendary virtual band is hard to define — you just know it when you see it because it's animated. Electronic? Alternative? Hip-hop? Yes.

Burna Boy
Nigerian Afrobeat magician Burna Boy has mastered the art of generating deep, lucid, soulful bops on topics like sex, love, anxiety and even politics — and he does it in a way that renders listeners incapable of having a bad time.

The Chemical Brothers
This iconic trip-hop, electronic group has been making music since the 1980s, and they have yet to slow down. Their style is somewhere between psychedelic sensory overload and electrified mosh pit.

Kaytranada
One of the more prolific collaborators in the industry today, Kaytranada fuses pop, funk, hip-hop and house music together to produce some of your favorite bangers. His use of craggy beats, ultra-cool lyrics and unexpected but perfectly timed transitions makes him one of the most exciting artists on the bill.

DOMI and JD Beck
French-born keyboardist DOMI and North Texas drummer JD Beck have been jamming since they were wee children. Their hyper-focused jazz is frenetic, cool and actually revolutionary.

Pairs with: Adderall, a nicotine patch and deep meditation. Focus.

Pairs with: Coke you found in your cool aunt’s jacket from the '80s.

Becky G
Disco-pop meets reggaeton in Becky G. Her songs are infectious in all the best ways. At a glance, she might appear too “cute,” but her lyrics suggest she’s an artist driven by passion, empathy and optimism.

Pairs with: Mexican Coca-Cola and Acapulco Gold.
click to enlarge 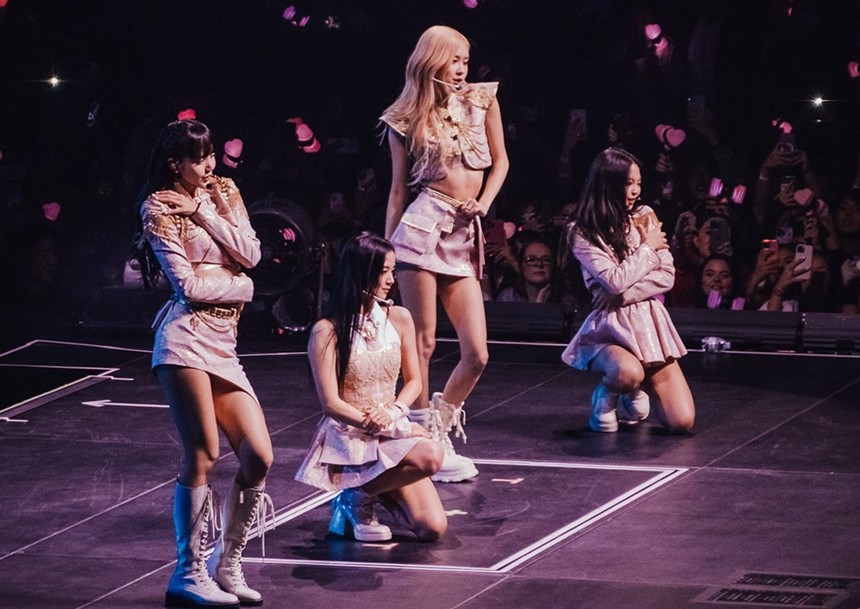 Lisa, Jisoo, Rosé and Jennie put on quite the show as Blackpink.
Rachel Parker

Blackpink
When we think of K-pop, we think of Blackpink. Though you can think of BTS if you want. Sure, on the surface Blackpink may be just another cookie-cutter girl group, but upon further inspection, you’ll find bilingual lyrics, multi-genre styles and unmatched stage presence that, if anything, will make for an entertaining show.

Pairs with: Strawberry Soju and edibles.

Rosalìa
A classically-trained flamenco and jazz artist, Rosalìa’s artistry is rooted in tradition — however, she’s shown herself to be a wildly versatile reggaeton-influenced pop-star, capable of producing genre-bending bops for everyone.

Pairs with: Trifásico with an extra shot and MDMA.

Eric Prydz presents Holo
One of Sweden’s premier house DJs, Eric Prydz has a history of taking a good song and transforming it into an absolute banger that defies space and time.

Boygenius
Folk-indie supergroup Boygenius embodies “girl power” in a way that isn’t trite or gimmicky. This collective integrates each member’s talents into a powerful, relatable deep-dive into life, relationships and the art of emo.

Pairs with: Liquid Death and half of a Xanax.

$uicideboy$
This hip-hop, horrorcore duo made a name for themselves incorporating sensationalism into their abrasive, Soundcloud-esque beats. It’s giving ICP 2.0, and that’s definitely a whole vibe.

Pairs with: Methadone or heroin.

The Kid Laroi
Also known as “Not-Bieber,” the Kid Laroi has proven himself to have staying power in an industry saturated with adorable little fuckbois who can rhyme. His take on the intersection of pop and rap is catchy, for sure — just don’t forget your puka shell necklace.

Pairs with: Vyvanse and a Capri Sun.

Pairs with: Poppers. Not here for a long time, but it’ll definitely be a good time.

Labrinth
With unmatched vocals, an affinity for songwriting and the ability to create some of the most addictive sounds known to man, Labrinth is the producer we didn’t know we needed. And he took an already badass show (Euphoria) and made it 10 times more memorable.

Pairs with: A drop of fentanyl off the tip of your dealer’s blade.

Pairs with: Nothing. Rebillet's show is the drug.

Pairs with: Sleepytime tea and an ibuprofen.
click to enlarge You don't need much in the way of stimulants to enjoy Kali Uchis, but here's what we believe goes best with her show.
Mikel Galicia

At his core, Frank is a storyteller. The way he’s able to perfectly articulate the feelings behind some of our more complicated emotions is, in a word, genius. He masterfully blends R&B, hip-hop and moody, atmospheric pop into exactly what you need, when you need it.

Pairs with: “Ice cream cake” and ghosting your friends in the group chat

Björk
If Björk’s not an alien, she was definitely sent by aliens to show us what the universe feels like. Known for thundering beats, poetic lyricism and ethereal arrangements, this artist is sure to give a memorable performance.

Kali Uchis
Kali Uchis is the human embodiment of slow jams and chill vibes. Singing in both English and Spanish, she celebrates her Colombian and American roots, with noticeable nods to neo-soul, R&B and hip-hop.

Pairs with: Clove cigarettes and a hot toddy.

Porter Robinson
Wholesome, ambient, cinematic pop music for the soul — that’s what Porter Robinson offers this year’s festival-goers. Robinson’s like if the Chainsmokers were good. Get ready for exquisite, low-fi beats, sugary pop vocals and melodic instrumentals that are guaranteed to refill your dopamine levels before the next set.

Pairs with: K2 and a lime La Croix.

A Boogie Wit da Hoodie
Thinking about getting into rap, but don’t think you’re hard enough for the classics? ABWDH is a pretty safe bet. As far as rappers go, this artist leans more toward the melodic side of the genre, leveraging his own heartbreak and autotune to get the party started.

Pairs with: Bodega bags and “popcorn”

Dominic Fike
This Florida native is like if grunge, indie and underground hip-hop had a kid with an Apple logo face tattoo. Fike’s ability to seamlessly weave in and out of music genres while staying true to his raw, gritty guitar sound is the epitome of ultra-cool.

Pairs with: An acai bowl and a grape-flavored blunt.

Jai Paul
One of the groovier artists on this year’s Coachella lineup, Jai Paul has a sound that could be described as being at the crossroads of electronic and R&B, but with a weird, almost haunting element that’s hard to define. However you slice it, his music is an entire mood — the kind you’d expect at a cool, underground art show.

Pairs with: Tylenol 3s and water from your closest sommelier.
KEEP THE DALLAS OBSERVER FREE... Since we started the Dallas Observer, it has been defined as the free, independent voice of Dallas, and we'd like to keep it that way. With local media under siege, it's more important than ever for us to rally support behind funding our local journalism. You can help by participating in our "I Support" program, allowing us to keep offering readers access to our incisive coverage of local news, food and culture with no paywalls.
Make a one-time donation today for as little as $1.