Newly Free Rick Ross Gave a Solid Performance, But He Was Upstaged by Dallas Talent 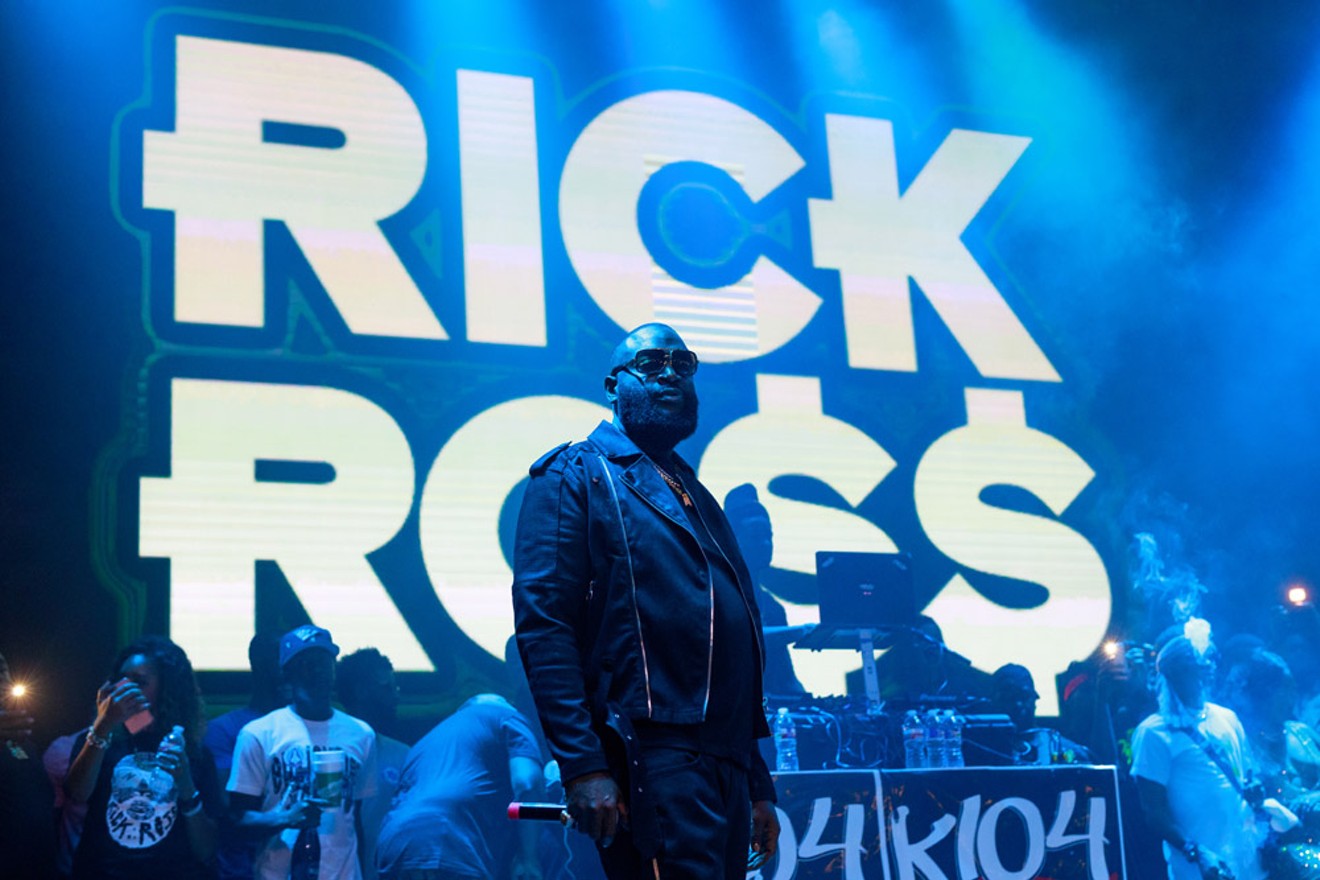 Rick Ross has more to celebrate than ever before. At 41 years old the superstar rapper from Miami is reaching new heights in his decade-long career with the release of his ninth studio album, Rather You Than Me. It debuted at No. 3 on the Billboard charts with 70,000 album sales, and critics and rap fans are praising it as his best and most introspective lyrical work to date.

Yes, it seems Ross is finally earning the nickname "the Bawse," which he gave himself before his 2006 debut LP. Outside of music, the rapper also recently celebrated a legal victory. In June 2015 he was charged with kidnapping and assault, and earlier this month he was sentenced to five years probation. Last week he showed off the removal of his ankle monitor in an Instagram video, which promptly went viral.

All of this news made for a celebratory one-off performance at Dallas' Gas Monkey Live! on Thursday. But while Ross' performance was strong, it still wasn’t the most remarkable moment of the evening.

That credit goes to the openers, a collection of Dallas hip-hop talent assembled by presenter Piscapo Ent., who looked beyond the Deep Ellum regulars. The Outfit, TX play Elm Street frequently, but also in the mix were lesser knowns from outside the city center, such as Mo3, C Struggs, Uno Loso, Don Chief and newcomer Imaj.

The show's organization wasn't flawless. There were a few head-scratching moments – such as when The Outfit, TX performed one song and then left, with a 10-minute gap before the next artist took the stage – but there were plenty of other redeeming moments.

Oak Cliff rapper C Struggs reconnected with Rick Ross last night after the two put out a song together in 2016.
Mikel Galicia
Mo3 and C Struggs were the clear standouts. Fresh off signing a record contract with Epic Records, Mo3 effortlessly showed off his falsetto-heavy rap stylings, reminiscent of his idol Boosie Badazz. His a cappella flow on the song “All The Way Down” was particularly captivating.

But of the local openers, C Struggs took home top prize. The Oak Cliff resident has gained a reputation for his storytelling and the vivid imagery in his music videos, which are all filmed in South Dallas. He was discovered by Rick Ross when a stripper reposted a video of heavyset C Struggs on Instagram, with the intent to make fun of him.

Numerous people tagged Ross, himself once obese, and he ended up contacting Struggs about working together. The two put out a song, "Do It," and during Ross' headlining set, Struggs remained by his side, sipping on a bottle of Belaire Rosé. (Ross is the brand ambassador.)

Dallas' presence was also felt in other ways throughout the evening. The night’s host was K-104 DJ Hollywood Bay Bay, who teamed up with DJ Duffey and DJ Poison Ivy, the official DJ of the Dallas Mavericks, to entertain the crowd before co-headliners Ross and Trina took the stage.

Rick Ross running through his catalog of trap-influenced hits.
Mikel Galicia
Between the three of them damn near every classic Dallas song was played, from Mr. Pookie’s “Crook For Life” to Big Tuck’s “Southside Da Realist,” Treal Lee and Prince Rick’s “Mr. Hit That Hoe” and Fat Pimp’s “Roll Me Up.”

When Ross walked out, it was to his 2012 feature hit “Ima Boss.” He strolled onto the stage with the confidence of a veteran and seemed on a mission to prove he's still on top of the rap game after a troublesome couple of years.

That idea was cemented during his second song, when he took it back to the beginning of his career with “Hustlin.” Eleven years later the track still holds up. In fact, trap-influenced bangers like it are still his bread and butter, as evidenced by “Trap Trap Trap,” the third song of the set and first from his new album.

From there, Ross satisfied his fans by running through his catalog of hit features, including "Pop That,” “All I Do Is Win” and “Bugatti.”

The Bawse wasn’t wordy either. He was short on banter and let a hype man do most of the talking between tracks, but it didn’t dampen his performance in any way. The night might have been more successful if he'd played off his newfound freedom, but it was nevertheless a strong night for Ross and for Dallas hip-hop.